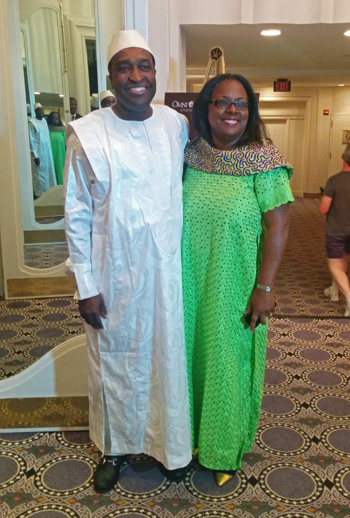 Yolonda Richardson, an international development expert, and her husband, Ambassador of Benin Omar Arouna met in New York City while they both worked for Africare, where she was his boss.

As an American who is married to an African ambassador, Yolonda Richardson is proud to be “a citizen of the world.” The wife of Benin’s ambassador, Omar Arouna, Richardson has been to 50 countries, mostly on her own, and worked with important NGOs almost all of her life, becoming a sought-after expert on international development issues.

She is currently executive vice president of global programs for the Campaign for Tobacco-Free Kids, which fights to reduce tobacco use and its deadly toll in the United States and around the world. She was also president and CEO of CEDPA (Centre for Development and Population Activities) for five years, in addition to holding top positions at Africare and the World Health Organization. As president and founder of Richardson Consulting, she provided expertise to a range of nonprofits, development agencies and major corporations including ExxonMobil and the Carnegie Corporation of New York. Richardson also speaks and lectures regularly on international development issues and has appeared in media outlets such as the Associated Press, Christian Science Monitor, C-SPAN and National Public Radio.

“Now, I have a balancing act with three jobs: the campaign, my husband and being a mom. We have a nanny from Benin and she is worth every penny. She makes a huge difference in our lives,” Richardson said.

The mother of a son and daughter who married her husband 14 years ago, Richardson said she has enjoyed representing Benin, a West African country of 10 million that enjoys a stable democracy but still struggles with issues such as poverty. “Benin is a lovely country, small and off the radar screen, secure and safe, with beautiful beaches and lots of cultural attractions. The art community is phenomenal,” Richardson noted.

She finds that many people in Washington “don’t quite know where Benin is, and yet I’m surprised how many do know. Benin is peaceful, in the news for the right reasons,” Richardson said, crediting the Peace Corps for spreading the word about this quiet nation and being “ambassadors for the country.”

Her husband became Benin’s ambassador to the United States, Mexico and the Organization of American States in May of last year. Previously, he worked for 20 years as an information technology officer for the World Bank. In 1997, he became IT manager for the nonprofit Africare, and in 2001, he was named managing director for the consulting firm Global Specialty. Ambassador Arouna also worked for the lobbying firm GoodWorks International, where he was promoted to executive vice president in 2013, and as a consultant with Opportunities Industrialization Centers International, a nonprofit that focuses on aid to sub-Sahara Africa.

Richardson and Arouna met in New York City while both worked for Africare, where she was his boss. “He left a year after I left. We saw each other out dancing one night. We danced — he was a very good dancer,” she recalled. “He said, ‘Since you are no longer my boss, I want to ask you out.’ That was 2001. We were married in 2004.”

Both are interested in making a difference and often have conversations of how to help in particular situations. At the Embassy of Benin, Richardson said that her husband sometimes draws on her background as a CEO and a manager to help manage staff, build relationships or write reports.

“I try to keep my roles separate, not confusing them,” she explained. “I take off my advocate’s hat, unless someone asks me about something specific.”

Richardson, who holds a master’s degree in public health from Columbia University and a law degree from Yale, has advocated for international development, global health, reproductive rights and global philanthropy. She worked to raise the profile of CEDPA, which seeks to advance women’s rights and expand their access to health and other services through partnerships with more than 150 organizations in 40 countries. At Africare, she oversaw the program design, implementation and evaluation of more than 150 rural development projects throughout Africa focused on community health, agriculture, democracy and governance. She also spent 10 years at the Carnegie Corporation of New York, a global foundation, where she managed an international grant program focused on improving women’s health and programs and promoting improved democracy and governance. 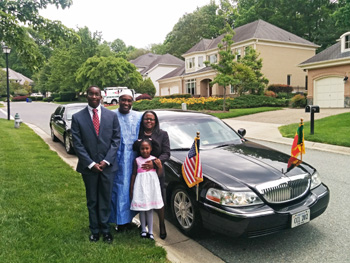 Yolonda Richardson and her husband, Ambassador of Benin Omar Arouna, along with their son Samad, 18, and daughter Rihanna, 7, prepare to go to the White House for his credentialing ceremony in May 2014.

Richardson’s attention is currently on “the Campaign,” as she calls it, a global effort “to prevent kids from ever smoking.” The Campaign for Tobacco-Free Kids aims to tackle the world’s leading cause of preventable death by advocating for public policies that keep children from smoking, help smokers quit and protect everyone from secondhand smoke. Richardson oversees the group’s international program focused on reducing global tobacco consumption in middle- and low-income countries.

Even in the United States, where the group says “enormous progress” has been made, tobacco still kills more than 400,000 Americans every year. The worldwide death toll stands at more than 5 million a year and climbing.

Despite its laudable goals, not surprisingly, the Campaign for Tobacco-Free Kids faces heavyweight opposition. “The tobacco industry is very powerful, very resourceful. Cigarettes are cheap to make. They are introduced in poor countries by the tobacco industry,” Richardson said. “In China cigarettes are given as gifts; other countries use them as a right of passage…. Success for us is a lowered tobacco use, declines in sales.”

As important as tackling policy problems is to them, Richardson and her husband always put the children first. Samad is 18 and a senior at Walt Whitman High School with plans to go this fall to American University, his father’s alma mater. Rihanna, 7, goes to Burning Tree Elementary School, which is “down the street” from their family home in Bethesda, Md., Richardson noted.

“We decided to keep our old home and live there so the children could stay in their schools. We use the official residence in Potomac for entertaining,” she said.

“We are respectful of our private life,” she added. “We relax on the weekend — shuttle the kids back and forth to their different activities like violin lessons. I don’t have a car and driver. I am the kids’ driver!

“We are not an active sports family, except the kids go swimming and ice skating,” she continued. “We love to go to the movies or theater as a family and out to a local restaurant.”

Life wasn’t always like this. After graduating from Yale Law School, Richardson chose to live in New York because she called it a “good place for a single woman,” saying she “loved life in New York. I had a lot of friends.”

Now that she lives here with a family, she said she realizes that “Washington is much more livable. It’s small enough you can really know people. It’s clean, pretty, easy and hassle-free. Washington is a company town; New York isn’t like that. Washington is all about the proximity to power — how much power you have and how much access you have to power. New York is about money — how much money you have.”