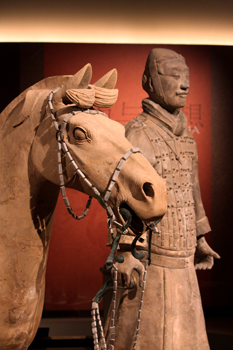 One of the most hyped art-anthropological events of the season — “Terra Cotta Warriors: Guardians of China’s First Emperor” at the National Geographic Museum in Washington — is drawing record crowds (more than 70,000 tickets alone were sold in advance of the museum’s first-ever ticketed exhibition).

Maybe by the time you read this, the throngs will have subsided enough to actually provide enough space for visitors to take in the exhibition at their leisure.

When I visited two weeks after the show’s opening, the space felt more like a shopping mall on the day after Thanksgiving than a relaxing museum experience. But when I was able to jostle into position to view the spectacular anthropological finds and read the reams of wall text that accompany them, I felt intellectually — if not emotionally or viscerally — enriched by the experience.

In case you haven’t heard, “Terra Cotta Warriors” showcases 15 terra cotta figures from the tomb of China’s First Emperor, Qin Shihuangdi, who ruled from 221 B.C. to 210 B.C., during which time he unified the country by conquering the vast warring territories surrounding his Qin state. The display — which features 100 sets of artifacts in all — marks the largest number of terra cotta figures ever to travel to the United States for a single exhibition.

“Terra Cotta” guides you through priceless Chinese artifacts that were buried for more than 2,000 years before a group of farmers digging a well near the Chinese city of Xi’an in 1974 stumbled onto what would become one of the greatest archaeological finds of the 20th century. When archaeologists began excavating the area, they uncovered a subterranean vault containing fragments of thousands of terra cotta figures in four pits.

Since then, archaeologists have excavated more than 1,000 life-size figures, and about 6,000 more are estimated to remain in the known underground pits. The warriors were constructed and buried as a way to protect Shihuangdi in the afterlife.

The life-size warriors in the National Geographic exhibition include two infantrymen, a chariot driver, two officers, an armored warrior, two archers and a cavalryman, as well as two musicians, a strongman, a court official, a stable attendant and a horse. One of the more compelling facts about the warriors is that it took thousands of Chinese laborers, working in assembly-line fashion, 36 years to complete them all. An intricate model depicts these laborers on the assembly line, providing a good perspective on the sheer amount of work involved in creating the sprawling army.

The warriors themselves don’t strike one as exceptional sculpture — compared, say, to the phenomenal “Desiderio da Settignano” exhibition of Renaissance sculpture that the National Gallery did couple of years back — but they are impressive for their lifelike features and diversity. No two faces are alike — quite a feat given the size of the original 7,000-figure arsenal — and the attention to detail is striking. 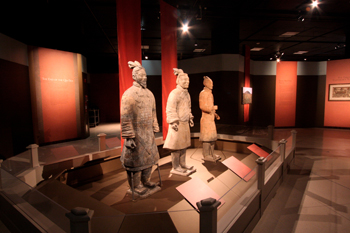 Equally impressive are some of the artifacts that accompany them. Weapon blades, early coins, jade ornaments, roof tiles and decorative bricks, and a bronze crane and swan are also included in the exhibition. In particular, two replica bronze chariots give visitors a sense of the scale of ancient Chinese warfare.

The exhibition is expertly organized across a sprawling gallery space, organized into four themes.

“Building the Empire” introduces visitors to Qin Shihuangdi with information on his establishment of new standards, including dictated script, coinage, weights and measures.

“Power and Paranoia” illustrates the ruler’s obsession with both through immense physical structures. For instance, the emperor had 300 extravagant palaces and 400 lodges constructed, allowing him to stay in a different place each night.

“The Afterlife” depicts construction of the massive underground tomb complex and the practice of burying objects with the dead to serve their spirits in the afterworld.

Finally, “Armies Unearthed” showcases eight of the warriors and details how the terra cotta army was created. It also gives us a glimpse into the work of those who excavated the site and the conservators responsible for reconstructing and preserving these historic relics. Kids especially will appreciate the life-size replica of a terra cotta warrior that is available to touch. Running a finger across the studded, stony armor gives one a tactile sense of an ancient time.

Still, as sheer art, “Terra Cotta Warriors” doesn’t quite beat the other treasures in town. But as anthropology and a sense of ancient history, it’s worth fighting the crowds to catch a glimpse of an army like no other — in this life and the next.