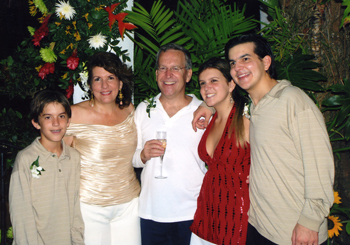 It’s as if they were made for this job — and this city. Recently appointed Panamanian Ambassador Jaime Aleman and his wife Pilar Arosemena de Aleman have wasted no time getting back in touch with their old American friends while making new ones — using their firsthand knowledge of both countries to promote U.S.-Panama relations.

“Pilar and I love being back in Washington,” said Jaime Aleman, a graduate of Washington’s Georgetown Prep who went onto the University of Notre Dame for his bachelor’s degree and then Duke University for his law degree. Jaime recently stepped down as managing partner of his own successful law firm — Aleman, Cordero Galindo & Lee — to accept President Ricardo Martinelli’s invitation this past summer to represent Panama in Washington.

Panamanian Ambassador Jaime Aleman and his wife Pilar Arosemena de Aleman are flanked by their three children: from left, Juan Manuel, a ninth-grader at Georgetown Prep in Washington; 22-year-old Ana Sofía, a Princeton University senior specializing in anthropology and Mandarin; and 24-year-old Jaime Eduardo, a graduate of the University of Virginia who works as a social worker in Panama.

“I wouldn’t have gone anywhere else, only Washington,” said Jaime, who is also the son of a former Panamanian ambassador to Washington, Roberto Aleman. “This is the only posting I wanted,” he said. “Here I am in the house where I grew up, sitting in my father’s office, with my own son attending my old school, Georgetown Prep. That’s wonderful!”

Jaime Aleman was only 11 when he first moved to Washington with his father and mother, returning to Panama for a bit before coming back to Washington when his father was named the ambassador. He then spent most of his teenage and college years in the United States, before taking his first job in 1978 as a young lawyer with the Inter-American Development Bank in Washington.

Pilar also grew up in the United States, first attending the prestigious Shipley School in Philadelphia and then Smith College in Massachusetts — along with Jaime’s sister.

Jaime and Pilar actually knew each other as teenagers. When they were both in Panama on school holidays, they used to date but eventually broke it off. Later, they found each other again in Washington while he was working as a lawyer and she, five years younger, came to job-hunt in the nation’s capital during her senior year at Smith College.

They began dating again and one day, when they were both poolside in Panama with friends, he asked her to marry him. “My father was very strict and even though he loved Jaime, he was a bit upset because he wanted me to have a career and be an independent woman before I married,” Pilar recalled. “He thought I was much too young. Jaime was 26 and I was only 21. But we got married anyway.”

Fortunately marriage didn’t seem to hinder the ambitions of this smart, beautiful woman, who has already led several impressive professional careers. Pilar began working with Citibank in Panama and within a decade became corporate bank head of Banco del Istmo S.A., once the largest private bank in Central America. Then she taught as a finance professor at the School of Business Administration for Universidad Católica Santa Maria la Antigua, Panama’s only Catholic University. In addition, she was president of the Board of Directors of the Panamanian Stock Exchange and president of the National Association of Stock Brokers of Panama. Pilar is also a proud member of the Chairman’s International Advisory Council for the Americas Society, an organization founded by American philanthropist David Rockefeller.

All the while, she has raised three children: 24-year-old Jaime Eduardo, a graduate of the University of Virginia and now a social worker in Panama; 22-year-old Ana Sofía, a Princeton University senior specializing in anthropology and Mandarin; and Juan Manuel, a ninth-grader at Georgetown Prep and the one most interested in following in the diplomatic footsteps of his grandfather and father.

Several careers, 30 years of marriage and three children later, these two high-achieving Panamanians are back in Washington and loving every moment. Although they have each enjoyed individual professional successes, their lives are so intricately interwoven that it seems impossible to profile one without the other.

Together and separately, Jaime and Pilar are great spokespersons for Panama. They say they will push to get Panama’s free trade agreement with the United States finally authorized by Congress, while also working to change America’s outdated perceptions of Panama.

“We are not just the Panama Canal,” said Pilar. “Our country is entering the 21st century on its own, finding its own way. In the past, as Panamanians, we have not been the owner of our own destiny but now that we have the canal back, it’s like we are discovering ourselves as a nation and getting to know who we are.”

Many well-placed Washingtonians are delighted to welcome Jaime and Pilar back to town, including longtime friend Lizette Corro, chief executive officer of Linder & Associates Inc.

“I am thrilled to have them here representing Panama,” said Lizette, a dual U.S. and Panamanian citizen. “When Jaime’s father was ambassador, my father was the embassy’s minister counselor and our families have known each other for generations. I first met Pilar when she was a graduate student at American University. Pilar has a great passion and strong commitment to the education of our Panamanian youth and is determined to enhance Panama’s image worldwide.”

To that end, Pilar’s latest endeavor is both a serious business venture and a one-of-a-kind showcase of Panama.

“Since July 2001, I have been involved in Fundación Amador, the nonprofit organization behind Panama’s Bio Museum — the first museum ever designed in Latin America by celebrated American architect Frank Gehry,” Pilar proudly explained. “It is to be finished in 2011 and will be the very first multicolored museum that Gehry has ever designed. The museum building itself will be a work of art.”

Nicknamed the “Tropical Firebird” by Gehry, this building is sure to garner big headlines in the international art world. According to Pilar, the total cost of the project is around million, with a portion of million coming from private investors. The government hopes to recoup much of the expenses in five years from tourism and other businesses generated by the Bio Museum.

“Our Bio Museum will explore the major consequences in the evolution of mankind,” Pilar explained. “It will expand on all the new scientific findings by the Smithsonian Institution that explore how everything changed when North and South America, once completely separate from each other, became connected by the land that was created from volcanoes — which became what we know as Central America — and finally, how the emergence of the isthmus of Panama made the big difference. 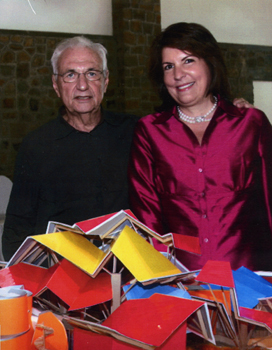 Pilar Arosemena de Aleman, right, stands with architect Frank Gehry in front of a model of Panama’s Bio Museum, a project Pilar has been working on since 2001 that will become the first museum in Latin America designed by the celebrated American architect.

“With the creation of this land which is now Panama, the oceans were divided, the currents changed, the Gulf Stream was created — warming up Europe and making it a habitable continent — and the flora and fauna was totally affected as was the development of human life in Africa,” she added. “Panama is itself a museum,” Pilar continued. “And I am so proud that soon everyone will know it because of our Bio Museum.”

Pilar is clearly very well versed when it comes to her homeland. “We are a country of people from many different origins and therefore we are a very tolerant society,” she explained, offering a brief history lesson: “First we had the indigenous Indians, then the Spaniards conquered us and we were under Spanish influence until 1821, when we became part of Colombia. Chinese and East Indian workers built our railroad and canal and many stayed. Not until 1903 did we achieve independence. Next, the French came and tried to build a canal but it was the American Corps of Army Engineers who finally succeeded and built the canal and kept it running. In 1999, everything was given back to us.”

Today, with Panama’s desirable location, stable democracy and high standard of living, many older Americans and Europeans are choosing to retire on this strategically important land bridge. The ambassador noted that Panama has the third highest per-capita income in all of Latin America.

Although the Jaime and Pilar have done very well for themselves (Jaime founded and sold a bank and the family brewery), both have their feet firmly planted on the ground. As one of their many friends said, “Pilar and Jaime are the real thing — real friends who are always there for you.”

They love to travel (Jaime boasts about having visited 101 countries), entertain and spend time with their families and friends from around the world. A fan of American sports, Jaime fondly remembers attending ballgames for the old Senators baseball team with his father; he’s also been a Redskins football fan since he was a boy here, and he tries to never miss watching a Duke University basketball game on his big-screen TV in the residence’s sunroom.

Looking back at their lives, the ambassador laughs at how he and Pilar grew up only 400 yards away from each other in their respective families’ homes; their two fathers, both successful lawyers, were also gallant competitors.

As he tells the story of how his father died just one month to the day that he and Pilar arrived here, Jaime tempers his sadness with pride. “Before he died, my father knew I was returning to Washington to live in this residence and be Panama’s ambassador here. That made him so happy.”

As for his indefatigable wife, he can’t imagine being here without her. “Pilar is wonderful,” he beamed. “She has this incredible capacity to reinvent herself: She was head of a corporate bank, chair of the stock exchange, a university professor and now, leader in the construction of a major museum. In addition, she is a wonderful, supportive and understanding wife and a great mother.”