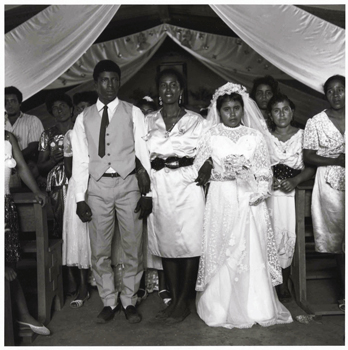 Without reading the accompanying labels, most exhibit-goers would think the old photos depict plantation workers in the southern United States. Then they look at the context and realize the people in the pictures are not African Americans but Mexicans whose families have lived in Mexico for 300 years.

“I love when that happens because people at that point have this moment of realization,” said Cesáreo Moreno, co-curator of an exhibit titled “The African Presence in México: From Yanga to the Present,” on display at the Smithsonian’s Anacostia Community Museum.

The realization he’s referring to is the fact that Mexico’s culture is rife with overlooked African influences.

In 2006, Moreno, who works out of the National Museum of Mexican Art in Chicago, helped to create this traveling exhibition, which is the most comprehensive of its kind to showcase the history, artistic expressions and practices of Afro-Mexicans.

“We really wanted to do something that highlights and focuses on what we call the missing chapter in Mexican history,” he said.

The chapter is long, dating back 500 years.

“Really the stories begin the very first time Hernán Cortés set foot on Mexican soil, which would have been 1519,” Moreno said of the man who took down the Aztecs and paved the way for Spanish colonization of the Americas. “When he comes from the Caribbean islands to the mainland, in search of gold and riches, of course along with him on his ship are African conquistadores, and that’s sort of the beginning of the story that a lot of people don’t realize.”

Although most present-day Mexicans point to Veracruz and Costa Chica as the country’s main areas of African influence, that is a huge misconception, according to Moreno, who says the African footprint is everywhere. “Africans were the ones who mined the silver mines, who worked the haciendas, who helped build and pave the cities, who worked the farms and the sugarcane industry. Really if you look at all those industries, you’re looking at the entire nation of Mexico.”

Yet over the centuries, the African identity seemed to disappear into that nation, swallowed in part by the intermingling of races that led to colonial-era designations such as mulatto (half Spanish, half African), and later folded into one large nationalistic identity that marginalized the country’s African roots.

So for years, Mexican culture was described and divided in terms of its indigenous or Spanish roots, while the “third root” — its African descent — was overlooked until fairly recently.

To fill such a large gap in history, the exhibit uses a variety of media, including paintings, sculptures, photographs, lithographs, woodcuts and even movie posters. (The oldest items include 18th-century lithographs and 19th-century photographs, while the newest are paintings and sculptures produced as recently as a few years ago.) 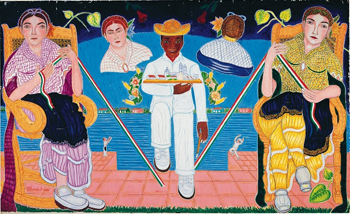 Interspersed among the relics are the stories of influential figures in Mexico’s African history, such as Yanga, an African leader and founder of the first free African township in the Americas (Jan. 6, 1609). “Oftentimes if you cannot put a face on history, people don’t always really understand it as well,” Moreno said.

His goal in selecting the 100 items to represent this “face” was to choose pieces that left no shadow of a doubt of Mexico’s African presence. Consequently, the photographs tend to be the most mesmerizing — and of those, “Portrait of a Female Soldier from Michoacán,” a shot that Agustín V. Casasola captured in 1910 during the Mexican Revolution, could be most telling. “That piece I think is striking,” Moreno said, “because when you look at that face of that woman, there is no doubt in anybody’s mind that she comes from African heritage.”

“The Marriage of Maurillio and Teresa, Corrallero, Oaxaca,” a photo taken in 1990 by Tony Gleaton, is more recent evidence of the intermingling of the two cultures. In it, the groom is clearly of African descent while the bride has more indigenous Spanish features.

At the same time, images such as Gleaton’s raise important questions about these “features,” forcing viewers to ponder the differences between light-skinned versus dark-skinned in defining what it means to be Afro-Mexican. And in a world of racial and cultural assimilation, these questions inevitably touch on the uncomfortable issue of color and how black is black.

The show also begs another important question: How? How could such a rich part of history disappear?

The answer is manifold, Moreno said, but he points to two main events as catalysts. The first came in 1821, when Mexico won its independence from Spain. “During Spanish reign, the Spanish had this caste system that segregated and labeled and identified people according to their skin color,” he said. “When the Mexican independence movement begins, that’s one of the first things they want to do away with. In other words, ‘We’re no longer a nation of different ethnic groups or cultural groups. We are one nation. We are all Mexicans.’”

As a result, “everything that was seen as coming from Africa or anything seen as African or black at that point becomes Mexican and so all those Afro-centric aspects of the culture are assimilated into mainstream Mexico and begin to disappear,” he explained.

The second event happened a century later, after the Mexican Revolution, when Education Minister José Vasconcelos declared all Mexicans to be mestizo, or a mixture of Spanish and indigenous legacy, also known as the first and second roots. “At that point, the third root, as [the African ancestry] is known in Mexico, is completely omitted from Mexican history,” Moreno said. “There were more Africans or people of African ancestry than there were Spanish in Mexico, yet everybody thinks they’re Spanish and indigenous.”

This enlightening exhibit though is sure to have people rethinking those preconceptions — and perhaps reopening the books on a lost chapter in Mexico’s history.