Home The Washington Diplomat April 2011 Bullies, Violence Make ‘In a Better World’ Not so Much Better 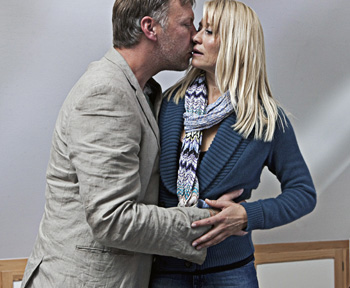 Mikael Persbrandt, left, and Trine Dyrholm star as an estranged couple trying to help their eldest son who’s being bullied at school in Susanne Bier’s Oscar-winning “In a Better World.”

“In a Better World,” the latest from internationally acclaimed Danish director Susanne Bier (“Things We Lost in the Fire,” “After the Wedding,” “Brothers”), garnered both the Academy Award and Golden Globe for Best Foreign Language Film. “Hævnen,” the Danish title, means “revenge,” which better signposts the elegantly written, somber script about spiraling violence in society and absentee fathers by Anders Thomas Jensen (Bier’s regular collaborator). Meanwhile, Bier’s director of photography Morten Søborg strikingly captures bright African landscapes, which contrasts with the more dull if idyllic Danish scenery in the film.

Anton (Mikael Persbrandt), a physician serving in an African refugee camp, tends to patients suffering from the routine horrors of war like starvation and amputated limbs. The scale of atrocity dramatically rises when pregnant women begin to appear with their bellies cut open, the depraved result of a sadistic warlord who placed wagers on the sex of the unborn children. Then one day, the evil monster himself ends up as a patient in Anton’s clinic. The good doctor naturally wrestles with his Hippocratic Oath, for better or for worse.

Anton returns home to his quiet Danish town at the request of his former wife, Marianne (Trine Dyrholm), who’s worried that their older son Elias (Markus Rygaard) is being endlessly bullied in class. Elias’s life noticeably improves though with the arrival of Christian (William Jøhnk Nielsen), a new classmate from London whose father Claus (Ulrich Thomsen) frequently returns on business. Having recently lost his mother to cancer, for which he blames his father, Christian takes no prisoners and fights back viciously against the bullies, taking revenge on Elias’s behalf.

But when pacifist Anton takes the boys on a daytrip, he breaks up a fight between his younger son and another boy, whose father (Kim Bodnia) then punches Anton for laying hands on his son. Anton loses the boys’ respect for not hitting back. He nonviolent philosophical explanation also doesn’t hold any water with the boys. Rather, Christian and Elias take matters into their own hands, with tragic results. 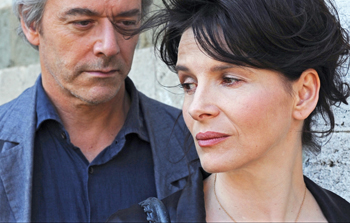 Legendary Iranian master Abbas Kiarostami (“Taste of Cherry,” “The Wind Will Carry Us”) is world-renowned for his thoughtfully crafted documentary-like features in which reality and fiction tightly intertwine to the point where the two cannot be separated. With “Certified Copy,” he ventures to Italy to make his first feature film set outside of Iran. Perhaps Italy provides a refreshing change to the auteur, since the film is far more playful than his previous work.

Esteemed French actress Juliette Binoche (“Summer Hours,” “The English Patient,” “The Unbearable Lightness of Being”) deservedly won the Best Actress award at Cannes for playing an unnamed single mother who works as an antiquities gallery owner in a Tuscan village. As always, Binoche is a delight to watch, a yummy feast for the eyes. Her slightest movements can effortlessly express a potpourri of emotions. Similarly, she breezily switches between English, French and Italian.

She sits in on a lecture by English art historian and author James Miller (opera star William Shimell) covering original and fraudulent art. Noticeably holding considerable attraction for him, she awkwardly invites him to check out her shop. He makes a brief appearance before brusquely stating that he prefers to drive through the countryside before his train departs. She joins him on the road trip, setting up the trademark Kiarostami scene of talking in a vehicle in motion. While driving, they argue over his theories, which infuriate her. Yet that doesn’t stop her from blatantly hitting on him.

Due to a miscommunication that she amplifies, people confuse him for her husband, which they don’t deny. In fact, they play along as if they were a married couple of many years. As they chat about art, life and love, something shifts, at which time it’s clear that they do indeed know each other very well. Now how did that just happen? With a Kiarostami enigma, there are no easy answers, but the pleasure is in pondering the puzzle. 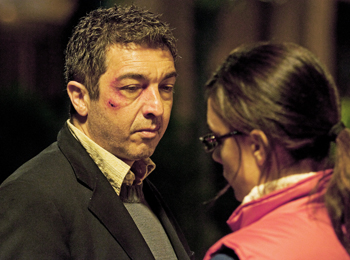 In Argentina, traffic accidents are the leading cause of death, killing more than 8,000 people annually. In response to the road carnage, a ghoulish industry has sprung up in which doctors and attorneys make a living from the medical and legal expenses that accumulate afterward. Despite being disbarred, Sosa (Darín) still hustles as a low-life ambulance chaser who’s called a “carancho,” or vulture. He literally trails sirens to be the first to sign up victims in the hospital before his competitors get there. The victims themselves barely get a fraction of any insurance, with Sosa getting a bigger share and the bulk going to The Foundation, his sleazy employers.

His work brings him time and again into the presence of beautiful thirty-something Luján (Gusman), herself hustling to eke out a living juggling multiple shifts as a new physician recently moved to the big city. When Luján tries to save an accident victim, Sosa is often lurking around trying to snare a new client. The unlikely couple start a tender romance threatened by the violent undercurrents of Sosa’s past catching up to him, forcing him to do rather unpleasant wrongdoings. And Luján’s sleeplessness and drug addiction don’t mix too well with emergency life-saving surgery. Can they ever escape the muck surrounding them as well as their own misdeeds? Don’t count on it.


The Ninth Annual National Cherry Blossom Festival Anime Marathon on April 2 kicks off with Hayao Miyazaki’s “Kiki’s Delivery Service” (2 p.m.) and runs throughout the day. The Korean Film Festival DC 2011 (April 8-May 22) starts with a bang: Jang Hun’s “Secret Reunion” (April 8, 7 p.m.), which stars Song Kang-ho (“The Host,” “The Good, The Bad, the Weird”) in a melodramatic comedy espionage caper.


“A Season of Rohmer” (April 3-May 29) showcases comedies of manner by Eric Rohmer (1920-2010), the verbose French filmmaker often compared to Henry James, Jane Austen and Stendhal. He was a founding member of the French Nouvelle Vague, but he clearly differed from all the rest. According to film critic Roger Ebert, “A Rohmer film is a flavor that, once tasted, cannot be mistaken.” The series starts with 1959’s “The Sign of Leo,” Rohmer’s first Nouvelle Vague feature, after which the complete retrospective of all his existing work unwinds at the National Gallery, the American Film Institute Silver Theatre and La Maison Française.