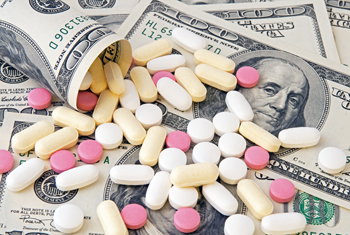 In January, an injectable form of the drug progesterone, a synthetic hormone used to prevent preterm labor in some 130,000 pregnant women every year, cost as little as $10 from your local pharmacy.

Drug companies often claim that the high prices of medications are necessary to compensate for the enormous cost of bringing a drug to market, but that doesn’t explain why older drugs, whose prices should have already been calculated to cover those costs, soar in price when a new drug enters the market.

Just three months later, the same drug skyrocketed to $1,500 per dose — although after a public outcry, the price tag dropped to $690 per dose. That’s still a 69-fold price increase. Why? Did the drug magically get better? Did manufacturers discover a brand new indication? Nope.

The Food and Drug Administration granted exclusive approval to KV Pharmaceutical to produce the drug under the brand name Makena, designating it an “orphan drug” with seven years of monopoly protection. The agency decided that because the drug is a sterile injectable drug, granting specific approval to a manufacturer under FDA guidelines would offer a greater assurance of safety.

Originally, KV planned to charge $1,500 per dose for the drug — which, if injected every week for the recommended 20 weeks, would have cost a whopping $30,000 per at-risk pregnancy. But after an uproar, the St. Louis-based company brought the price down to what it apparently thinks is a much more reasonable $690. It also noted that it will expand its financial aid program so that 85 percent of women who need the drug will pay no more than $15 per dose, according to a company statement.

“This stuff is really cheap to make — this would be as if a brand new company somehow got a patent on Tylenol or aspirin and decided to sell it at $100 a pill,” Dr. Christopher Harman, director of the Center for Advanced Fetal Care and chief of obstetrics and gynecology at the University of Maryland Medical Center in Baltimore, told Internal Medicine News. He found the price hike a particular outrage because the women at highest risk of premature birth — young African American women — may be the least able to afford it.

The FDA has said that companies who were making the progesterone injections previously can still market their drugs as a generic, contradicting a letter sent by KV to compounding pharmacies telling them that the FDA would enforce their exclusive right to make the drug.

Progesterone injections are far from the first drug to take a sudden and startling trajectory upward in price. Last fall, Novartis introduced a drug called fingolimod (Gilenya), the first oral medication for multiple sclerosis. The sticker price on this medication was startling enough: $48,000 a year, far more than some people’s annual salaries.

But this was the first drug of its kind, with no direct competitors. Maybe the premium wasn’t all that surprising — until other multiple sclerosis drugs, many long on the market, suddenly joined the band wagon and started going up in price as well. Copaxone, manufactured by Teva, now costs more than $42,000 per year, nearly 40 percent more than its price at the beginning of 2010. Another company, Biogen Idec, has also raised prices for two other MS drugs, Tysabri and Avonex, though not as much as the Copaxone hike.

Drug companies often claim that the high prices of medications are necessary to compensate for the enormous cost of bringing a drug to market (estimated at around $1 billion over about nine years). But why should older drugs, whose prices should have already been calculated to cover those costs, go up in price when a new drug enters the market?

Dr. Edward Fox, clinical associate professor of neurology at the University of Texas Medical Branch and director of the MS Clinic of Central Texas, thinks it’s all about painting a competitive picture. “With the onset of new medications that come at a premium, companies have raised the price of older medications in order not to appear inferior to the new drug. They look at the price as being meaningful when it comes to expectations. If a certain drug is priced lowest, it must be less worthy somehow.”

Given the high cost of medications for multiple sclerosis and drugs for conditions like cancer, it’s almost impossible to get them without either having excellent insurance, or being in such dire financial straits that you qualify for a drug company’s “compassionate access” program.

But as prices leap ever higher, even “good” insurance and assistance programs are leaving many people behind. Insurance plans are raising co-pays to compensate for the new sky-high drug costs. “On a weekly basis, I’m dealing with patients who have what I would call a medication crisis,” Fox said. “Many of my patients have co-pays of between $300 and $800 a month. There aren’t too many families who can easily absorb that cost.”

And with prices increasing at exponential rates, the income thresholds set by drug manufacturers to enter their compassionate access programs will also need to be higher and higher to assist the growing number of people who are greatly burdened by the cost of their medications.

What’s the answer? Many physicians who are watching their patients struggle to afford their medications — and spending too much of their time appealing insurance company denials of ever-more expensive drug coverage — say that the government needs to step in. “I’ve always felt that when a medication is approved and a price is set, it should be set across the board,” said Fox. “I’m a free-market supporter, but I do not believe in differential pricing of medications for different health care plans. If it’s got a price, it should be the same for Medicare, Blue Cross, Tricare, whatever. If you do that, and it’s truly transparent pricing, companies are more likely to compete with one another in terms of reasonable pricing.”

In return, Fox says, drug companies should be given a longer effective patent life for their medications (at least, the ones they actually developed themselves). Currently, the patent life for a new drug is 20 years — but that begins on the date of the patent application. Drugs are usually patented before the FDA approval process, which can take many years. As a result, the effective life of the patent is often less than 10 years. “The patent clock shouldn’t start ticking until approval,” Fox suggested. “If drug manufacturers had a longer and more predictable patent life, they’d better be able to predict profitability for a certain drug, and might be willing to accept price controls.”

But something has to be done, and soon, Fox said. “We’ve reached a boiling point. My patients are afraid that they won’t be able to get the medications that have made a huge difference in their lives.”