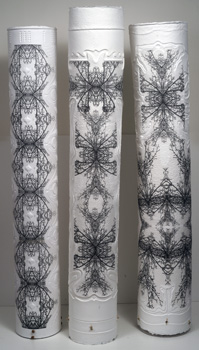 When it comes to Canada, people sometimes view the country in monolithic, benign, cliché terms. For Americans especially, their neighbors to the north often seem like quieter, perhaps somewhat friendlier, slightly more foreign versions of themselves. In terms of culture, the most familiar thing about Canada is that occasionally some of its singers become famous American pop stars.

What Americans, and perhaps the world, tend to overlook is the great diversity found in Canada — in its geography, cities, peoples, and its art and culture. Canadians may not be a particularly noisy bunch; they’re certainly not pugnacious in proclaiming their achievements, although hockey players may beg to differ. But sometimes noise is just noise, or a whole lot of nonsense, something Canadians seem to have no need for.

Yet there’s also a quietude that bears refuting. To be sure, Canadians have their serene vast spaces and natural beauty, but they also have their eccentric politicians and — yes — disagreements like any other society.

Dispelling stereotypes has become something of a specialty at the Inter-American Development Bank (IDB) Cultural Center in Washington. Each year, when the IDB Board of Governor’s holds its annual meeting in a particular city, the center mounts an exhibition representative of the host city or country’s cultural glories and characteristics. The 52nd annual meeting was held last month in the city of Calgary in the province of Alberta, Canada — hence the current show “Canadian Impressions.”

Once again, when you think of the Inter-American Development Bank, Canada doesn’t instantaneously come to mind over South American countries. But Canada is a big part of the Americas — as is its art — and the IDB Cultural Center goes outside its usual southern hemisphere soul to capture that northern spirit in fine style.

And once again, the center succeeds in capturing talent that flies under our artistic radar — rising with glimmering variety to the task of dispelling Canadian clichés and offering a true picture of its complex reality.

“Canadian Impressions” centers on 12 printmakers from different regions of the country — ranging from Quebec to Saskatchewan to Ontario to Vancouver — none of whom fit into the ideas we cherish about Canadians.

And very little among the contemporary artwork is readily identifiable as being “about” Canada. Rather, it seems to be about change — and the need to slow down in order to really comprehend that change.

The 12 artists, selected from an open call issued widely throughout Canada, as evidenced by their geographical variety, all reflect on a society in flux, mirroring the economic and technological changes spreading throughout the world.

According to curator Félix Ángel, we see in the artists’ individual response to this change, to what has amounted to an overflow of information. But instead of embracing the deluge, many of the artists slow it down — compiling visual diaries, documenting memory, resurrecting photographic studies from the 1990s, drawing on history or artifacts in museum collections, musing about the uncertainty of change, and adopting traditional, time-intensive artistic processes in a rebuke to today’s digital corner cutting.

Change is good, but so is simply being able to absorb that change — quality over quickness. These artists maintain a very modern sensibility using modern techniques, but they take their time as well. Technology can make humans carefree but it also makes them careless; this Canadian dozen offers controlled, thoughtful — yet still innovative — responses to age-old questions of religion, migration, politics, human rights and human behavior.

Consider for instance Katie Fife, a young (almost 23) artist from Ontario who tries to connect printmaking and photography to the haunting complexities of memory, its loss, its preservation and its malleable perception. Her translucent “After Image” suggests dust unsettled, weather working on memory, the traces of what happened a minute ago or a century ago.

Tracy Templeton also ponders the past, or the traces that linger as life moves forward. Her “Sliding Behind the Hidden Door” feels like stumbling into a very old, creepy attic, where the remnants of someone’s life sit deserted and left behind.

Vanessa Hall-Patch portrays the whole house and the “security, stability and the reassurance of familiar memories of the past,” she writes in the exhibit catalogue. “Yet homes set adrift in open waters or expansive skies, now groundless, evoke a sense of the unknown.”

René Derouin goes further back, taking his inspiration from ancient themes of the two-headed monster variety that sprout from a mythic past. Michel Gautier takes far more serene-looking photographs of tree branches but stretches and contorts them into a trio of totem poles that look like delicate scrolls from another time. Only these scrolls aren’t meant to extol on the forest’s beauty, but rather warn about the exploitation of that beauty to advance economic development.

All of these artists have looked to the future, but they’re also resurrecting the past to be firmly in the present. And they’re fearless about using printmaking, in both in traditional and off-the-reservation ways, to provide meaning and context before we fearlessly dive into our collective future.

But they’re also careful — perhaps it’s the Canadian in them — careful to step back and appreciate the here and now before it gets swept up by the winds of change.