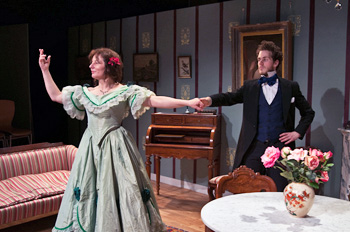 For Hanna Bondarewska, the path to world peace not only exists, she is walking it — one artistic endeavor at a time.

“If we don’t have art, we cannot create anything,” Bondarewska said. “Even Einstein and all the most famous scientists used art as their inspiration to their inventions.”

Her invention is the Ambassador Theater International Cultural Center (ATICC), a nonprofit the Warsaw native founded in 2008 to serve as part professional theater company and part educational epicenter.

“I started this theater to really open up an international cultural dialogue,” Bondarewska said. “This is something that is very close to my heart, and I believe that through cultural understanding and education, you ultimately create peace.”

She has so far partnered with the embassies of Bulgaria, France, Poland and Sweden as well as Alliance Française, the Kosciuszko Foundation and the Cultural Development Corporation. This year she’s adding the embassies of China, Egypt, India and Israel to her list.

“If I am representing cultures, I want to work closely with their cultural attachés and any institutions, theaters, artists from around the world,” she said. Embassies’ roles vary from hosting events to helping with promotion. “We would like to bring more embassies that will eventually create an international theater festival where we bring actors from abroad and have a beautiful festival in Washington, D.C.”

One of ATICC’s early shows was “Hopa Tropa,” a collaboration with the Bulgarian Embassy that recounted Bulgarian folk traditions for children and adults through song, dance and interactive puppetry. Most recently, ATICC worked with the embassies of Belgium and India on “Under the Shadow of Wings,” which consisted of two short mystery plays: “Karna and Kunti” by India’s Rabindranath Tagore and “Death of Tintagiles,” by Maurice Maeterlinck.

“The Ambassador Theater has now twice featured plays by Maurice Maeterlinck, a Belgian who won the Nobel Prize for literature in 1911, whose work is not particularly well known in the United States,” said Andrea Rousseau Murphy, cultural officer at the Belgian Embassy. “The embassy is always pleased when the work of a Belgian literary great receives recognition in the U.S.”

ATICC depends on donations to operate and has a staff of three: Bondarewska, who is artistic director; an associate artistic director and a director of development. She gets advice from her board of directors and an honorary board that resembles a diplomatic hodgepodge of sorts. Members include Anna Niewiadomska, ambassador of Poland to Mexico; former Bulgarian Ambassador Latchezar Petkov; and W_odzimierz Sulgostowski, a Polish consul.

“I was dreaming about this theater for many years,” Bondarewska said. “But I was always scared for many reasons, natural reasons. Also I was brainstorming what kind of theater. There are so many theaters … and then it hit me, because I’ve been working with so many diplomats, so many ambassadors of various cultures. I was thinking, I am a foreigner myself. This is a melting pot. Washington, D.C., is like the capital of the world with all those diplomats and representatives from all the countries, so I said this is it.”

Performances may target audiences of all ages, but the education arm of ATICC embraces kids. In fact, ATICC’s first undertaking was an educational program that Bondarewska put together in 2008 at the request of the Polish Embassy, which was working with D.C. Public Schools on cultural education and outreach, in partnership with the Washington Performing Arts Society’s Embassy Adoption Program. It culminated in a trip to Poland for the students who participated, along with a grand finale show at the embassy performed in front of Poland’s first lady.

Hanna Bondarewska stars with Tyler Herman in “Summer at Nohant” a production by the Ambassador Theater International Cultural Center.

Last year, ATICC launched two two-week summer camps that gave students hands-on experience in all aspects of theater production. This year, Bondarewska is planning three camps for kids as young as 4. One will be devoted to Polish culture and held at the Kosciuszko Foundation on O Street, NW, and the other to Egypt held at the Source Theatre, also in downtown D.C. The third involves a little travel.

“This time we would like to put together American and Polish kids camp in Poland, where they will be working on a little production but also getting to know each other, play together, have fun, and develop some relationships and better understanding of each other’s culture,” Bondarewska said.

Bondarewska herself lives and breathes theater. She has performing arts and directing degrees from Poland and the United States, and even while she is heading ATICC she is still acting. She had a role in “Tintagiles,” which closed Feb. 12, for instance. Her work has been honored with awards such as recognition at the Kennedy Center Performing Arts Festival and has caught the eye of New York-based director David Willinger, who directed “Under the Shadow of Wings.”

“I was just so excited to hear about this theater that’s interested in doing all the international plays — that’s rare these days,” he said. Plus, Bondarewska struck him: “She was something, with an encyclopedic knowledge of world drama.”

Awards and attention are nice, but in the end, it’s the fostering of international relations that Bondarewska cares most about.

“I would like to bring all those cultures together to find that international language,” she said. “We are going forward, technology is going forward, we are bringing each other closer, but if we don’t have that cultural understanding, what joins us? What is different? Then it’s hard to communicate and ultimately create peace.”