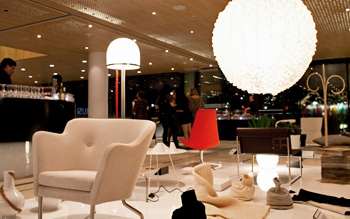 Interested in immersing yourself in Swedish culture but don’t have the time to travel to Scandinavia? Come to think of it, don’t have much time to enjoy anything these days?

Look no further than the House of Sweden’s “Fabric of Life” program, a yearlong multidimensional display of art, design, music and more.

The ambitious series of events and exhibitions, showcased in the gorgeous, glass-encased and minimalist Swedish Embassy near the banks of the Potomac River in Georgetown, explores how modern-day life is enriched through innovation and intelligent design — Swedish style.

The House of Sweden explores the theme “Fabric of Life” with exhibits and discussions looking at how the Swedes use intelligent design to enrich modern-day life, along with its many opportunities, demands, expectations and ever-increasing pace.

But the goal is not just to spotlight the striking designs for which Sweden is renowned, but also to examine all facets of modern life, including its opportunities, demands, expectations and ever-increasing pace. And in this capital of frenzy, the Swedish Embassy offers Washingtonians a chance to escape, slow down, admire the little things, reflect on the big things, and even spend some quality time with the entire family.

Recent discussions in March, for instance, examined topics such as “Family Life in a Fast-Paced World,” “Living Life Smarter” and “Attention – Finding Focus in an Age of Distraction.”

One of the visual highlights of the program that’s sure to keep viewers focused is an exhibition of 17 Swedish designers — all female — whose works embody the country’s streamlined, sustainable design aesthetic.

A simple yet elegant glass wine decanter sits atop a small purple ball, which also serves as a lid. The effect is whimsical, but also functional. Nearby, a minimalist coat rack designed by famous Swedish designer Nina Jobs features three prongs of sleek, blonde wood curled into hooks. The piece looks light, almost fragile, but is surprisingly sturdy. Like many of the designers in this exhibition, Jobs lends her talents to Swedish-based IKEA, while others design for H&M clothing store, also born in Sweden.

Perhaps most interestingly, the embassy is offering an unusual artistic haven for harried parents and their children, with two interactive play rooms that also double as fascinating installations.

The first, called “Zero to One,” is a sprawling, white cloth-encased room with large protruding cushions — not exactly chairs and not exactly mats — for reclining or sitting on. The effect is one of total serenity, and that’s the point. Designed with “under-stimulation” in mind, the room aims to allow a parent and his or her infant child to simply be together without external stimulation. The only thing the parent and child can do in this environment of “spatial stillness” is be together and get to know each other. As they leave the room, parents are encouraged to write a letter that their child can open 10 years later. Suggestions include describing what it’s like to be a parent, how much they learned from their child in that time or anything else. The notion of a silent, peaceful place might be appealing to single adults hoping to escape the bustle of Washington life, but alas, you do need a child to enter the room!

An adjacent room, titled “Swedish Seeds,” showcases Swedish designs for children that are remarkable for their safety and functionality. Swedish designers spent years observing the everyday play habits of children. Taking cues from what they saw, they have created groundbreaking designs for life jackets, helmets, baby carriers and carriages, as well as car seats, furniture and toys. In all, this part of the exhibition features 50 design products by 30 different Swedish companies.

Stroll across the hallway and you’ll encounter a series of arresting photographs by Charlotte Gyllenhammar, one of Sweden’s most renowned contemporary artists. Ethereal and dreamlike, the images are part of her acclaimed photographic series titled “Hang” that first premiered at Paris Photo in 2006. Her sculpture “In Waiting” is also included here.

Always active, the embassy will switch gears a bit in April to showcase some of Sweden’s most accomplished musicians as part of a series called “House of Music.” Niklas Sivelöv will perform a piano concerto on April 20, Kristina Winiarski will perform a cello concert on May 9, followed by the annual Nordic Jazz Week in June. Finally, on May 20 to 21, “Music Doc 2011” will invade the House of Sweden’s rooftop. The prominent documentary film festival will screen some of the most exciting music docs to come out of Sweden. As part of that, “Music After Dark” will feature an eclectic mix of live music, film screenings, DJs, videos and more — ample opportunity to slow down and get our own busy houses in order.