Home The Washington Diplomat October 2016 Caveat Elector: Careful Who You Vote For 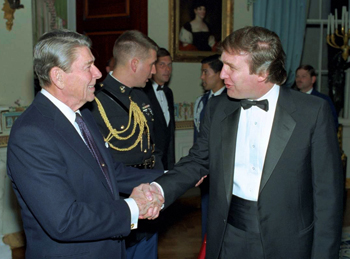 As Nov. 8 approaches, the entire world is waiting to see who U.S. voters will choose to be the leader of the free world, as Americans always like to say. The next resident of the White House could be a woman, assuming Hillary Clinton has fully gotten over her pneumonia and maintains her lead in key swing states, especially after the debates. In theory, that woman could also be Jill Stein, if the environmentalist miraculously pulls off an upset while staying out of jail (a warrant was issued for the Green Party candidate’s arrest after she spray-painted a bulldozer at protests against the construction of a North Dakota pipeline).

Or America could swing in the opposite direction with Donald Trump, a reality TV star with no political experience but an unusual mix of billionaire bombast and populist appeal. Then again, it could go with Libertarian Party candidate Gary Johnson, who openly wondered what Aleppo was during a TV interview.

Besieged Syrian cities and geographical gaffes aside, the odds are that either a woman/former first lady or a real estate mogul/television celebrity will be the country’s next president — a first for America either way. The election would also mark the culmination of an unprecedented, unpredictable, flat-out bizarre campaign that many voters just want to be over. But as much as American politicians like to tout the country’s exceptionalism, when it comes to presidential firsts, the rest of the world has been there, done that — and might have a few lessons for Americans to learn.

The U.S. is long overdue for a woman leader. Sri Lanka elected a woman prime minister, Sirimavo Bandaranaike, in 1960, and in 1974, Isabel Perón of Argentina became the world’s first woman president. Perón was a dancer before she met then-President of Argentina Juan Perón in the mid-1950s and became his personal secretary. The two eventually married while Perón, who was 35 years her senior, was in exile. When they returned to Argentina and Juan Perón ran for president in the early 1970s, Isabel was his running mate. She succeeded her husband in office on his death in 1974. (More recently, Cristina Kirchner served two terms as Argentina’s president, after her husband Néstor stepped aside from his own four-year presidency to support her candidacy in 2007.)

The first democratically elected woman president in the world was Vigdís Finnbogadóttir of Iceland. Finnbogadóttir beat three men when she was first voted into office in 1980. Despite her unconventional political background — she was a French teacher, director of the national theater and an occasional tour guide — she obviously did something right in the eyes of the electorate, who returned her to office three more times until she retired in 1996. Her 16-year presidency is the longest tenure as head of state by any woman anywhere.

We believe Donald Trump is the first reality television star running for the presidency of any country, largely because reality TV hasn’t been around for that long. But there are parallels between reality TV and running for president, not the least of which are the constant cameras documenting your every move, along with your family’s.

There have been many actors who have run for, and some cases won, the race for the White House or similarly high offices. Among the famous faces are:

Ronald Reagan: The star of many a forgettable movie and a few memorable ones, Reagan was twice elected president of the United States, the first time in 1980. Reagan is credited by many conservative Americans with single-handedly bringing down the Berlin Wall and ending the east-west, communist-capitalist divide in Europe, although outside of the U.S., the fall of the wall is generally said to have been brought about by the crowds who converged on it when East German authorities eased travel restrictions. Before going into politics — he was governor of California from 1967 to 1975 — Reagan also worked as a radio announcer. He is the only president of the United States who has been divorced. So far. 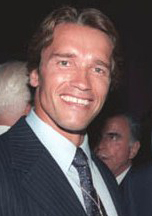 Arnold Schwarzenegger: The Austrian-born body builder turned actor who is known for his roles in the “Terminator” movie series became the “governator” of California in 2003 and was re-elected in 2006. After leaving office in 2011, Schwarzenegger split from his wife Maria Shriver after admitting to her that he had had a son with the family’s housekeeper. Schwarzenegger had berated his fellow Republicans for trying to impeach President (and possible First Gentleman) Bill Clinton in 1998, saying it was a waste of time.

Jesse Ventura: A Navy veteran, pro wrestler and actor, Ventura ran on a third-party ticket in the gubernatorial race in Minnesota in 1999 and won. During the campaign, he declined to take money from special interests and said money in politics had turned the November elections into an auction. He won the governorship on “$50 donations from the people of Minnesota.” Ventura’s candidacy boosted turnout to 60 percent, well above pundits’ predictions. He declined to run for a second term, however, though he said he would’ve won if he had.

Joseph Estrada: Before he became president of the Philippines, Estrada starred in more than 100 movies and produced an additional 75. In many of roles, he defended the poor against a corrupt establishment. The powerful Roman Catholic Church opposed his candidacy for the presidency in 1998 because Estrada had admitted to cheating on his wife and having four children with other women. He beat his rival for the presidency by around 25 points, the biggest margin in a free election in the history of the archipelago nation. But two years after he was elected, Estrada was accused of corruption and stepped down months later after mass protests — a tried and tested way for Filipinos to force presidents from office. In 2007, he was convicted of plundering government funds and sentenced to a maximum of 40 years in prison. His former vice president, Gloria Macapagal Arroyo, who succeeded him in office, pardoned him a month after his conviction. Estrada was elected mayor of Manila in 2013 and re-elected this year.

The Art of Politics

Governing is a fine art. And some politicians have that in spades, with eclectic backgrounds ranging from painting to poetry.

Ivo Josipović: The president of Croatia from 2010 to 2015, Josipović has probably the best training for any head of state: He studied music and law and has taught harmony at the Zagreb Academy of Music, as well as law at the University of Zagreb. He has composed some 50 musical opuses for symphony orchestras, chamber orchestras and soloists, and won numerous Croatian and international artistic awards. Josipović said that when he was elected president, he would use his free time to write an opera about the murder of former Beatle John Lennon, but instead spent much of his time shepherding Croatia into the European Union.

Edi Rama: The current prime minister of Albania came to politics via art and basketball. In a TED talk Rama gave in 2012, he talked about how, during his 11 years as mayor of the Albanian capital, Tirana, he used art — painting the drab communist buildings in bright stripes — as a way of taking back the city for the people.

“It was a form of political action in a context where the city budget I had available after being elected amounted to zero comma something,” said Rama, who in his youth played on the Albanian national basketball team. “When we painted the first building, by splashing a radiant orange on the somber gray of a façade, something unimaginable happened. There was a traffic jam and a crowd of people gathered as if it were the location of some spectacular accident, or the sudden sighting of a visiting pop star.”

The outspoken Rama demolished hundreds of illegal buildings as mayor and, as prime minister, has made fighting crime and corruption among his priorities.

Other Notables: Irish President Michael D. Higgins is a poet. Andry Rajoelina was a disc jockey and successful entrepreneur before he became president of Madagascar in 2009, in the midst of a political crisis. Slovenian President Borut Pahor reportedly worked as a male model to pay his way through college — which is arguably an art form. And former Italian Prime Minister Silvio Berlusconi was a crooner in the Bar Kontiki on the island of Elba — yes, the same island where Napoleon was sent into exile the first time around, only to escape, return to Paris and reclaim the title of emperor until he was defeated in the Battle of Waterloo in 1815.

To Be or Not To Be Well-Read

History, or current affairs for that matter, seems to have eluded some U.S. presidential hopefuls. Libertarian candidate Gary Johnson drew some ridicule when he replied to a TV interviewer, “What is Aleppo?” when asked what he would do, if he were elected, about the Syrian city that has borne the brunt of the country’s fighting.

Besides being the most besieged city in Syria, and the epicenter of the still growing refugee crisis, the ancient city of Aleppo is mentioned in Shakespeare’s “Macbeth.” This is what Witch 1 says in Act 1, Scene 3, referring to a woman who refused to share her chestnuts with the old hag:

But in a sieve I’ll thither sail,

To “do” someone in Shakespearean times was apparently not a good thing.

In an interview in March with Argentina’s Buenos Aires Herald, Columbia University English and comparative literature professor James Shapiro said every leader should read Shakespeare and learn lessons from the Bard, but few do.

“There are really no successful leaders in Shakespeare. He puts them under a magnifying glass and even the best of them, like Henry V, died and left their successor in a mess,” Shapiro said.

Two of the U.S. exceptions, he said, were Presidents Bill Clinton and Abraham Lincoln, who Shapiro called “the greatest president of the U.S, and maybe one of the greatest leaders.” Lincoln “always carried a couple of Shakespeare works with him,” Shapiro noted.

As for more contemporary U.S. leaders, Shapiro said he has not asked President Obama or Hillary Clinton if they are keen readers of Shakespeare’s work. As for Donald Trump, he said, “I don’t think he reads Shakespeare, but I could be wrong because he is doing so well.

“Maybe he has read some of those plays, like Richard III when he rises to the top.”