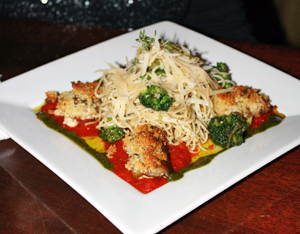 Photos: The Charlotte Hotel and Restaurant

The Charlotte Hotel and Restaurant in the quiet town of Onancock, Va., offers solid, well-balanced dishes without the fried fish monotony of other Eastern Shore eateries. Seafood is of course a highlight, but the menu offers a range of choices, from eggplant braciole, above, to panko-crusted chicken.

Wintertime in Washington, especially after the holiday madness winds down, can be a bleak, even boring time. But that’s all the more reason to venture out of town for a short daytime excursion. Local getaways are not only for the prime spring and summer months — they also make for nice wintry escapes, especially when there’s good food at the end of your destination that offers a welcome change of pace to D.C.’s frenetically ultra-trendy dining scene.

Blink twice though and you may miss the turn off Route 13 that takes you west and back through time to the small former colonial tobacco port of Onancock, Virginia. Located at the southern end of the Delmarva Peninsula, Onancock sits on a small area at the head of Onancock Creek. With easy access to a natural deep-water harbor off the Chesapeake Bay, the town grew quickly after its charter in 1680 as Port Scarburgh, a name that was changed to Onancock to reflect the Native Americans who used to call the area “auwannaku,” or foggy place. Wake up early in the morning and stroll the docks and you will see just how aptly the town is named. Slowly drifting fog softens the silhouettes of the pleasure crafts that have replaced the sailing vessels, barges and riverboats that once plied the waters of the Chesapeake, but the timeless cries of the gulls and salty fresh air bind visitors to Onancock’s long and rich history.

While Onancock did not share the same decline that some other Eastern Shore towns suffered, for many years it was more of a passing-through point for people making their way to the Tangier Island ferry than a destination in its own right. But over the past decade, it has experienced a marked renaissance. Despite having a permanent resident population of under 2,000, Onancock sports several excellent restaurants, hotels, art shops, a bakery, a community stage, movie theater, stunning churches and a historical museum housed in a beautifully preserved 18th-century federal-style mansion.

With its revitalization, Onancock has also attracted an eclectic crowd. A renowned master leather craftsman, a noted botanical artist and a retired glass inventor compete with each other, but as restaurateurs. Meanwhile, chefs play guitars for their guests, and a retired attorney and former spice executive run a gourmet food shop and sponsor dinner and movie nights.

And one of the biggest surprises is that unlike many other larger resort towns on the shore, Onancock offers diners (wanting something other than fried fish) excellent dining options, several in fact. One of the best is the Charlotte Hotel and Restaurant, a slightly funky spot just off the main drag in downtown Onancock.

In 2003, Charlotte Heath and Gary Cochran moved from Pennsylvania to Onancock in search of their next big project after finishing up a long-term farmhouse renovation. They found it when they discovered an empty building for sale and decide to try their hand at inn keeping. The spot, built originally as the White Hotel in 1907, hadn’t been used as lodging since the original hotel closed many years earlier. After months of backbreaking renovation and decoration, much of which they did themselves, the couple opened the Charlotte Hotel with eight guest rooms, two dining rooms, a small bar and plenty of charm. Doubling as a gallery, the walls are covered with artist Heath’s exquisitely rendered botanical illustrations.

As bed and breakfast food is part of the deal, the pair opened a fine dining restaurant that serves dinner and breakfast five days a week. Advocates of the buy local movement, Cochran, Heath and veteran Eastern Shore chef Ted Cathey, who oversees the kitchen, have put together a small but nicely balanced menu featuring products from local watermen, farmers and other area businesses. The menu changes frequently with availability but typically offers meat, fish, fowl and a vegetarian choice. To complement the dishes, the bar offers an extensive international wine list that the team uses to good effect when putting together parings for all of the dishes, including dessert. 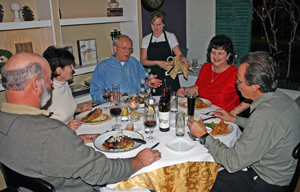 Since you are on the Eastern Shore, it’s naturally tempting to focus on seafood, a temptation that will be amply rewarded. Perfectly fresh local oysters, lightly breaded, pan fried and served with corn cakes and remoulade, double deliciously as an appetizer or entrée. They are perfect in their simplicity and straightforward presentation, pairing delightfully with the fried green tomatoes when they are available.

Keeping in the same robust vein, the pork dishes justify skipping the seafood. On a recent visit, the chargrilled tenderloin was an inspired combination, featuring smoked gouda polenta, spinach, crispy onions and an apricot cider glaze. The steaks are also typically prepared well, though one might find the version of a traditional béarnaise sauce slightly bland.

For a more sophisticated turn, the signature lobster bisque, accented with a nutty Spanish cream sherry, is the perfect partner for the warm goat cheese tart, which arrives garnished with sliced pear and baby spinach. Perfectly seared Atlantic salmon rounds out the meal, whether prepared with a tarragon citrus beurre blanc or an avocado-candied ginger salsa.

Dinner finishes with other crowd-pleasing favorites such as crème brûlée, coconut layer cake, a dense flourless chocolate cake, and an ever-changing array of homemade ice creams that prove Cathey is as adept with the sweets as he is with the savories.

While not everyone thinks of heading to the shore as winter sets in, the moderating effects of the bay and the ocean make for gentler weather that offers an appealing weekend respite from the city cold. Many things do shut down in town for the first few months of the year, though there are still good places to eat and stay, and the quiet adds to the feeling of stumbling on an undiscovered treasure. Come spring, the weather and the action pick up, and the lovely floral Onancock landscape begins to bloom, welcoming the lucky travelers who’ve uncovered this hidden gem just off Route 13.