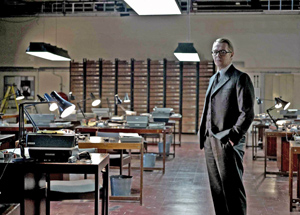 Also See:
‘A Dangerous Method’ and ‘Carnage’ and Repertory Notes

Be warned that the middle-age, über-keen Smiley is no James Bond, Ian Fleming’s famous character who defined the public image of dashing British spies through the long-lasting action movie franchise. In “Tinker Tailor Soldier Spy,” not a whole lot of action takes place, and the little that does happen is sporadic. Sometimes though, less is more. Swedish director Tomas Alfredson’s first English-language film (enabled by the international sensation over “Let the Right One In,” his Swedish sleeper hit) succeeds in translating to the big screen an intelligent vision of le Carré’s world of brainy espionage, brought to life by an all-star British ensemble cast.

At the height of the Cold War in 1973, Control (John Hurt), the chief of the U.K. Secret Intelligence Service (SIS), more colorfully known as the Circus, dispatches loyal agent Jim Prideaux (Mark Strong) to Budapest for a special operation. When it unfortunately disintegrates into a wild disaster, the public fallout forces Control and his inner circle out to pasture into early retirement, including George Smiley.

Undersecretary Oliver Lacon (Simon McBurney), whose ministry oversees the Circus, then finds new evidence confirming Control’s suspicion of a Russian mole at its top echelons, the basis for the failed special mission, a secret Control hid even from Smiley, his right-hand man. Lacon asks Smiley to quietly ferret out the double agent, with help from Peter Guillam (Benedict Cumberbatch), an active young intelligence offer who can roam the halls of the Circus as Smiley’s trustworthy proxy. 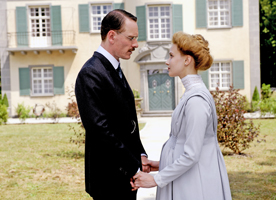 Michael Fassbender, left, plays psychiatrist Carl Jung, who is content with his wife Emma (Sarah Gadon) until a new patient comes into his life in “A Dangerous Method.”

Peculiar Canadian director David Cronenberg’s infamous body of work (“Eastern Promises,” “A History of Violence,” “eXistenZ,” “The Fly”) typically delves deep into macabre territory, earning him the infamous nicknames Baron of Blood and King of Venereal Horror. Yet he isn’t a hack making slasher films for teenagers; he’s a respected art house director well traveled on the international film festival circuit making arty films that are usually difficult and often perverse. So a veteran Cronenberg watcher might expect that his latest film, “A Dangerous Method,” would be full of signature Cronenberg craziness.

After all, writer Christopher Hampton (“Atonement,” “Dangerous Liaisons”) adapted the script from his own play, “The Talking Cure,” based on real events in the interconnected lives of legendary psychiatrists Carl Jung (Michael Fassbender) and Sigmund Freud (Viggo Mortensen), who both made history analyzing and advancing theories in mental illness. A large part of the story depicts written letters between the two doctors — largely based, respectively, in Zürich and Vienna — which are supplemented by meetings in the flesh about their professional opinions.

Perhaps both actors are playing their reserved characters with historical accuracy, but it’s disappointing to watch such flat performances from the likes of Fassbender and Mortensen, who’ve been known to command the screen with their charismatic presences. “A Dangerous Method” might be one of the tamest of Cronenberg’s films, leaving a result that is modestly interesting on an intelligent level, but lacking enough passion to really be inspiring.

Most of the emotion that does appear comes courtesy of Sabina Spielrein (Keira Knightley), a real-life Russian-Jewish patient of Jung. Making her first appearance in the asylum, she’s such a raving lunatic that Knightley’s performance approaches caricature. The startling impression is so jarring that it can lift the viewer — at least this writer — out of the movie’s suspension of disbelief, not the best mindset to begin a historical movie.

After Jung cures her by experimenting with Freud’s then cutting-edge technique of psychoanalysis, Jung writes to Freud, the world’s most famous psychiatrist, about Spielrein’s case. As a fledgling young psychiatrist, Jung is afraid Freud might be indifferent. Though Jung started their relationship somewhat in awe of Freud, Jung eventually disagrees more and more with Freud, particularly about his insistence on defining every mental problem through sex.

Jung freely expresses his philosophical frustration with Freud to Otto Gross (Vincent Cassel), a fellow psychiatrist and patient referred by Freud to Jung. He’s content in a monogamous marriage to Emma Jung (Sarah Gadon), so he is shocked by Gross’s promotion of polyamory as a natural way of life, including practicing public sex acts. Let’s face it, any character played by Cassel must be a little nutty.

As Jung’s professional confidence and reputation grow, the uneven balance of power becomes more level over time. The pair jointly depart for a professional tour of the United States. After boarding the transatlantic cruise ship, Jung abruptly apologizes that he must leave Freud behind on his floor; Jung slyly explains that his wife unfortunately booked him a first-class cabin. As he walks away with a wisp of a smile, Freud stares at his “junior” colleague with a perplexed look, providing one of the film’s few chuckles.

Meanwhile, Spielrein goes to medical school, where she wants to become a psychiatrist as well. She feels her academic studies teach inadequate lessons given her own personal lack of practical experience in love and sex. So she attempts to seduce Jung, who initially rebuffs her. Perhaps inspired by Gross, Jung eventually succumbs to her advances. Their intense affair includes some distantly viewed bondage and whipping scenes that excite them both, but they’re ultimately rather blasé, again, especially for a Cronenberg film.

That’s really about all that I can really recall about the mayhem in and out of the mental institution. If there’s much more excitement that I’m missing, it can’t be very memorable. 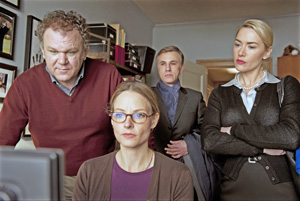 Let’s cut straight to the chase. “Carnage” turns out to be my least favorite film directed by renowned Polish-French director Roman Polanski (“The Ghost Writer,” “The Pianist,” “The Tenant,” “Repulsion”), whose body of work I greatly admire. Polanski’s brilliant film career has been inhibited by his notorious legal issues preventing him from working freely in the United States, where his Hollywood career included “Chinatown” and “Rosemary’s Baby.” Yet his prestige has drawn Hollywood and international stars to Europe for the opportunity to work for him.

At least off the top of my head, “Carnage” also happens to be my least favorite film from any of its four well-regarded stars so celebrated by the Academy Awards. The high-wattage cast features British actress Kate Winslet (Oscar winner for “The Reader;” “Titanic,” “Sense and Sensibility”), Austrian actor Christoph Waltz (Oscar winner for “Inglourious Basterds”), American actress Jodie Foster (Oscar winner for “The Silence of the Lambs,” “The Accused;” nominee for “Taxi Driver”), and American actor John C. Reilly (Oscar nominee for “Chicago”). With this caliber of acting, the performances are not bad and could even be considered good, but I couldn’t stand any of the vile characters in the end!

“Carnage” opens in what appears to be a distant shot of a Brooklyn park, in which one child assaults another with a stick. The attacker’s parents, Nancy Cowan (Winslet) and Alan Cowan (Waltz), visit the luxury apartment of the battered boy, whose injuries include broken teeth, to discuss the matter with his parents, Penelope Longstreet (Foster) and Michael Longstreet (Reilly). The Cowans try to leave several times, but they only make it into the hallway before being sucked back into the apartment for more conversation — and a serving of cobbler, which may not be for the best. The discourse and actions become nastier over time. Everybody becomes upset and hates each other, but nobody can escape the suffocating prison of the apartment.

It’s a shame that viewers also must endure the claustrophobic experience. Such shared suffering could possibly have been intended by the filmmakers, but why put fans through this? I felt dirty, but I couldn’t stop watching in good conscience because I had to assess it. Nonetheless, I did have to hit pause for a recovery break and power nap when I just couldn’t take it any longer.

“Carnage” is classified as a comedy-drama, but I didn’t laugh much. The film is too well crafted to necessarily be described as terrible, but it became completely unappealing as it progressed, delivering diminishing returns. Theoretically, pieces of it could have worked as shorts that are tolerable in small doses. I actually rather enjoyed the building nervous tension of the opening 15 minutes or so.

One might wildly speculate that if Polanski was able to shoot in the United States instead of in Paris, he might have co-written and directed a different adaptation with exterior Brooklyn shots that opened up the scenes, which might have resulted in a less claustrophobic experience for the audience. Then again, he and co-writer Yasmina Reza adapted the screenplay from her own play, “Gods of Carnage,” so maybe they were never going to stray far from the original source.

Perhaps massive rewriting would be in order. I’ve enjoyed multiple viewings of Spanish writer-director Luis Buñuel’s surrealist classic, “The Exterminating Angel,” a similar story in which dinner party guests can never manage to leave the house. So it’s possible to successfully execute a similar concept, albeit one in which the room’s inhabitants may not act quite so nasty to each other as in “Carnage.”

The ever-popular Iranian Film Festival 2012 (Jan. 6-Feb. 19) kicks off with “This is Not a Film” (Jan. 6, 7 p.m.; Jan. 8, 2 p.m.). Secretly shot by co-director Mojtaba Mirtahmasb on an iPhone and smuggled into France on a USB drive hidden in a cake, the last-minute Cannes Film Festival entry looks at the isolated life of leading director Jafar Panahi (“The Circle,” for which The Washington Diplomat interviewed him). After his 2010 arrest, which caused an international outcry of protest, he cannot make films, provide interviews or travel.