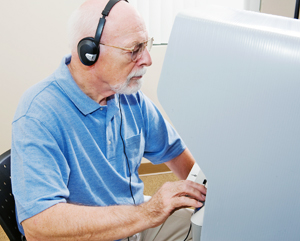 Hearing aids aren’t cheap. If you buy a high-quality hearing aid from an audiologist, by the time all is said and done it will probably run you well over $2,000 — nearly double that if you need aids for both ears.

So what would you say if you could buy hearing aids for a fraction of that — between $650 and $950 — from a company affiliated with a nationally known health insurer, and do it all online, including your hearing test? That’s what Minnesota-based UnitedHealthcare (UHC) is now offering through its business affiliate, hi HealthInnovations. As of October 2011, consumers can go to the company’s website (hihealthinnovations.com), take an online hearing test, and order their hearing aids for less than $950. If they choose to sign up for UHC’s Medicare Advantage plan, the aids might even be free or virtually so.

Minnesota-based UnitedHealthcare is now offering online hearing tests and hearing aids for less than $950, but numerous health groups have spoken out against the new program, arguing that patients need to have their hearing inspected by professionals.

Sounds great, right? There’s just one problem: Virtually every organization involved in hearing health thinks it’s a bad idea. Organizations that have spoken out against the new program include the Academy of Doctors of Audiology, the American Academy of Audiology, the International Hearing Society and several state organizations for speech, language and hearing. Even the Minnesota Department of Health took action, warning consumers in a release that, “Before hearing aids can be sold to consumers, (state and federal) laws require practitioners to … visually inspect the consumer’s ears and ear canal.”

That’s just one of the problems, says Gregory Frazer, owner of California-based Pacific Hearing Inc. and director of audiology at Pacific Eye & Ear Specialists who has written to UHC with a litany of concerns about the new plan.

“First of all, no one is looking in the person’s ear to see if they have earwax,” he pointed out. Earwax? You bet. About one-third of people with hearing loss may just have a massive buildup of wax, called cerumen, in their ears. If you don’t get the wax out, a hearing aid isn’t going to help much.

“People doing a hearing test online also don’t have the benefit of a professional consultation to pick up pathological problems that may be related to the hearing loss,” Frazer added. “Our ear mirrors our health, and between 5 percent and 10 percent of people with hearing loss are going to have a condition that requires some type of medical or surgical treatment.” But if you’re doing an online hearing test, nobody is examining you to see if you have other symptoms that might point to underlying medical problems.

And how accurate is that online hearing test? Not very, say many professionals. Most audiologists will test your hearing in a specially designed sound room, and they will test more than just the “pure tone” thresholds that the hi HealthInnovations test uses. Even though the online program recommends taking the test in a quiet place, many people can’t really create a soundproof environment in their home. (When I tried to take the test, jets from a nearby airport were zooming overhead.) Some people have taken the test twice, both passing and deliberately failing, and in both cases hearing aids were recommended.

There’s also a question as to whether or not the practice is even legal. The International Hearing Society has requested a meeting with the Food and Drug Administration about hi HealthInnovations because the sale of hearing aids is federally regulated. The Medical Devices Act requires that a seller will not sell a hearing aid unless the prospective user has presented a written statement signed by a licensed physician (preferably one who specializes in diseases of the ear) within the last six months. Some companies skirt this requirement by marketing their products as “personal sound amplification devices,” which are not aimed at treating hearing loss. But the Hearing Industries Association (HIA) believes that by utilizing a hearing test — and then presenting consumers with results that suggest specific devices for varying levels of hearing loss — the hi HealthInnovations program steps over the line.

“In our view, this isn’t just an implied claim, but an out-and-out statement that these products are intended to compensate for impaired hearing,” said Carole Rogin, executive director of HIA.

Whether or not the FDA shuts down hi HealthInnovations (we were unable to get a comment from the company), it’s important that people who have hearing problems get accurate and complete care. Obviously, everybody’s dealing with a difficult economy and the lure of a good product at a cheaper price is difficult to resist. But is it really so cheap? It’s unlikely that the hearing aid you bought online is going to be professionally fitted for you, or come with a warranty, or with someone who will teach you how to insert the aid in your ear properly or change the batteries. These things are often more complicated than they sound. Frazer says that a good third of his patients have trouble changing batteries in their hearing aids even with assistance from his office.