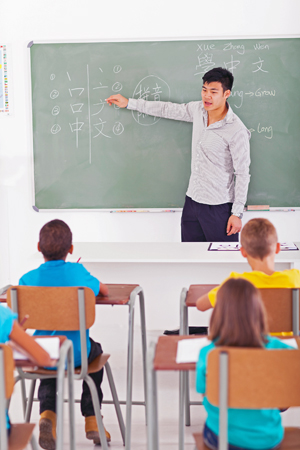 Walk around Washington, D.C., for a while and you could easily overhear conversations in half a dozen languages. Historically, the language offerings at D.C. schools have not reflected the diversity of the city’s population. But that is changing as local schools — public, private and parochial — push the boundaries of traditional high school language education with advanced immersion programs.

These include courses in what the U.S. government considers “critical languages,” such as Arabic, Chinese, Hindi, Japanese, Russian, Turkish and Urdu — marking a shift away from the conventional language classes that taught Spanish and French to legions of American students.

Chinese has been gaining in popularity in D.C. public schools in recent years. Chinese studies are offered at School Without Walls Senior High School, Woodrow Wilson, Phelps Architecture, Construction and Engineering High School, and Roosevelt Senior High School, among others. A small group of D.C. students even traveled to Beijing as part of the DC China Scholars Program.

But with the establishment of Yu Ying, the Chinese language is making its way into the city’s burgeoning charter system — and not only in occasional classes, but throughout the school day.

Yet with only 32 kids in its upper-grade classes, Yu Ying would struggle to field a football team on its own. To deal with the capacity issue, the school teamed up with four other public charter schools: Latin American Montessori Bilingual, DC Bilingual and Mundo Verde, all of which offer Spanish immersion, and Elsie Whitlow Stokes, which offers both French and Spanish immersion, to create DC International (DCI), a public charter middle and high school.

At full capacity, DCI, which will be housed together in one building, would enroll 1,000 to 1,400 students in grades six through 12.

With the creation of DCI, students will be able to continue their bilingual education throughout high school. There are currently no public high schools in the District that offer level-appropriate language education for kids coming from language immersion elementary schools. At the typical public high school, students get 45 minutes of foreign language instruction twice a week, while students in language immersion programs get a full day of interdisciplinary instruction in their target foreign language.

It was a logical collaboration given the schools’ similar curricula and shared mission emphasizing internationalism, sustainability, and social justice. To some extent, though, the member schools had to check their individual identities at the door. Mundo Verde is environmentally focused while Elsie Whitlow Stokes emphasizes community service.

But “good teaching and good curricula have more in common than they do differences,” said Carmen Rioux-Bailey, a Yu Ying parent and DCI’s chief education officer. The whole process went pretty smoothly, despite having quite a few cooks in the kitchen.

It helped that the Public Charter School Board was “immensely helpful and excited about the prospect of this innovation and the collaboration,” Rioux-Bailey said.

DCI will offer language immersion through the International Baccalaureate (IB) framework in all three of the languages taught at its five elementary schools. English and math will be taught in English, while students will learn social studies in their target language. Physical education, fine arts and science will be taught in English or in one of the three target languages — e.g. if the science teacher DCI hires speaks Spanish, the Spanish immersion students will take science in Spanish, while the French and Chinese immersion students will take science in English. Students will also have the opportunity to learn a third language.

It’s not clear what the language of the lunchroom will be. With students segregated by target language for at least part of the day, social groups may divide along linguistic lines as well. The administration is wise to that possibility and is planning to teach basic phrases in all three languages at orientation so that students are at least comfortable with the other languages.

“We really expect our kids to come out bi-literate and bilingual and maybe multi-literate and multilingual,” Rioux-Bailey said. “Their world is not going to be limited to their community, or even this country … they will really have an opportunity to have an impact on the environment, on global social justice and service through their language skills.”

DCI will be overseen by a board that includes representatives from the five member schools. The elementary schools will continue to operate independently in their current locations, but the middle and high school will be managed cooperatively at a single location.

That single school will open its doors next fall in a temporary space (the location will be announced in early 2014) before moving to a permanent site in a multiuse facility at the former Walter Reed Army Medical Center site for the 2015-16 school year. Appropriately, the school’s future neighbor will be the State Department’s new Foreign Missions Center.

Students will experience DCI as a single school, but they will remain officially enrolled in one of the five member schools. That way, kids enrolled in an elementary immersion program do not have to go through the D.C. charter lottery process for secondary school, and risk losing their spot.

While kids enrolled in one of the five member schools are given preference, the remaining spots will be available via the citywide lottery. Enrollment tops out at about 1,200 for grades six through 12. Rioux-Bailey expects to have about 200 sixth- and seventh-graders when the school opens its doors in the fall. As with other public charter schools, siblings of enrolled students will be given preference.

Public charter schools are not the only ones breaking new ground. This year, Saint Anselm’s Abbey, an independent all-boys Catholic school in the Michigan Park neighborhood of Northeast DC, started offering Arabic, one of 13 languages deemed “critical” to national security and diplomacy by the State Department and Pentagon, as a regular four-year language course, along with French and Spanish. The course was first offered as an elective for high school juniors and seniors in 2007.

Despite being more difficult — students learn both a new alphabet and new language — the course is popular. Roughly 20 students are enrolled in Arabic 1, more than double the course’s enrollment two years ago, making the course the most popular language offered by the school, second to Spanish.

For the first two years, students study spoken Arabic, specifically the Egyptian dialect, which is spoken by 20 percent of Arabic speakers and understood by most, given the prevalence of Egyptian media. Once students have a grasp on spoken Arabic they learn modern standard Arabic, the more formal written language.

Students can take Arabic starting in eighth grade. This spring, the school will also offer an honors class on Middle Eastern culture, history and religion that is open to all students.

The language classes also have a cultural component that includes discussion of current events and reading Arabic literature, in translation at the lower levels and in Arabic for more advanced students. “[T]he cultural side of things is really valuable for students,” said Virginia Vassar, who has taught Arabic at Saint Anselm’s since 2011, explaining that it gives students a context for processing things they hear in the news, or depictions of Arabs in Hollywood films, both of which have provided fodder for classroom talks.

“When you’re learning a new language, you are learning how other people think, Vassar said. “I think that has tremendous value for kids.”

Opportunities for learning aren’t limited to the classroom. This fall, Arabic students got an up-close look at Middle Eastern politics and cultural diplomacy as observers at the Arab-U.S. Policy Makers Conference in D.C. This coming spring they will have a chance to test their own diplomatic skills as participants in the Model Arab League.

Through Saint Anselm’s Arabic program, high school students have also gained access to internship opportunities usually reserved for college or graduate school students. Arabic students in the upper grades have interned with the SETA Foundation, a D.C.-based Turkish think tank, where they had the opportunity to work with scholars studying social media and the Arab Spring.

Michael Lemmon, a former ambassador to Armenia and former dean of the School of Language Studies at the State Department‘s Foreign Service Institute, is among a group of Saint Anselm’s parents and teachers eager to expand opportunities for internships, exchanges and collaboration with other institutions.

Government is “hungry for people with language skills,” said Lemmon, who advised the school in developing its Arabic program. He emphasized the value of developing fluency early on. If students are fluent before they get to college, “it allows the undergraduate experience to be much richer and more substantive,” he said, adding that government and businesses are looking to hire people who understand language not just superficially, but on a cultural level.