Home The Washington Diplomat February 2020 Chiura Obata Broadened Our View of America, Capturing Both Its Wonder and Shame 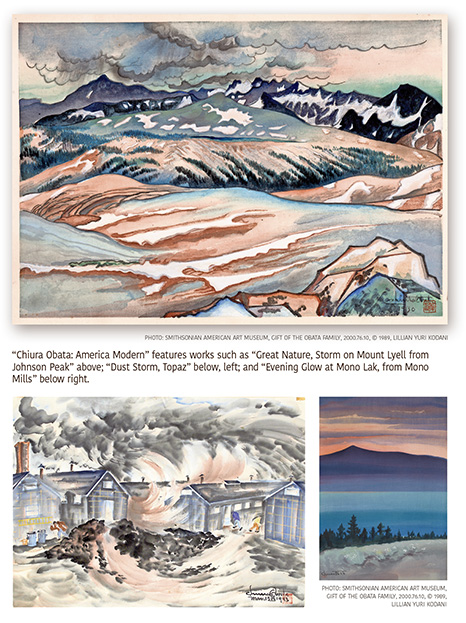 A transcendent exhibition at the Smithsonian American Art Museum celebrates both the beauty of the American West and the powerful story of the immigrant artist who captured these dramatic landscapes with his distinct vision.

The exhibition mixes beautiful images with documentary history, iconic American landscapes with incredible American failure. It highlights immigrants’ important contributions while not shying away from the realities of the experience. And it contests the notion of the American canon of art even as it seeks to broaden it.

“What exactly is the American canon? And who gets to define that canon? And then we’re looking at Obata and trying to say, how does he fit in? But it’s the other way around — how his productive career challenges and also expands the definition of American art,” ShiPu Wang, professor of art history at the University of California, Merced, and the guest curator for the exhibition, told The Washington Diplomat.

Obata, born in 1885 in Japan, immigrated to San Francisco in 1903, becoming a significant artist of the American West who used his signature trans-Pacific style to produce bold landscape paintings of wonders such as the Grand Canyon. The retrospective also nods to the work of Obata’s wife, Haruko, an artist in her own right who specialized in Ikebana, the Japanese art of flower arrangement, and whose designs inspired many of his paintings.

“In terms of immigrants’ contributions … how do we look at them and fit them into a box? But, in fact, what they’re doing is either expanding the box or taking down the borders of the box. So putting Obata into the Smithsonian, really the biggest American art museum, the most important one, is [asking] to not only expand that wall, but also asking the nation to think about these issues,” Wang said, noting that this is the exhibition’s only East Coast venue as well as the final stop of a five-museum tour that started at UC Santa Barbara before going on to Salt Lake City, Sacramento and Okayama, Japan.

During World War II, Obata and his family were forcibly removed by the U.S. government from their home in Berkeley, Calif., where he had been an instructor in the university’s art department, and placed into one of the incarceration camps that housed roughly 120,000 West Coast Japanese Americans, simply owing to their Japanese ancestry. While Obata was interred, he created art schools to help his fellow prisoners while also painting, drawing and sketching what he saw in precise, vivid detail.

These fascinating, unforgettable images are a powerful part of the exhibition, revealing how he used art not only to document the beauty and promise of the United States, but also its stark realities. What’s most striking is the way he approaches the internment experience equally as an artist and reporter, working in a documentary fashion to capture the trauma and mundane aspects of daily life that he and other Japanese Americans lived through while remaining true to his artistry of brushstrokes and washes of color.

In “Dust Storm, Topaz,” for instance, Obata creates a stunning swirl of grey and muted red as dust dominates the scene, with people trying to stand firm in a churning scene within one of the camps the U.S. government forcibly removed him to.

Before and after the war, Obata sought to capture what he called “Great Nature” and sketched iconic views of Yosemite and the Eastern Sierra during hiking trips. His most well-known images stem from a six-week visit to Yosemite in the summer of 1927 with artist friends, where he produced around 150 paintings. He later called the trip “the greatest harvest for my whole life and future in painting.”

This exhibition radiates with Obata’s passion for California’s landscapes. In one exquisite work, “Evening Glow at Mono Lake, from Mono Mills,” a color woodcut on paper, the artist paints a delicate scene infused with light, color and calm. The layers of rich pinks and purples of the sky ripple over the spectacular blues of the otherworldly lake. Through this picture, Obata captures in color what he wrote about the scene: “When we reached Mono Lake the tranquil lake did not even ripple. A mysterious feeling overwhelmed us. It was beyond description.”

This wonderful, comprehensive exhibition showcases an incredible talent. The beauty of the work is matched by the remarkable life he lived, a powerful American and particularly Californian story. “Chiura Obata: American Modern” is a must-see exhibition for Washington this year, by turns moving, calming and infuriating.

“The exhibition title is also asking people to think about these issues — we’re calling his Chiura Obata, ‘American Modern.’ Anybody who has done Asian American studies would realize that Asian Americans have not traditionally been in those discussions, especially art…. We are with the title, in a way, inserting him into the discourse — asking people to think about why when they see an Asian name, they don’t, say, equate that with American or modernism,” Wang explained.

“In Asian art, people tend to think about the traditional ink painting and all that right from before 1900. But even though he does also do ink painting, his ink painting is a kind of modern expression,” Wang added. “So what do we mean by modernism? Is it just bias from one perspective and excluding the other perspective? So the title is sort of a caution, as well as a larger question.”