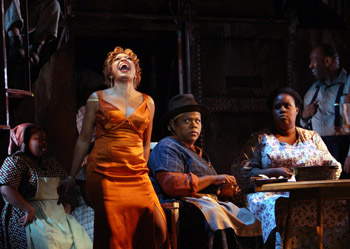 When many people think of “traditional” opera, lyrics such as these seldom come to mind: “It’s summertime and the living is easy. Fish are jumping and the cotton is high. Your daddy’s rich and your mama’s good looking” — sung by great American jazz and folk stylists.

That’s the challenge and the alluring gifts contained in “Porgy and Bess,” George Gershwin’s quintessentially American opera that kicks off the latter part of the Washington National Opera’s 2009-2010 season this spring.

It’s also a challenge for acclaimed, risk-taking director Francesca Zambello, for whom “Porgy and Bess” was one of those projects she always wanted to take on, and one that she’s now done several times. The challenge is largely one of perception — the popular idea that “Porgy and Bess” isn’t really an opera in the classical opera-devotee sense, but that it belongs in the Broadway musical category. Zambello can eloquently make mince-meat of that notion, one held dearly by groups she calls “opera snobs.”

“Porgy and Bess” is one of the most enduring and cross-culturally popular musical works in American history, with an obvious appeal to African American audiences and mainstream audiences. Gershwin, the son of Jewish immigrants from Russia, fell in love with the source material for “Porgy” written by DuBose Heyward. The composer was smitten by the slim novel about the residents of an impoverished, colorful ghetto called Catfish Row in South Carolina — including Porgy, a crippled black man living in the slums, and Bess, the woman he loves almost unconditionally, even though she’s addicted to drugs and dubious men. 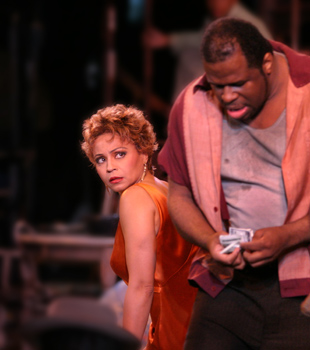 Gershwin originally envisioned “Porgy and Bess” as an “American folk opera.” The work premiered in New York in 1935 and featured an entire cast of classically trained African American singers — a daring choice at the time — but “Porgy and Bess” would not be widely accepted in the United States as a legitimate opera until 1976, when the Houston Grand Opera’s production of Gershwin’s complete score established it as an artistic triumph, though controversy over how blacks are portrayed in the opera remains.

“I think sometimes people who love opera and everything it stands for don’t see ‘Porgy’ as a real opera,” Zambello told The Washington Diplomat. “But let’s look at this: It’s emotionally over the top, it’s full of violence, unrequited love, it has tragedy, a dramatic social setting, it’s soaring in its feeling — all elements in classic opera works by Verdi, Wagner, Puccini, etc. And when it’s done properly, it is very much an opera, an American opera.”

Zambello can skillfully defend the work and its place in popular culture as well as the world of opera. Like many contemporary directors, she’s comfortable moving between several artistic worlds, in her case from opera to theater.

An American raised in Europe, Zambello speaks French, Italian, German and Russian. She attended Moscow University in 1976 and graduated from Colgate University in 1978. Her debut was at the Houston Grand Opera with a production of “Fidelio” in 1984. Since then, Zambello has directed an impressive range of opera and theater works, including the world premiere of “An American Tragedy,” “Cyrano” and “Les Troyens” for the Metropolitan Opera, “Porgy and Bess” (several times), “Die Walküre” for the Washington National Opera — for whom she’s directing her acclaimed version of “Salome” in the fall — as well as “La Bohème” at the Royal Albert Hall and “War and Peace” at the Paris Opera, among many other productions. She’s also directed “Show Boat” in London, “The Little Prince” and “West Side Story,” and most recently, she took on Disney by directing “The Little Mermaid,” which became a big Broadway hit and is set to go on a national tour.

“I think a lot of the ideas involved in ‘Porgy and Bess’ are about outsiders,” Zambello explained. “It’s something inherent in so much of operatic and theatrical work. This is a community outside the mainstream of American life, and the main characters are outsiders themselves.” 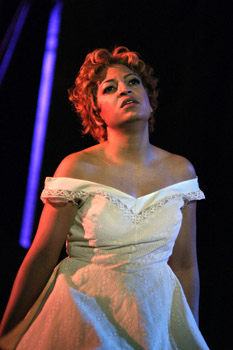 Zambello, who divides her time between London and New York, says the work is “original, it’s authentic, it’s operatic. Sometimes the problem is that the ‘songs’ are familiar, that the music is characterized as coming from Tin Pan Alley, and therefore not serious. That’s simply not true.”

For Eric Owens, who plays Porgy (he also did the role in San Francisco), this production marks a big year for the bass-baritone, especially in Washington. He was Don Basilio in the season-opening Washington Opera production of “The Barber of Seville,” he joined the National Symphony Orchestra at the Kennedy Center for Handel’s “Messiah,” and he performed in the concert version of contemporary composer John Adams’s “The Wound Dresser” about Walt Whitman.

“It’s been quite a ride, that’s for sure,” Owens told The Diplomat. “But ‘Porgy’ is challenging in a very different way. It’s the kind of thing that’s so familiar that people have expectations, depending on the audience, and you have to honor that.”

Also moving is the role of Porgy, a man who’s hopelessly in love with the wrong woman but remains undaunted. “There’s an element of risk in it, sure,” Owens said. “It’s challenging too, in terms of singing and acting, not to mention the mobility factor.”

Previous productions of “Porgy and Bess” had Owens moving around on a wheel cart, pushing himself across the stage, he said. “We have crutches. It’s a little easier.”

Owens relishes the process. “In rehearsals, that’s where you do the heavy lifting — you grow into the part, the role, the voice, all the little and big stuff that the audience sees and hears,” he said. “Being in front of a big audience … that’s the reward. It’s impossible to describe.”