The coronavirus pandemic has put the spotlight on creativity. As cities shut down to slow the disease’s spread, business owners, government leaders, teachers and parents have had to be resourceful to find new ways of engaging their audiences. For the performing arts, this has meant meeting patrons where they are: at home. And what they’re finding is that innovative online programming, largely thrown together quickly and reactively at the outset, may just be here to stay.

When “shelter at home” orders came in mid-March, Jenny Bilfield and her team at Washington Performing Arts (WPA) had to decide which artists on the spring schedule were best suited for an online format. Data shows that the viewing time for digital performances tends to be 45 to 75 minutes, said Bilfield, president and chief executive officer of WPA, so they have worked with performers on shortening their programs or breaking them into multiple parts.

WPA has also created a suite of complementary events that are accessible for free or with the purchase of a concert package or to those who make philanthropic donations. For instance, viewers can see what happens during a sound check, engage in Q&A sessions with artists, interact with WPA staff or take a master class.

“To be faced with basically a nonnegotiable reality of a pandemic and the need to cancel mass gatherings, there was a combination of grief that was directed into action,” Bilfield told us. “It’s challenging to be hyper-productive in a period where the inclination might be to stand still and be paralyzed. I was so proud of our team that the response was to mobilize quickly.”

The result is WPA Home Delivery, which has four main programming areas: WPA Live, which consists of streamed performances across various genres; A Night In, which are build-your-own experiences such as education sessions and artist fun facts; Education and Exploration, including on-demand lessons on how to make instruments out of household materials; and Washington Performing Arts Spotlight, which spotlights award-winning performers.

Some of the more popular online events have been “A Night In with the Philadelphia Orchestra,” which has the longest history of any partnership with WPA, Bilfield said, adding that she expects “A Night In with Zakir Hussain,” a tabla virtuoso who blends traditional and contemporary Indian music, to also be a big draw. Overall, Home Delivery has received more than 10,000 views.

“Slowly but surely, there’s momentum building,” Bilfield said. “I think with any of these efforts, you have to be consistent and interesting and not just put lots of content up there that can be experienced at any point. We like the mix of live and archival. It’s very true to our mission to create a deeper experience.”

When the 39-year-old Strathmore, based in Bethesda, Md., closed on March 13, it was also quick to create new content accessible online. Popular programs include the Saturday Morning Jam Sessions, Live from the Living Room concerts on Wednesday evenings and creative writing workshops. Online viewership for performances is about 5,000.

“That is great increase in digital interaction with Strathmore around content,” said Monica Jeffries Hazangeles, president and CEO of Strathmore, a multidisciplinary arts center that features performances in a main music center, smaller events in the mansion and a new 250-seat venue called AMP at the nearby Pike & Rose development complex.

“We have a lot of folks interact with our website, but we haven’t had a great deal of content to interact with — specific programs for real-time participation,” Jeffries Hazangeles said. “So in that way, it’s a new activity for us.”

Strathmore has several upcoming Live from the Mansion virtual concerts by performers in its Artist in Residence program that will be available on Strathmore’s Facebook page on Wednesdays through August at 7:30 p.m.

A virtual kids art camp is also available for the weeks Aug. 3 and 10 (along with a teen art camp the week of July 29). Other online programming includes “Step Up at Home!” with Nneka Onyima of Step Afrika! on July 13 at noon; virtual art talks for kids and adults; and the 12th Annual UkeFest, which goes virtual Aug. 14 to 19.

“Rather than operating from a place of depletion, we prefer to look at it from the vantage point of being inspired and full and bold and hopeful,” Jeffries Hazangeles said. “That, I think, is really having a very energizing effect on our constituents, our patrons.” 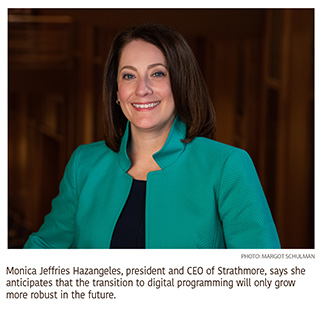 Still, the economic impact on these arts organizations has been significant. In 2019, Strathmore achieved record-breaking sales, surpassing $5 million in ticket sales and bringing in $16.7 million in revenue.

“Strathmore was very balanced, I would say, in that we had a really healthy percentage of our revenue coming from earned activities,” Jeffries Hazangeles said. “At this time, then, we need to rely more heavily on contributions and to explore creative activity that can earn revenue. In that way, we’re developing new partnerships. We’re working with other organizations to determine how else we might use our venues. We’re assisting in distanced programming for not only Strathmore’s programs, but other institutions’ work. That has just required us to be creative and nimble.”

For instance, she’s looking into streaming capabilities and holding rehearsals in spaces that offer more room to spread out.

For the 2020-21 season, Jeffries Hazangeles envisions “a pipeline of creativity.” One project she expects to present is “Monuments,” with Australian artist Craig Walsh, who projects images onto trees. This would be an outdoor, campus-wide effort that Jeffries Hazangeles is working on with the Australian Embassy. Other efforts under way include Jazz at Lincoln Center, a partnership with the Woolly Mammoth Theatre Company on “Parable of the Sower” and a conversation with Israeli-English chef Yotam Ottolenghi.

“Our community is the most diverse in the country, and we are so enriched by those different cultures,” Jeffries Hazangeles said. “We look forward to just a really robust continuation of that partnership.”

WPA is also feeling the economic pain through lost ticket sales. For instance, Bilfield said the group is not seeing the cashflow from subscription sales for the next season. WPA received a Paycheck Protection Program loan, and many patrons opted to convert the value of the tickets they had purchased into donations. Going forward, she’s focusing on a philanthropic model because digital subscription won’t meet what typical sales would have.

“That’s not an expression of resignation, but a challenge and an opportunity to be really creative and reinvent,” Bilfield said. “We just have to find the right path, and I think that we have for us.” 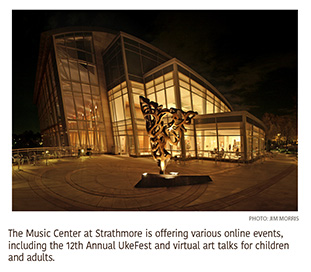 Both women see staying power in the new digital content their organizations are offering.

“In the past 15 weeks, we’ve actually heard from artists, we’ve seen them in their homes, there’s a level of intimacy and connection that I think has drawn people in a very different way to artists that they love,” Bilfield said. “The fact that this is now accessible online means that people all over the country can hear that artist’s voice and potentially interact with them in a way that they wouldn’t be able to during a live experience.”

At Strathmore, Jeffries Hazangeles is looking to incorporate online content into its Windows series, which consists of live performances by people of diverse backgrounds and includes lectures and post-concert conversations.

“I fully anticipate having more of a digital presence for our programming. I think this more continuous conversation with our audiences is going to be something we look to make even more robust in the future,” she said.

Their decisions are in line with those of other performing arts venues in the area and nationwide. The Wolf Trap Foundation for the Performing Arts has shifted to streaming its summer 2020 concert series, the Kennedy Center canceled live performances through the rest of the year and Broadway will remain dark at least through Jan. 3, 2021.

Other places are reopening, however. For instance, the Birchmere music hall in Alexandria, Va., reopened July 8 with limited capacity, and Vienna’s Jammin Java will open its doors July 19.