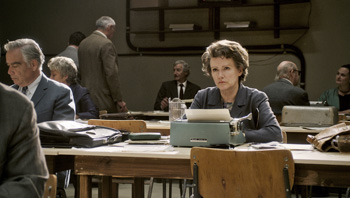 ‘I’m So Excited’ and ‘A Hijacking’ and Repertory Notes

German actress Barbara Sukowa stars in the biopic “Hannah Arendt” about the German-American, secular Jewish scholar who stirred controversy with her coverage of the war crimes trial of Nazi officer Adolf Eichmann.

A self-described political theorist (a label she preferred over philosopher), professor and journalist, Arendt reported on the war crimes trial in Jerusalem of Nazi officer Adolf Eichmann in a five-article series for the New Yorker in 1961 — which was expanded in her 1963 volume, “Eichmann in Jerusalem: A Report on the Banality of Evil.” Two of Arendt’s controversial theses — the “banality of evil” and Jewish councils enabling the Holocaust — became widely debated by the like of Upper West Side intellectuals in the Manhattan cocktail party and other circles.

In 1960, Mossad operatives found highly wanted fugitive Eichmann working as the manager of a Mercedes-Benz factory in Argentina. In an abduction of questionable international legality, they secretly spirited him to Jerusalem to be tried in an Israeli court for crimes against humanity as architect of the Final Solution. Arendt convinces William Shawn, legendary editor of the New Yorker, to capitalize on her academic celebrity by hiring her to cover Eichmann’s trial for the prestigious publication.

Arendt’s acceptance of Eichmann’s claim that he was just a middling bureaucrat following orders from the top was derided. However, she issued a rejoinder, as she explains in a lecture in the film: “The greatest evil in the world is the evil committed by nobody. Evil committed by men without motive or conviction, without a wicked heart or demonic words … is what I call the ‘banality of evil.'”

Also lambasted was her recounting from the trial of evidence that local Jewish leaders, sitting on Jewish councils set up by German officials in territories they occupied during World War II, helped execute Nazi policies — initially believing such cooperation would minimize Jewish deaths and suffering. As Arendt’s memes spread, she was often described as cold, even a Nazi apologist. Though many critics never actually read her work and failed to parse its subtleties, some were close friends whom she lost.

The thespians gallantly tackle the verbose dialogue of the smart screenplay co-written by von Trotta and American screenwriter Pam Katz. Well-paced by von Trotta’s straightforward direction, “Hannah Arendt” unwinds a heady story about ideas that many, including von Trotta herself, once thought impossible to translate into a narrative motion picture. The film is at its best focusing on the events surrounding Eichmann’s trial, punctuated by actual archival footage.

A compelling backdrop is Arendt’s personal journey. After completing her dissertation, she departed Nazi Germany for Paris, only to be briefly detained (before escaping) in an internment camp in World War II France for being an enemy alien, an irony since she was actually stateless after Germany revoked her citizenship because she was Jewish. When Germany occupied France, she fled with her husband to the United States. Arendt finally discovered a stable, content life living in New York City, gaining acclaim in academia. 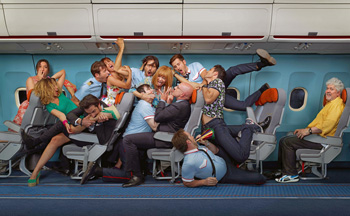 Mayhem takes over the skies in “I’m So Excited,” directed by Pedro Almodóvar, pictured far right.

Following a decade dominated by making films with serious themes, such as “The Skin I Live In,” “Broken Embraces,” “Bad Education” and “Talk to Her,” Spanish bad boy writer-director Pedro Almodóvar is back to his bawdy old self with “I’m So Excited,” an over-the-top farce recalling the campy sex comedies of his earlier work like “Women on the Verge of a Nervous Breakdown.” “I’m So Excited” is set mostly within a plane, providing a built-in physical constraint as in “Women on the Verge of a Nervous Breakdown,” which might result in a stuffy stage piece in the hands of lesser, more conventional directors.

Not so for Almodóvar, a unique auteur who responds by packing more and more of his signature touches into one place, leaving no doubt of the director’s identity. He ratchets up the usual melodrama, secrets and lies, magic realism, etc., while José Luis Alcaine’s florid cinematography uses the ultra-saturated hues that frequent Almodóvar films. The director also taps his usual stable of actors to deliver crazy, outrageous performances. Let’s make clear that “I’m So Excited” is by no means cutting-edge cinema, but it’s great fun for an audience in search of a good time, especially those viewers predisposed to appreciate Almodóvar’s brand of wild, sexy humor.

The film opens with Penélope Cruz and Antonio Banderas, both Almodóvar regular players who have become crossover Hollywood celebrities, making cameos as luggage handlers whose spat unintentionally causes a malfunction. Once aboard Peninsula Flight 2549 flying to Mexico City, technical difficulties are threatening catastrophic failure that the veteran pilots are working hard to resolve. Meanwhile, the male flight attendants — talkative but honest Joserra (Javier Cámara from “Bad Education” and “Talk to Her”), skinny alcohol- and drug-fueled Ulloa (Raúl Arévalo) and obese religious freak Fajas (Carlos Areces), who carries an altar hidden in a briefcase to pray for the passengers — step up to the plate and try to soothe the passengers as much as possible.

The passengers in coach class have been knocked out with sedatives. So the bulk of the action takes place in business class, filled with standard Almodóvar character types like a celebrity dominatrix, death-smelling psychic virgin, shady financier, soap opera heartthrob and a Mexican assassin. When the pilots decide to attempt an emergency landing, the flight attendants double down their efforts to entertain, notably lip-synching to a dance number covering the Pointer Sisters hit “I’m So Excited” and serving Valencia drinks spiked with mescaline. As the alcohol and drugs kick in, life in the clouds gets as wild and complicated as it often can be on the ground. 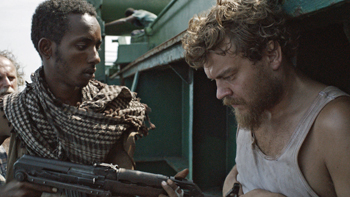 Pilou Asbæk, right, plays a friendly cook whose cargo ship is hijacked by Somali pirates, led by Abdihakin Asgar, left, in the Danish thriller “A Hijacking.”

“A Hijacking,” the impressive solo debut feature helmed by Danish writer-director Tobias Lindholm (co-writer and co-director of the prison drama “R” and co-writer of Danish television hit “Borgen”), works exceeding well as a realistic thriller making the most out of a little. He relies on carefully crafted psychological tension rather than excessive action and violence to move the story, which revolves around the crew of a Danish ship that’s been hijacked by Somali pirates.

Encapsulating Lindholm’s philosophy of “reality rules” — seeking a lack of artifice and maximum authenticity — “A Hijacking” is filmed on location off the coast of Kenya in the Indian Ocean, on an actual ship that in real life was hijacked, and features people with real hijacking experience.

In the opening sequence, the cargo ship MV Rozen’s friendly cook Mikkel (Pilou Asbæk, also from “R” and “Borgen”) anticipates docking soon in Mumbai, after which he plans to retire from life at sea and permanently reunite with his wife and daughter at home in Denmark. Befitting the minimalist aesthetic of “A Hijacking,” the capture of the MV Rozen by Somali pirates happens off-screen. Back in Copenhagen, the shipping company’s CEO, Peter C. Ludvigsen (Søren Malling, of “Borgen”), learns of the hijacking, which is when it’s first revealed to the audience.

Peter hires British expert negotiator Connor (Gary Skjoldmose Porter, a nonprofessional actor who works as a real-life maritime security professional). Disregarding Connor’s advice, Peter decides to speak directly with the hijackers, whose polyglot spokesman Omar (Abdihakin Asgar) makes an opening demand of $15 million for the ransom of the hostages. This time listening to Connor, Peter counters with a measly $250,000. With such a spread, it’s no surprise that the negotiation process drags into months.

As time passes with no end in sight, Mikkel, his best pal and ship’s engineer Jan Sørensen (Roland Møller), and the Rozen’s other crewmembers begin to feel like they have been thrown under the bus by the head office. Their psychological and physical well being rapidly declines, especially as the Somali pirates grow increasingly unstable. Meanwhile, Peter is also facing overwhelming pressures at headquarters.

In addition to the two leads, Asbæk and Malling, the director sticks with a number of proven key collaborators he knows from “R” and “Borgen.” Cinematographer Magnus Nordenhof Jønck and editor Adam Nielsen, who both worked with Lindholm on “R,” provide top-notch technical efforts creating a series of captivating images flowing crisply under Lindholm’s steady direction. The camera smoothly alternates between the contrasting looks of the grimy cargo ship and the shipping company’s modern head office in Copenhagen. Sound designer Morten Green’s spooky sound effects increase the claustrophobia on the isolated ship, while Asbæk and Malling deliver naturalistic portrayals of the two main characters striving to keep it together under pressure.

Ky N. Nguyen is the film reviewer of The Washington Diplomat