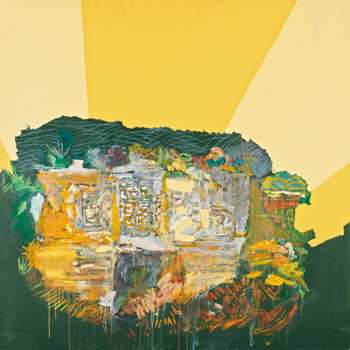 Per Kirkeby’s “A Picture of Yucatan” is part of the first major U.S. exhibition of the acclaimed Danish artist’s work, now on display at the Phillips Collection.

If a visitor to the Phillips Collection was unaware of Per Kirkeby’s formal training as a geologist, they might find clues simply by viewing the gallery’s comprehensive new exhibition of the acclaimed Danish artist’s work.

Earthen vitality infuses many of the 26 paintings and 11 sculptures featured in “Per Kirkeby: Paintings and Sculpture,” the first major exhibition of Kirkeby’s art in the United States. The viewing experience at the Phillips is sometimes akin to tripping around an abstract forest splashed with autumnal rusts, icy blues and sunny yellow hues. The artist, who is still creating, seems deeply interested in time, space and the relationship of natural objects to each other and to human beings. The cycle of life is threaded throughout his art, which he says is constantly in flux, like science itself.

Born in 1938, Per Kirkeby studied natural history with a specialization in Arctic geology at the University of Copenhagen. As a student in the late 1950s, he traveled to Greenland to work as a research assistant. The desolation and geologic significance of Arctic snow and ice was apparently quite a lure for the young scientist. He returned to the region in 1959, 1960 and 1963. A decade later, after a stint at the modern Experimental Art School in Copenhagen, Kirkeby uprooted again, this time to study the Mayan ruins in the ancient Central American cities of Palenque, Yaxchilan, Uxmal and Copán.

This diverse training and geographic exploration obviously informs Kirkeby’s work. The artist and scientist are equally fascinated by the continual evolution of earth itself.

“Everything is collapsing and transforming deep inside the picture,” Kirkeby is quoted as saying in one segment of wall text. 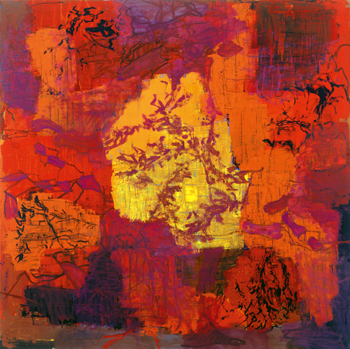 A canvas comprising “New Shadows V” bursts off the wall in an ecstatic explosion of red, orange and violet, while “Fram” is a muddy and foreboding mix of grays, dark greens and inky black. The latter’s bright yellow center, akin to a pinhole in the center of a dark paper cone, rescues the image from resembling pure pollution.

Two of Kirkeby’s chalkboard drawings on display here literally pale by comparison. The faded slates feature skeletal sketching that seems incomplete and leaves the viewer wondering if the artist simply got bored and walked away.

Strolling across the gallery, the exhibition takes on a more representational tone.

An arresting bronze sculpture titled simply “Large Head” returns to an earthen theme. The piece appears as a chunk of black lava, quartz-hard but etched with a seemingly endless array of valleys and creases. Like a less figurative version of the permanent Picasso piece “Head of a Woman” across town at the Hirshhorn Museum, “Large Head” morphs into different images as the viewer takes it in from different angles. It is among the most expressive pieces in the exhibition.

Phillips Director Dorothy Kosinski, a co-curator of the exhibition, explains that Kirkeby’s art often takes time to reveal itself.

“Per Kirkeby’s work calls for slow, deep contemplation,” she said. “His paintings and sculpture are so filled with color, content, inspiration and history that they are sure to spark dialogues with works in our collection and among our visitors.” 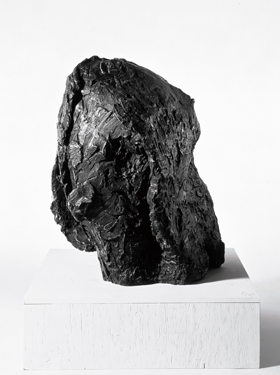 Although Kirkeby is in his mid-70s, he remains a terrifically vital artist. His forays into books and especially film are noteworthy. The artist has collaborated with acclaimed indie filmmaker Lars von Trier on numerous occasions. He also designed the graphics and chapter headings for an offbeat and critically acclaimed 2000 film called “Dancer in the Dark,” which starred Icelandic singer Björk as an Eastern European mother suffering from a progressive blindness that also threatens her young son. (The Phillips Collection will host a special viewing of the film on Dec. 20 at 6 p.m.)

In addition to the carefully selected canvases and bronzes, the exhibition helpfully includes a small cache of this prodigious artist’s films and writings, including his first essays in English. A prolific author, Kirkeby’s poetry often reflects on key influences, including Eugène Delacroix, Paul Gauguin, El Greco, and Vincent van Gogh.

A video loop of one of Kirkeby’s naturalistic videos marked the first time I’ve seen an iPad mounted on a gallery wall. The juxtaposition of technology and traditional art seemed jarring at first, but I suspect it is probably something arts lovers will begin to see more often.

Like the Phillips Collection itself, the Kirkeby exhibition represents a satisfying melding of the traditional and idiosyncratic in art.

Per Kirkeby: Paintings and Sculpture