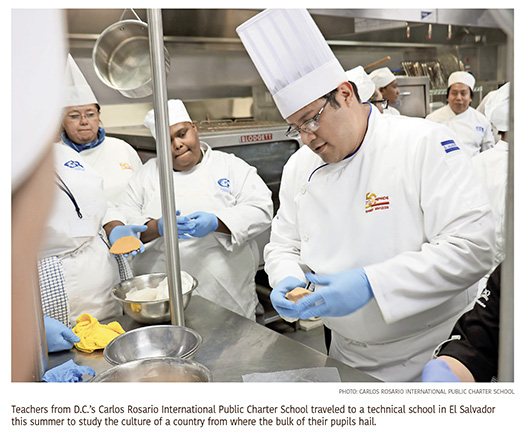 Five teachers from Washington’s Carlos Rosario International Public Charter School became students when they traveled to a technical school in El Salvador this summer. The first concrete result of a Sister City agreement between San Salvador and D.C., the trip enabled the staff members to study the culture of a country from where the bulk of their pupils hail.

Team members from the charter school’s Culinary Arts Academy traveled to San Salvador from July 8 to 23 to visit ITCA-FEPADE, a technical education institute that has provided workforce training to Salvadorans for 50 years. Three instructors, the employment developer and Sebastien Lamerre, the academy director, visited cultural sites, interacted with students and gave culinary demonstrations throughout the country.

“It was enlightening, it was eye-opening, it was discovering new cultures,” Lamerre said. “Foremost for us, it was understanding better the Salvadoran culture and community.”

That’s crucial at the school, where almost half the students are Salvadoran immigrants and 70 percent of the student body speaks Spanish. The next most-represented country is Ethiopia, but students come from 70 countries and speak 50 languages. Named after a Puerto Rican activist and educator, the Carlos Rosario school is a mini United Nations, said Allison Kokkoros, its chief executive officer.

The school is the country’s first adult charter school and the only one in D.C. dedicated to serving foreign-born immigrants. For over 40 years, it has offered tens of thousands of immigrants a holistic learning experience through award-winning education, life skills programs and support services.

Its student makeup reflects the District’s: More than 20,000 Salvadorans live within the city’s boundaries, while about 200,000 reside in the region. More than 14 percent of D.C.’s population was born in another country, according to the American Immigration Council, and the top three countries of origin are El Salvador (15.3% of immigrants), China (4.9%) and Ethiopia (4.7%). 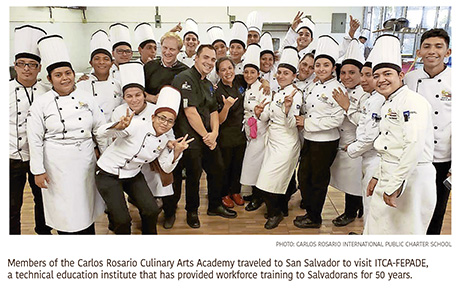 “Our doors are open to serve all immigrants and D.C.’s adult learners,” including those born and raised in D.C., Kokkoros said. “Our mission is to help them to thrive, to have access to equal opportunity through really outstanding education, premier training and support.”

Students range in age from 17 to 70, although a man in his 80s graduated in June from the English as a Second Language (ESOL) program. Since its founding in 1970, the school has graduated more than 71,000 students.

It has a three-pronged model of providing foundational skills to the immigrant community. The first is offering ESOL, citizenship preparation, GED and computer skills literacy programs at its two campuses. The second prong is career certification training for high-demand, high-growth industries such as culinary arts, nurse aides and bilingual tutors or teacher aides. For example, the school’s Construye DC Plus program is a pre-apprenticeship construction trade program that was named the nation’s best innovative workforce training program by Minds that Move Us, an initiative to encourage innovative education models.

The third prong is providing comprehensive services that help students achieve their goals during and after their time at the school.

Carlos Rosario’s partnership with ITCA-FEPADE — known as the Puente/Bridge Exchange Project — meshes with the school’s model and is the result of a 2018 pact that D.C. made with San Salvador at the urging of Mayor Muriel Bowser, along with the Mayor’s Office on Latino Affairs and the Greater Washington Hispanic Chamber of Commerce. Bowser and a delegation that included Kokkoros went to the city in August 2018 to sign a memorandum of understanding with ITCA-FEPADE, with Claudia Ivette Canjura de Centeno, the Salvadoran ambassador to the United States, standing by.

“This partnership that we have is just a really natural initiative for us to be part of,” Kokkoros said.

In January, Carlos Rosario hosted three chefs and an administrator from ITCA-FEPADE. They stayed with school employees and were trained by Benjamin Velazquez, a founder of the Culinary Arts Academy, in an internationally recognized industry certification called ServSafe that trains restaurant workers in the safe preparation and handling of food. There is no equivalent certification in El Salvador, but the visiting chefs left with plans to replicate it in their country to help elevate its culinary and hospitality industries.

They also took part in cultural activities such as seeing a play and visiting New York City and the renown Culinary Institute of America in Hyde Park, N.Y. 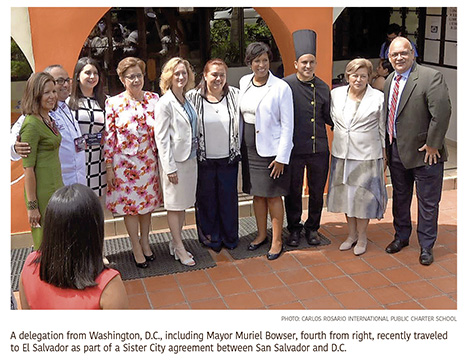 Likewise, the team from Carlos Rosario traveled around El Salvador, including a stop in the coastal municipality of La Unión, an area from where many of the charter school’s students hail. They also visited local markets and sampled fresh fish and tropical fruit that are not as readily available here as they are in El Salvador’s warmer climate.

In observing classes at ITCA-FEPADE, Lamerre and his travel companions learned about Salvadoran cooking techniques and noticed that instructors teach culinary arts by looking at where food is available and accounting for costs.

“I realized we should do that more here as well, emphasizing … what we can do at home as far as budget,” he said. After all, many students work more than one job, are heads of their families and came to the United States to earn money to support not only their loved ones here, but back home, too.

Lamerre was impressed by a restaurant operated entirely by students and coached by chef instructors. “That gives them very good experience on how to cook, serve and even manage because the students are also in charge of making reservations … and planning the menu, just like a real restaurant,” he said.

But the biggest takeaway for Lamerre was the country’s beauty. “Understanding the past history of El Salvador helps us to tailor better our teaching techniques and methods to the El Salvadoran community, but not only to them, but to the Central and South American culture,” he said.

El Salvador is Central America’s smallest country, but it’s also among the poorest and has one of the highest homicide rates in the world: 50.3 per 100,000 inhabitants in 2018. Although that is down from 60.8 in 2017 and 103 in 2015, the State Department issued a travel advisory in January warning travelers to reconsider going there because of crime.

Since 2001, the United States has provided temporary protected status (TPS) to about 200,000 Salvadoran immigrants living and working here, but the Trump administration has moved to end it. First, the deadline was Sept. 9, but that has been extended to Jan. 2, 2020.

What’s more, President Trump decided to cut aid to Central America after blasting Mexico for not stopping a recent influx of immigrants from Northern Triangle countries — Guatemala, Honduras and El Salvador — who have come to the U.S. border to apply for asylum here. While the administration says the cuts are in line with its increasingly strict immigration policies, others say the move is counterproductive because that assistance is designed to curb the very violence and poverty that drive people to flee in the first place. 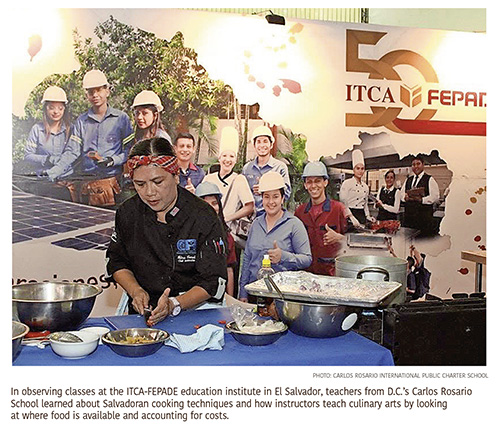 In fiscal 2018, Customs and Border Protection officials apprehended more than 38,000 unaccompanied children and nearly 104,000 people traveling as families from El Salvador, Guatemala and Honduras at the U.S.-Mexico border, according to the Migration Policy Institute. Between 1980 and 2017, the size of the Central American immigrant population in the U.S. grew tenfold from 354,000 to 3.5 million.

Still, El Salvador is more than what we hear about in the news, Kokkoros said.

“There are realities in El Salvador about gangs so that is true, but that’s all we hear about … and it is such an injustice because it’s a beautiful country with the most beautiful natural resources and history and Mayan culture,” she said.

For instance, she visited a newly uncovered Mayan ruin known as the “Pompeii of the Americas” because it was covered by ash until it was discovered in 1978. The buildings there date to the year 660, when the nearby Loma Caldera volcano erupted.

She also saw modernization efforts, including infrastructure improvements such as roads and bridges under construction, and a push for ecotourism. “They have the natural resources and our partnership with them will help them prepare to be on the hospitality side of supporting ecosystem,” Kokkoros said. “It feels like El Salvador could be on the brink of some really exciting new day — growth and recovery from the ravages of their civil war [from 1979 to 1992]. It makes it that much more exciting and it feels that much more important to have some small part to play to support Salvadorans in El Salvador.”

Lamerre concurs. He and his team met a man building a nature destination on a mountaintop that will offer a small resort for guests to stay in and enjoy fishing and hiking.

“One of the things that struck me the most is that in spite of all the challenges and past history, it is amazing to see how the Salvadorans, and particularly the new generation that is growing, how welcoming they are and how happy they are and how willing they are to do whatever it takes to succeed and make a living for themselves. It’s just amazing,” he said.

Carlos Rosario is working on a new MOU to document the partnership’s next steps. For instance, there are plans to hold quarterly meetings via Skype to support ITCA-FEPADE’s ServSafe efforts. Additionally, the D.C. school plans to support its sister institute with resources such as cutting-edge technology.

As part of the first MOU, the MCN Build Foundation pledged $500,000 to San Salvador for a new library, to which Carlos Rosario will donate culinary books, Kokkoros said.

“We approached this knowing that many times Sister Cities that were signed across the nation might be more symbolic, and we decided if we wanted to be part of this, we wanted to support our mayor’s vision of making this Sister City agreement substantive and impactful for both capitals,” Kokkoros said.