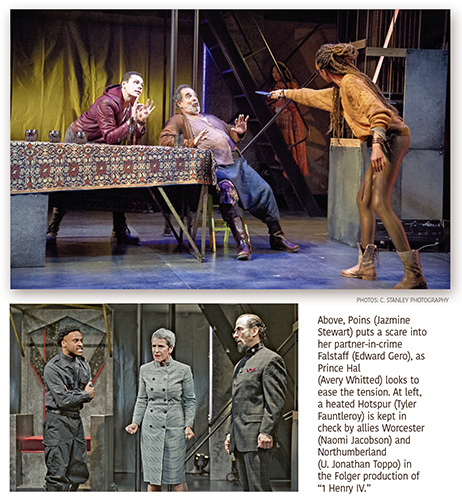 Shakespeare’s “1 Henry IV,” running at the Folger Theatre under the capable direction of Rosa Joshi, is a coming-of-age story about choosing among the various possibilities of who and where one will be. Young Prince Hal of England must choose between the harsh realities of the court ruled by his distant and authoritarian father, Henry IV; the riotous life of the London tavern presided over by Falstaff, lord of misrule; and the battlefield dominated by his rival, the courageous but intemperate Hotspur.

To their credit, Joshi and her cast and crew highlight the contrasts of these various possibilities. In Henry’s court, stern figures stand in harsh light wearing suits that seem to have been inspired by Chairman Mao (credit costume designer Kathleen Geldard). But when Falstaff and his companions enter, they do so down the center aisle (among the people) to the thump-thump of techno music and swirling colored lights (courtesy of sound designer Palmer Hefferan and lighting designer Jesse Belsky). Life with Henry may be hard, even brutal; with Falstaff, it is a full-time party. Neither existence is, perhaps, sustainable for long, which could be Shakespeare’s point. As if developing that idea, Joshi focuses her production on themes of leadership and decision-making, following the young Hal as he navigates his way toward becoming Henry V, one of England’s greatest kings.

Complementing Joshi’s tight direction are standout performances by her cast. Avery Whitted presents Hal as a young man slowly awakening to the realities of who and where he is in the world and what he may be called upon to do. In his first appearance onstage at the tavern in Eastcheap, where he has been leading a dissolute existence under the influence of Falstaff, Whitted’s Hal intimates that a change is coming.

“I … will awhile uphold/The unyok’d humor of … idleness,” he tells us, so that “My reformation, glitt’ring o’er my fault/Shall show more goodly and attract more eyes/Than that which hath no foil to set it off.”

In Whitted’s performance, we see Hal actively contemplating that reformation even as he follows Falstaff back to the tavern. In the climactic scene where Hal and Falstaff dramatize an encounter between the prince and his father, we are not surprised when Hal (as King Henry) banishes “plump Jack” — as Hal in fact will do after he becomes king.

As Hal’s foil, Harry “Hotspur” Percy is the “son who is the theme of honor’s tongue,” as Hal’s father, King Henry, laments in the play’s opening scene. Tyler Fauntleroy brings the right mix of boldness, warlike bravado and dangerous intemperance to the role of Hotspur, appropriately contrasting with Hal’s inward transformation, especially in the scene in which Hotspur prepares to go to war, ignoring his wife’s sensible entreaties not to leave. Of particular note are the occasional comic overtones with which Fauntleroy imbues his Hotspur, a character who can sometimes slip into two-dimensionality. While he remains a sometimes admirable, always headstrong figure, Fauntleroy’s Hotspur is also human and engaging, perhaps despite himself.

Casting a broad (perhaps fat?) shadow across the entire play is Falstaff, masterfully played by four-time Helen Hayes Award winner Edward Gero. As is often the case, the fat, riotous knight immediately engages our attention, but Gero brings to this iconic role an exuberance matched with a depth of sympathy and imagination that make us as interested in what goes on inside Falstaff as outside him. If he is a clown, he is a clown who speaks a truth we all recognize, as literary critic Harold Bloom has noted.

In the pivotal role-playing scene with Prince Hal, as well as in his famous “catechism” on honor late in the play, we see profound insight paired with imagination and humanity. We cheer Gero’s Falstaff on, despite the fact that we know that he and his vices must be rejected. The question is, is there anything Hal can learn from them? Or put another way, does the tavern have anything to teach the court?

Joshi’s production suggests there is. The centerpiece of designer Sara Ryung Clement’s minimalist set, an oversize throne chair marked with the insignia “IV,” is itself a metaphor for Hal’s transformation from tavern companion to future king. When Peter Crook’s severe, calculating King Henry sits atop the structure, it is the symbol of power and repression. But when Falstaff and his companions appear, the throne is upended, becoming the feasting table for the dissolute rabble and the place where the fat knight sleeps off his riot. As a throne, the structure is occupied by a single person, a symbol of control; as a common tavern table, it is a place of welcome and celebration, if the site of much licentiousness.

Finally, when the rebels Hotspur, Glendower and Mortimer gather to make their battle plans in Wales, the structure is transformed yet again into a map stand on which the ill-fated trio lay out their strategies against the king. Each transformation of the throne can be seen as an element of Hal’s journey toward maturity and future leadership — how, as king, he will exercise political power, deal with challenges to his authority and relate to the common masses in his realm.

Shakespeare leaves open the possibility that Hal learns from each of these alternatives. He emulates Hotspur’s bravery and sense of duty on the field of Shrewsbury, defeating his rival while acknowledging the latter’s important and necessary attributes. In the companion play “II Henry IV,” Hal will employ the realpolitik of his father, banishing Falstaff and his destabilizing influence when Hal must assert control over the kingdom he inherits. And after the victory at Shrewsbury, in which Hal saves his father’s life, the prince shows unusual mercy to the rebel Douglas, an act uncharacteristic of his authoritarian father, but perhaps reflective of Falstaff’s plea for mercy. Has Hal learned something from the fat knight, despite himself? Or does Falstaff’s comedic drama serve as a cautionary tale for a future king?

In her director’s notes, Joshi explains that she became interested in “I Henry IV” because of its presentation of “the coming-of-age story of a young leader.” The Folger’s joyful, engaging, often introspective production of this popular history play stays faithful to that narrative, presenting us with a young man who learns from tavern, court and battlefield what it means to lead — and on occasion, to be led.