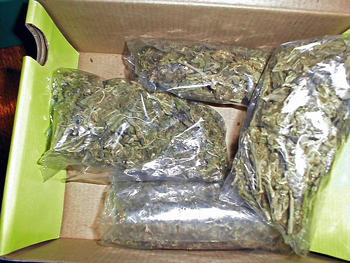 A proposal by FARC rebels in Colombia to legalize the cultivation of coca, poppy and marijuana for medicinal and cultural reasons was only the latest salvo in an increasingly vocal debate on drug policy reform taking place throughout Latin America.

FARC’s proposal is unlikely to gain much traction in a nation whose government has vowed to wipe out the drug trade, with significant military backing from the United States. But increasingly, countries from Colombia to Mexico to Uruguay are questioning the U.S. model of uncompromising drug enforcement.

There’s also been a dramatic shift among Americans, with a December 2012 Quinnipiac poll showing that a majority of U.S. voters (51 percent versus 44 percent) support legalizing marijuana possession. Two U.S. states — Colorado and Washington — recently chose to do just that, legalizing it for recreational purposes and not just medical purposes (as 18 states plus the District of Columbia already do). The moves echo a growing chorus of politicians and lobbyists urging governments throughout the region to change what was once seen as a sacrosanct approach to the possession and sale of illicit drugs.

Critics of America’s war on drugs say it’s a losing battle, draining billions of dollars and incarcerating millions of people, including many low-level offenders (the United States has the highest prison population in the world) — all while doing little to stem the flow of illegal drugs over the last four decades. They argue that money would be better spent treating drug addiction as a public health issue, freeing up resources to focus on violent crime — not to mention generating much-needed tax revenues for state governments that regulate the sale of marijuana.

Tim Lynch, director of the Criminal Justice Project at the CATO Institute — a libertarian think tank that has studied drug legalization for years — said the past decade has seen a “rethinking of drug policy” around the world, but especially in this hemisphere.

Four ounces of low-grade marijuana is usually referred to as a quarter pound, or QP. Several Latin countries and now two U.S. states have made possessing small amounts of marijuana for recreational purposes legal.

“For many years, Washington, D.C., wanted to maintain a united front, taking a hard-line criminal approach,” Lynch said. “The policy was simply how much more money should we put into the program next year. That’s what’s beginning to change. More and more, government officials here at home and abroad are rethinking that approach. That’s why we’re seeing some countries actually taking steps to turn away from the drug war.”

Former Mexican President Vicente Fox publicly called the global war on drugs “an absolute failure.” In 2009, the Mexican Congress approved legislation decriminalizing possession of small amounts of narcotics, including marijuana. America’s neighbor to the south has long argued that the United States needs to focus more on the demand side of the drug equation to curb the profits of violent crime syndicates that have wreaked havoc on the region.

Even Fox’s security-oriented successor, Felipe Calderón, who spearheaded a tough U.S.-backed military crackdown against drug cartels, has urged the adoption of “market alternatives” to stanch the growing level of drug-related violence in Mexico and along the U.S. border.

Calderón along with leaders from Honduras, Belize and Costa Rica have been pushing the United Nations General Assembly to hold a special session on drug prohibition by 2015. Meanwhile, the Organization of American States is studying the impact of current drug policy on Latin America; an OAS review is expected to be finished by this June.

Christopher Sabatini, senior director of policy at the Americas Society/Council of the Americas, said he’s surprised at how quickly the debate has shifted on this issue.

“Five years ago, and certainly 10 years ago, not a lot of mainstream political leaders were talking seriously about this,” he told The Diplomat. “Now, the former presidents of Colombia, Mexico and Brazil said governments should explore the possibility of decriminalization. They didn’t actually say legalization.”

Whatever you call it though, Sabatini suggested it won’t have as big of an impact as people think. For one thing, the U.S. government hasn’t shown any inkling to reverse its longstanding drug policy, with Vice President Joe Biden saying last year that legalization creates more problems than it solves (including possibly a new generation of addicts).

Moreover, Sabatini argues that legalizing small amounts of pot in a few U.S. states won’t deter sophisticated — and creative — drug-running operations that peddle everything from cocaine to sex slaves.

“It’s unclear to what extent Mexican or Colombian marijuana will come to be the main source of consumption in Washington and Colorado,” he said. “My understanding is that a lot of it is grown locally. So I’m not sure it’s going to put much of a dent in trafficking or profits. And most of the narcotics production in Colombia is cocaine. In Mexico, 60 to 70 percent of criminal syndicates’ profits come from cocaine, not marijuana. And no one is talking about legalizing cocaine, a far more serious drug.”

A recent study, however, suggested that the new laws enacted by Colorado and Washington voters would slash Mexican drug cartels’ profits by up to 30 percent, given the likely emergence of cheaper, U.S.-produced marijuana. But Sabatini disputes those findings.

“The effect it’ll probably have is to stop the arrest and punishment of kids for relatively minor drugs. I don’t think it’ll change the nature of the drug wars in these countries.” 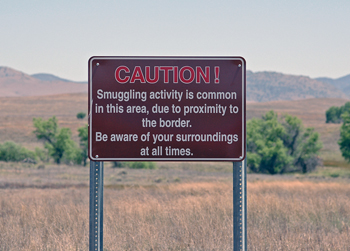 A sign on the U.S.-Mexico border warns against smuggling. The Mexican government has long said that in addition to Washington’s enforcement-heavy approach to curbing the drug supply, Americans need to address the demand side of the drug equation.

Eduardo Vergara, the founder of Asuntos del Sur, an influential Chilean think tank that supports the decriminalization of marijuana possession, adamantly disagrees. He says the war on drugs has become one of the biggest obstacles to development in Latin America.

“Prohibition, along with a war on producers, sellers and mainly users, has had irreversible negative effects on the region. Thousands have died and millions have suffered, while organized crime continues to gain enormous profits that serve to finance terror,” Vergara told The Diplomat in an email from Santiago. “Yet above all, drug use has increased in quantity and diversity, while prisons all over the region are overcrowded with small-scale drug law offenders. There is no doubt that prohibition will be remembered as the most inefficient and expensive policy in modern history.”

Asuntos del Sur recently conducted a survey that it says reveals that “younger generations of Latin Americans are breaking from traditional views and are much more open” to changing their government’s current approach to drug policy.

The lowest level of support for legalization and regulation of marijuana was found in El Salvador (23 percent), while the highest was in Argentina (80 percent) and Chile (79 percent). Seven out of 10 people polled in those two countries said recreational use is an individual right. Meanwhile, respondents across the region expressed low opinions of the effectiveness of government campaigns aimed at reducing drug use; 52 percent of Chileans and 46 percent of Mexicans disapproved of these campaigns.

In Chile, senators have submitted a bill to decriminalize marijuana use, growth and possession. Meanwhile, small amounts of marijuana for personal use have been legalized in both Colombia and Mexico.

Mexico’s former ambassador in D.C., Arturo Sarukhan, says similar moves by Colorado and Washington to legalize marijuana for recreational purposes have muddied the drug-fighting waters. He told an Inter-American Dialogue discussion last year that the United States cannot push his country into waging all-out war against cannabis producers while individual states have themselves legalized marijuana consumption.

But Sarukhan also cautions that legalization is a complex issue that needs to be studied more. He points out that even if cartels are shut out of the marijuana trade, they will simply “muscle into other illicit activities.”

Carlos Urrutia, Colombia’s ambassador to the United States, agrees that legalization should be examined carefully and says only a cohesive approach can tackle a transnational scourge like drug smuggling.

“The time has come to reconsider drug policy, not in a unilateral exercise by one government, but in the context of a global problem. This is something that requires a consensus,” he told The Diplomat. “We’ve achieved significant results in diminishing the area of coca under cultivation, and we’ve had record drug seizures by our security forces. The problem is that once a country is successful, the drug business goes elsewhere.”

But not everyone is waiting for consensus on the issue. Guatemalan President Otto Pérez Molina, a military veteran who’s no slouch when it comes to strong security measures, has been outspoken in calling for the wholesale regulation and taxation of drugs, saying that today’s drug policy is based on the “false premise” that global drug markets can be eradicated.

But the most ambitious legislation of all comes from Uruguay.

Marijuana is already legal for personal use in the small country of 3.4 million wedged in between Argentina and Brazil, but a bill proposed by Uruguay’s Congress would legalize growing and selling the drug within certain restrictions.

Among other things, it would establish a government office to issue licenses for the production, distribution and sale of marijuana. Adults would have to register with that office to buy up to 40 grams of pot per month. Uruguayans would also be allowed to grow cannabis at home, but would be limited to six plants per household. In other words, the government would become the first in the world to sell marijuana directly to its citizens.

Pollsters say the legalization bill would easily pass Congress if put to a vote, but 64 percent of Uruguayans oppose the current plan. That’s why President José Mujica told the bill’s supporters in December to slow things down.

“There is no reason to vote on a law just because it has the majority in parliament,” said Mujica, an ardent supporter of decriminalization. “The majority has to come from the streets. The people have to understand that with violence and putting people in prison, the only thing we are doing is helping the drug trafficking market.”

That reasoning by Uruguay’s 77-year-old head of state earns kudos from Vergara, who calls the decriminalization bill “the most advanced and honest proposal” ever made by a Latin American head of state on the drug issue.

“President Mujica’s pragmatism surprised us all. He had the courage to promote a bold reform to regulate cannabis use in his country,” Vergara said. “Mujica decided to slow down his proposal, looking to get broader public opinion support, which is a good thing. Public opinion needs to be supportive of these measures, but above all, it needs to understand what regulation means and what it will imply for the future of the country.”

Larry Luxner is news editor of the Washington Diplomat.