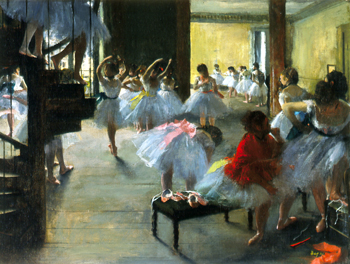 Photo: Trustees of the Corcoran Collection (William A. Clark Collection)

She never achieved real stardom in her lifetime, yet for 125 years, she has been admired and analyzed by critics, curators and high personages from the world of art.

Edgar Degas’s sculpture “Little Dancer Aged Fourteen” took that world by storm when it debuted in 1881, and the young ballerina continues to fascinate onlookers at the National Gallery of Art, where she’s encased in glass and surrounded by a new audience, many craning their necks for a closer look at her.

The wax-clay sculpture, complete with real hair, dominates the room. These days, she’s gained an even bigger life as the star of the exhibition “Degas’s Little Dancer,” shown in conjunction with an upcoming Kennedy Center musical called “Little Dancer” that’s a part-fact, part-fiction account of the gritty backstage world of 19th-century Parisian ballet.

Ballet, of course, is not typically associated with grit. But at the time, the Paris Opera Ballet attracted girls from poor backgrounds — girls like Marie Geneviève van Goethem, who grew up in dire circumstances in the slums of Paris and went on to become one of the petit rats de l’opéra, or “opera rats,” seen as morally corruptible prey for older, wealthy patrons. She and her older sisters were both for a time in the Paris Opera Ballet. Her sister, in fact, achieved stardom, while Marie simply disappeared, her fate really unknown.

Except that Edgar Degas noticed her. 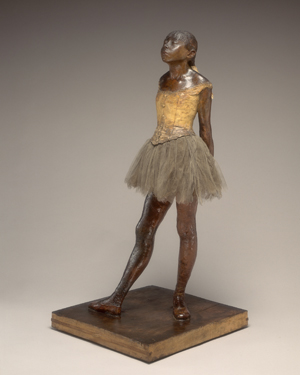 Degas and dance went together. He loved the social, cultural and artistic world, and he saw the stage — both the back and the front — in romantic yet realistic terms.

In fact, more than half of his works depict dancers. He painted lush, swooning paintings of dancers on stage and off, teeming with shadows and bright colors. And he chose Marie van Goethem to be the subject of his wax-clay sculpture, from which came scores of other sculptures, though hers was the only sculpture he chose to exhibit at the 1881 impressionist exhibition in Paris, where onlookers were shocked by his portrayal of a working-class girl.

The artist also created a sensation with his innovative, experimental approach to sculpture. As the National Gallery explains, “Degas did not carve sculpture but used an additive process. ‘Little Dancer’ was modeled in wax over a metal armature, bulked with organic materials including wood, rope and even old paintbrushes in the arms. It was then covered with clay and layers of pigmented wax. Degas further elevated the sculpture’s realism by affixing a wig of human hair to the head and outfitting his ballerina in a cotton-and-silk tutu, a real bodice and linen slippers.”

The National Gallery, which has a veritable treasure trove of Degas’ sculptures and drawings, is home to the largest collection of his surviving original wax sculptures in the world. “Little Dancer” is one of its most popular works.

Indeed, “Little Dancer” is not only astonishingly beautiful, but she is entirely arresting, shining with charisma, right foot forward, hands behind her back and chin out, matter-of-factly demanding to be looked at. She seems real, or as real as a young ballerina — always an ephemeral presence on stage — can look.

The exhibition has surrounded her, literally, with 13 works, including a smaller sculpture, “Study in Nude of Little Dancer Aged Fourteen,” as well as prints, classic paintings and even a schematic diagram of the internals of the sculpture itself, designating the varying materials that make up the “Little Dancer.” 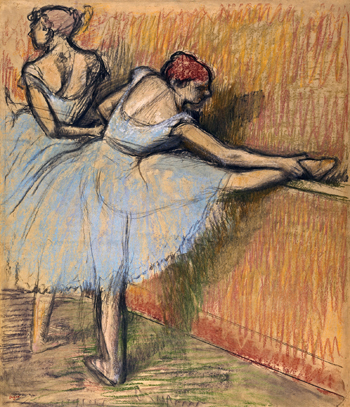 Other ballet-themed works featured include
“The Dance Lesson”

Also included is “The Dance Class,” one of Degas’s iconic paintings that holds the whole world of ballet within its frame, filled with shimmering tutus, dancers in graceful motion, ballet slippers on a bench and rays of light drenching the studio.

The paintings and drawings strip these elements down to the basics and bring the world of dance to dizzying life — a girl seated on the floor in a shower of tutu, another tying a black ribbon around her waist, others with arms lifted and toes pointed.

The works round Marie van Goethem out. She is the princess here, standing, almost defiantly, in her world, just about ready to spring to life.

She will come to life on the stages of the Kennedy Center later this month. In a project that took years to come to fruition, “Little Dancer” re-imagines and transforms Marie’s life, with New York City Ballet principal dancer Tiler Peck starring as the young dancer. In the story, Marie is torn by her family’s poverty, her debt to the artist and the lure of wealthy men as she struggles to keep her place in the corps de ballet. With a Tony Award-winning cast — including Boyd Gaines as Degas — the show is sure to be hit of the fall theater season.

That was not the case when “Little Dancer Aged Fourteen” was first seen in 1881 in Paris, where it was not well received. Some critics denounced the sculpture — which veered from traditional representations of female subjects as goddesses and heroines — and called it ugly. But Degas paid Marie van Goethem the highest compliment: He showed her as she was, vivid and real. He also let her bask in the kind of fame that eluded her during her lifetime, but endures to this day.

through Jan. 11
National Gallery of Art
between 3rd and 9th Streets at Constitution Avenue, NW
For more information, please (202) 737-4215 or visit www.nga.gov.