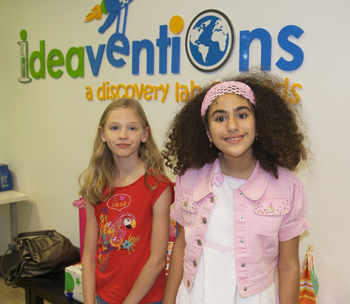 How early is it to immerse your children in science, technology, engineering and math (STEM) studies? High schools in the area increasingly offer specialized STEM courses (see “Schools Try to STEM the Rot in U.S. Education” in last month’s issue), but what about younger students?

According to two parents whose own interest in STEM flourished at the acclaimed Thomas Jefferson High School for Science and Technology in Alexandria, Va., the answer is, it’s “never too early.” Ryan and Juliana Heitz are the founders of Ideaventions, an educational organization that uses inventive, hands-on activities such as 3D printing and fingerprint analysis to make STEM digestible for young ones between the ages of 3 and 13.

“We both went to Thomas Jefferson and were interested in STEM. Fast forward 10 years and we were married with very curious kids,” said Ryan Heitz. “We were looking for STEM education opportunities for them both in and outside of school.”

As their passion for STEM subjects led them to careers in information technology management and environmental science, the couple wanted to recreate the positive science experiences that they had in high school for their own children. The blueprint for Ideaventions began to take shape when they were looking for innovative science classes for their eldest son. They were searching for programs that focused on creative ways of thinking about science that went beyond traditional baking-soda-and-vinegar experiments, but nothing seemed to quite fit.

“What was really disappointing was the lack of depth in the classes. There were more demonstrations and less hands-on activities,” said Ryan Heitz. “The quality of teachers was also a concern. Students weren’t being taught by individuals who were passionate about science or who had a science background. That makes a big difference.”

Children’s natural curiosity and enthusiasm to learn how things work and fit together made the perfect formula for the birth of Ideaventions in 2010. In addition to running science camps and after-school activities with local schools, the organization has 2,000 square feet of space to its name, which is divided into four different lab areas in Oakton, Va.: Newton, Archimedes, Maxwell and Einstein. The space also includes a Mini Museum with hands-on exhibit areas for science, technology, engineering, mathematics and early childhood.

The Newton lab transforms into a mini NASA lab with activities such as developing water-filtration systems and testing parachutes systems. For children who are more into chemistry or biology, the Archimedes lab is the place with activities such as designing spa products or conducting water-quality analysis. Maxwell is a robotics and computer science lab for the aspiring engineer or robot enthusiast that includes a simulated Martian terrain, while the final lab, Einstein, is targeted toward little scientists who learn about insects, study dinosaurs, cast fossils and investigate buoyancy through boat building. 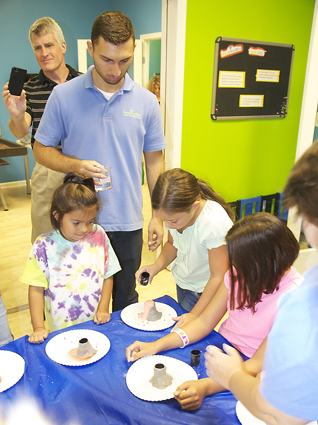 Ideaventions has a 2,000-square-foot science center in Oakton, Va., that is home to four lab spaces, including a robotics and computer science lab that includes a simulated Martian terrain.

Other lab classes explore a range of kid-friendly, STEM-focused topics, among them: cell structures and genetics; the chemistry of the magical spells of wizards and witches-in-training; earthquakes and volcanoes; code-breaking and cryptography; engineering in video games; an oceanography pirate treasure hunt; an electronics secret agents club; kitchen and food chemistry, and a wide array of other inventive programs.

“Instead of a kitchen where kids play with kitchen toys, we have a science play area where they can do experiments,” said Heitz. “We’re very much an R&D organization in that we try to introduce new technology and methods into our curriculum,” he added.

One small thing they keep in mind is how they name classes. For example, according to Heitz, the way a class is named will often turn kids on or off to signing up.

The Ideaventions family is also careful about how they design their programs in order to attract a wide variety of students to pursue STEM opportunities. According to a White House fact sheet, women only represented 24 percent of the STEM workforce in 2009. Ideaventions recognizes this discrepancy and makes every effort to make classes equally appealing to both genders.

Ideaventions has a large number of girls interested in its biology and computer science, for instance. “We try to purposefully design activities to encourage girls. We have very small class sizes, for example, so that kind of atmosphere encourages girls to participate more often,” said Heitz.

Encouraging girls and women to pursue STEM-related fields has also been a priority of the Obama administration. In 2013, President Obama said, “One of the things that I really strongly believe in is that we need to have more girls interested in math, science and engineering. We’ve got half the population that is way underrepresented in those fields and that means that we’ve got a whole bunch of talent … that is not being encouraged.”

Getting kids — boys or girls — excited about science at a young age is one thing. But how do you keep children interested and focused on STEM over the long haul? That’s a question Ideaventions has also grappled with, especially when students reach middle school.

“In middle school, kids are at a critical age,” said Heitz. “They might have enjoyed science class in elementary school, but once they reach middle school, we find there tends to be a lot of interest lost in STEM.”

He attributes this to busier schedules and more activities vying for kids’ time in middle school. However, Heitz thinks the interest in STEM can be maintained by providing more opportunities for kids to remain engaged in the long term.

Recently, Ideaventions collaborated with Ursinus College in Pennsylvania to empower especially gifted middle school students to produce their own research. The initiative, Biomedical Research Academy in Neuroscience (BRAiN), is taught by Ideaventions resident scientist, Catherine Swanwick, who earned her Ph.D. in neuroscience from the University of Virginia. 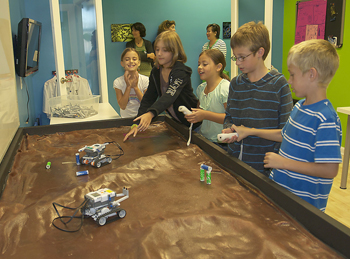 Ideaventions was founded in 2010 by two graduates of Thomas Jefferson School of Science and Technology in Alexandria, Va., who were looking for better STEM educational activities for their children.

“The moment that changed my life was when I first visited a neuroscience lab and got to visualize the neurons in a rat’s brain. I want children everywhere to be able to experience this kind of thrill for science,” says Swanwick.

The BRAiN program aims to teach middle school students about cellular and molecular biology as well as practical, hands-on lab techniques that are used in biomedical research. Part of the students’ task was to use mice brains to examine the effects of prenatal alcohol exposure on the organ’s development.

Long-term impact is exactly what the Heitz team is focused on currently. Both Juliana and Ryan left their careers to dedicate their full energy to the Ideaventions project. In the fall of next year, the couple will embark on an even bigger adventure and open up a private middle school for gifted students with a passion for science and math. The first interest meeting and information session for the Ideaventions Academy for Mathematics and Science will take place Nov. 6 at the Ideaventions headquarters in Oakton, where the Heitzes will communicate their vision for the school to parents of prospective students.

They are also looking for partnerships with corporate industry leaders who can potentially sponsor labs at the school in order to provide research-quality facilities to students.

In the meantime, for parents looking to fill their children’s time during the upcoming winter break with something productive, Ideaventions is hosting its upcoming Winter Break Camp in late December. This year’s camp, whose theme is “winter mysteries and myths,” will explore winter science by investigating stories both old and new, including the popular Disney movie “Frozen.” Kids will examine the movement of glaciers, study crystal formation and growth, and build electrical circuits to create winter LED light displays.