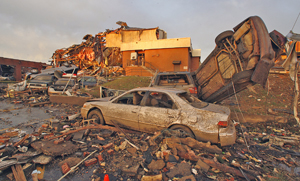 As hurricane season officially begins June 1, media reports reminding residents of the Eastern Seaboard to stock up on water and duct tape start to appear. The National Building Museum wants people to be ready with more than that.

“Designing for Disaster” is a new exhibit that looks at past natural disasters for lessons learned and showcases new innovations that could help keep people safer in the future. The target audience includes building planners, government officials, homeowners, renters and kids — everyone who would play a role in building a disaster mitigation plan from the ground up, both figuratively and literally.

“Statistics show that civilians are generally the first to respond in emergencies, so the more each of us knows about what to do, the better off we’ll all be,” said Chrysanthe Broikos, exhibit curator.

The exhibit comes on the heels of a major national climate report that confirms what many Americans suspected: Climate change is already affecting the entire United States, with costly results that range from rising sea levels, flooding and heat waves to droughts, wildfires and hurricanes. Hundreds of experts argue that climate-related disasters are becoming a fact of American life.

The National Building Museum brings these disasters into sharp relief. The multimedia display, which focuses on earth, air, fire and water, includes objects that survived disasters such as Hurricane Katrina and the 5.8-magnitude earthquake that struck the Washington region in 2011. 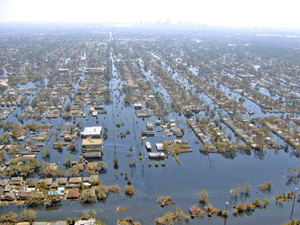 Floodwaters in New Orleans were slow to dissipate after levees failed during Hurricane Katrina, causing billions in damages.

A few must-see features include a partially deconstructed Federal Emergency Management Agency-specified safe room showing how it’s built to withstand tornado-force winds and flying debris. A “wall of wind” lets visitors test roof shapes against simulated hurricane-force winds to determine which is best. Additionally, a button-activated set of moving stairs shows how the expansion of joints in the seating area at California Memorial Stadium would perform in an earthquake. The exhibition also includes images and stories of everyday people who have taken steps, both large and small, to safeguard their homes and families from Mother Nature.

“One of the primary reasons we decided to construct a FEMA-specified safe room in the galleries is to drive home the fact that we really can do something to mitigate the risk we face from tornadoes and extreme winds,” Broikos said. “For years, people thought there was nothing you could do to protect yourself from a tornado, but that isn’t the case anymore. FEMA-specified safe rooms provide near absolute protection.”

In addition to the exhibit, the museum is hosting programs such as “Rebuild by Design” on June 24. It will feature representatives from two winning design teams tasked with envisioning solutions that increase resilience in the regions affected by Hurricane Sandy in 2012.

The idea for the exhibition took shape in 2008, as Hurricane Katrina coverage was beginning to fade, Broikos said. 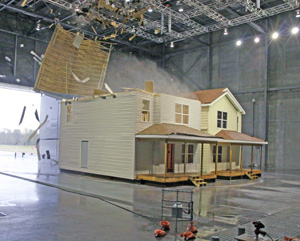 Severe rain, hailstorms, Category 3 hurricanes and even wildfires can be simulated on full-scale test structures at the Institute for Business and Home Safety Research in South Carolina.

“We really felt compelled to take on the subject of building smarter and safer, especially with respect to natural disasters,” she explained. “Determining how to limit the scope was difficult, but from the outset, natural disasters were the focus. We created an advisory council composed of experts in a variety of related fields for the exhibition, and in our very first meeting, they actually recommended ways for us to think about circumscribing the subject — including which disasters tend to have less of an impact on the built environment. For example, that influenced our decision to forgo including volcanoes.”

Although Washington is not in a high-risk zone for natural disasters, it has seen its fair share recently: Hurricane Sandy and a derecho in 2012, “Snowmageddon” in 2010, and Hurricane Isabel in 2003. In 2012, the financial toll of 112 natural disasters in 32 states was more than $100 billion, according to the exhibit’s website.

Having an emergency plan, a preparedness kit and a “go bag” are crucial in any emergency, Broikos said, adding that taking a Community Emergency Response Team training course would be especially helpful.

Other lessons learned and shared in the exhibit include making sure you’re properly insured. For example, people may want flood insurance because nearly a quarter of those who experience severe flooding live outside a floodplain, Broikos noted.

The ultimate goal of the exhibit is to show the public they’re not as vulnerable and helpless in a natural disaster as they think — or as they once were.

“We hope visitors come away with more information about the built environment, and that they can use that knowledge to make more informed decisions,” Broikos said. “We hope visitors understand that we can actually do a lot more to plan and build for disasters, and that communities and individuals all across the country are beginning to do just that.”