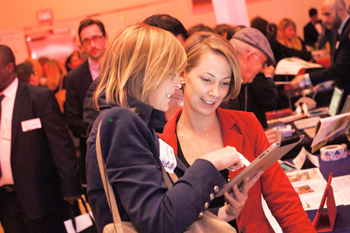 A few short years after the Digital Diplomacy Coalition (DDC) was formed in Washington as a local, informal group for diplomats to share best practices in social media, it has become a global player in the digital diplomacy field.

Begun in 2012 with a handful of communication officers from embassies and think tanks, the organization now has chapters in New York City and Ottawa, and new groups on the horizon in The Hague, London and Tokyo. Many diplomats in Washington directly attribute their embassy’s social media success to their involvement with the grassroots group.

“We started the organization in D.C. to fill a niche,” said Kelsey Glover, public relations manager at the German Marshall Fund who worked on the media team at the Embassy of Afghanistan and now sits on the DDC Board. “There were all these folks in town who were all working on the same issues, and there was a lot to learn from each other. So they really started there and focused on the diplomatic corps in town. From there it grew very quickly, which showed how much of a need there was for an organization like this.”

The Digital Diplomacy Coalition hosts various events throughout the year, both in person and online, to help local embassies navigate the world of social media.

The all-volunteer group has partnered with Google, Fosterly, the Meridian International Center, United Nations Foundation and others to host a variety of events, with topics ranging from “Digital Campaigns for Social Change”; to “An Exit for Extremists: Digital Solutions for Online Counter-Radicalization”; to “e-Estonia: A Global Standard for a Digital Society.”

The DDC grew organically, beginning with a small staff that expanded into leadership and events teams. Now, a global board oversees remote chapters, while the Washington team manages administration and planning for D.C. events.

“At this point the structure is an evolving thing,” Glover said. “A lot of our leadership has actually been called back to their main ministries or have moved on to other locations.”

That rotation of members has paradoxically served the DDC well, as members leaving Washington for other posts help spread the word about the coalition.

“Because of the nature of diplomats and how they change and they go post to post, we were able to spread wide and far,” Glover told us. “With that interest came the New York City chapter, focused more so around the U.N. and a lot of the consulates up there, and Ottawa, Canada, where the government does quite a bit on the digital side, and obviously they have quite a few missions there as well.

“It’s not us looking at a map and pointing and saying we have a presence there,” Glover added. “It’s really about the community there, how it’s been engaged and those on the ground have said they wanted to be involved.”

The message and mission are further spread by the coalition’s own use of digital tools. With a large online presence that includes more than 10,000 followers on Twitter and an active LinkedIn community, the DDC has become a beacon for bloggers, academics and others interested in how governments and NGOs use social media to engage with their followers.

It would be easy for the organization to fall into the standard Beltway events template of four people on a panel discussing one topic with the help of a moderator. Instead, the DDC has held popular happy hours, author events, breakfasts and a wide array of public and invitation-only educational and social functions (yes, even a few panels) on topics ranging from extremism to emerging democracies to social good. In Washington’s crowded events landscape, DDC events consistently draw a crowd, which is no small feat for an organization that’s run entirely by volunteers.

But, Glover says, being a volunteer-run organization has its advantages. “We have more room to breathe and be creative and not be the D.C. event in a box,” she said. “We do things that are more online or that allow us to get really solid partners.

“But at the same time, we are very protective of our community. I mean that in the sense that we want to stay true to our mission, and we want to give our community what they are really interested in, and so it’s a very big balancing act, but one I think we’ve been able to do pretty well so far.”

While it’s impossible to predict what digital tools will be available in five years, and how they’ll be used to foster diplomacy, it’s not as difficult to predict the direction of the coalition.

“In five years, we’d like to see the chapters we have planned now off and running and strong, with the next wave and possibly wave after that,” Glover said. “I think this field is only going to grow and with that, we’re going to have to be nimble and responsive. So instead of setting one across-the-bar metric, it’s just going to be that we have a global presence, that is responsive to the community as it changes.”

Molly McCluskey (@MollyEMcCluskey) is a contributing writer for The Washington Diplomat and has covered Switzerland for a variety of publications.