Home The Washington Diplomat May 2013 Dutch Envoy’s Texas Bride Is All Business, Bliss and Charm 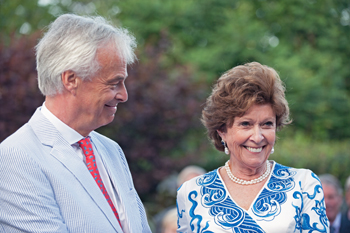 He was born in a small town in the Netherlands and has worked in places ranging from Athens to Angola. She has a spirited Dutch connection but was born in Canada and hails from Texas. The two met in China, and Washington, D.C., is their first home together.

It’s been quite a journey to wedded bliss.

Recently appointed Dutch Ambassador Rudolf Bekink and his businesswoman bride Gabrielle de Kuyper Sheshunoff Bekink are newlyweds who are ready to start their new life together while also using their international savvy and business experience to promote Dutch economic and political ties in the United States (also see this month’s cover profile).

“She doesn’t even pronounce her own Dutch name correctly … and she doesn’t speak Dutch either,” said Bekink with a big smile, laughing with his wife in the library of their residence. In fact, they both laughed a lot throughout the interview — the sheen of new love still glowing brightly.

They met in 2008 at a dinner party in Beijing, where he was the Dutch ambassador to China and she was travelling with the International Council of the Louvre, just one of the many groups to which she is devoted.

They were married in August 2011 at her summer place in Prouts Neck, Maine, with all five of their grown sons from previous marriages and five grandsons in attendance. But their separate careers kept them mostly apart for a year until they moved into the official Dutch Residence in Kalorama in August 2012, shortly after Bekink was appointed to serve in Washington, D.C.

While he heads up the embassy, she maintains a large second-floor office in the residence and handles most of her daily business remotely from Washington. Gabrielle is founder and CEO of Sheshunoff Consulting + Solutions, a provider of executive development, internal audit, loan review, compliance and investment banking services to U.S. financial institutions. From her perch at Sheshunoff Consulting, she’s written about topics such as compliance rules and transparency reform for the financial services industry.

Gabrielle also co-founded Sheshunoff Information Services in 1971 and was its chief executive until 1988, when Thomson Reuters acquired the company. Prior to her work with Sheshunoff, she worked for DeKuyper, a Dutch liquor company that her father brought over to the United States from the Netherlands. She served as executive vice president of John de Kuyper and Zoon B.V. Canada, Ltd., where she was responsible for de Kuyper Canada and U.S. operations.

“I learned a lot from my father about business,” said Gabrielle, who graduated from King’s Hall and attended McGill University in Montreal. “I always thought I would be in business.”

Now, one of her main goals is to help her husband increase the strong business ties between the United States and the Netherlands, which is America’s largest destination country of U.S. foreign direct investment. In fact, Dutch investment in American companies totaled $240 billion in 2011, while American companies increased their investment in the Netherlands to $595 billion. The bilateral relationship also supports nearly 680,000 jobs in the United States. 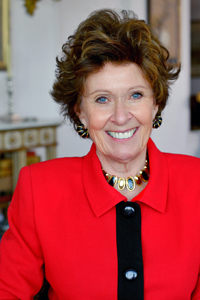 To spread the word about these critical economic links, the ambassador has traveled to U.S. states such as Texas, where Gabrielle was a longtime resident of Austin. Meanwhile, Gabrielle is adjusting to life as an ambassador’s wife, trying to set the stage to host formal events while adding a down-home Southern charm to her diplomatic outreach.

“I brought a lot of furniture and other things with me,” Gabrielle said of moving to Washington. “I’ve rearranged a lot. I want our residence to have the cozy feeling of a home so people will want to stay.”

For example, she replaced the more formal and somewhat uncomfortable dining chairs with 18 inviting, gray-silk overstuffed chairs. “I don’t want anyone to hurry from dinner,” she noted.

To further ensure that everyone lingers over dinner, she also brought in chef Christina Owen from the Four Seasons hotel in Austin. Owen is now in charge of the menus for special embassy events. For one recent buffet — attended by 150 guests, including U.S. state agriculture secretaries — Owen and Gabrielle set out to meld Dutch specialties with American regional cuisine and products.

“I made bitterballen, a croquette served with gravy and mustard. We also had oliebollen, a chili beignet dessert, something like a dried fruit fritter,” Owen said.

When I asked the chef if either the ambassador or his wife like to cook, she was quick to answer.

“The ambassador likes to cook,” Owen replied, especially in the upper private kitchen. His favorite dish is spaghetti bolognese.

“However, they have very sophisticated palates. They enjoy truffles and I do my own thing for them — often a surprise of something lighter, like seafood, fish and shellfish.”

In her spare time, Gabrielle helps to look after their three dogs, 15-year-old Trini, 12-year-old Doortje and 2-year-old Katje. She also enjoys the outdoors. “I like to plan gardens, do the design, but I don’t like to do the digging and get all dirty,” she said.

She’s also active on the civic front, serving on the boards of groups such as the Lady Bird Johnson Wildflower Center and the American Friends of the British Museum.

And they’re both looking forward to meeting new people in the nation’s capital. “I love to meet people who accomplish something in this world. It makes a diplomat cheer,” Bekink said, though he could just as easily have been referring to his blushing new bride.