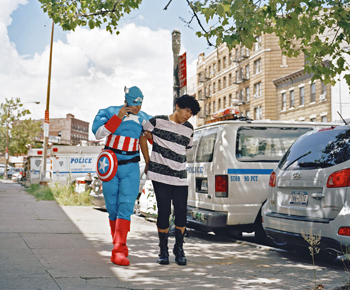 Among the images on display at the Spanish Embassy’s new cultural space is this photo by Dulce Pinzón.

A bare-chested man on rollerblades, a strong-willed girl in a sombrero on a rodeo horse, a young woman in a U.S. military uniform, and a few superheroes scaling walls and catching criminals.

These are among dozens of oversize, vibrant and enigmatic images decorating the grand walls of the Spanish Embassy’s new cultural space on 16th Street in “LATINO/US Cotidiano,” a timely exhibition depicting scenes of daily life in America’s Latino community.

“When people think of Latinos, they often think of stereotypes,” said exhibit curator Claudi Carreras, citing images of poor immigrants or seasonal migrants. “My idea is to try to break down those stereotypes and show the differences in people.”

That idea takes on added relevance as Congress engages in a heated debate over immigration reform. Adding their voices to this national conversation are 12 photographers whose work seeks to upend preconceived notions of Latino identity in the United States, where one out of every six Americans today is of Hispanic origin. This seismic social transformation — Latinos now comprise the largest minority in the U.S. — carries huge political, economic and cultural consequences for all Americans.

Of course, many Latinos in the United States retain the traditions, and quirks, of their homelands. For instance, soap operas — or telenovelas — are widely popular throughout Latin America, including Mexico. Stefan Ruiz, a portraitist, is “interested in the obsession with fame” that they generate.

On location in the Televisa studios in Mexico City, he took large-format shots of actors on their sets, capturing them in costume but not acting, creating a strange dichotomy. “They’re on their break and posing for me for a few minutes. I might choose a spot on the set but would let them pose themselves,” he said.

The results show personas that are real, but not quite. You see a man in dress pants leaning against the kitchen counter holding an apple, waiting to essentially be someone else when the TV cameras turn on. 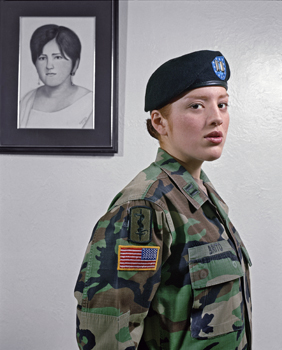 And the two maids in crisp white aprons atop black uniforms sitting demurely by the table in a well-appointed dining room. You wonder what they’re waiting for. A lecture from the butler or orders from the lady of the house? Or are they just waiting to get out of their stiff costumes?

“I wanted to explore social issues through a totally different vehicle — soap operas — but didn’t want to make fun of them,” said Ruiz.

Susana Raab, meanwhile, explores identity and culture by staring directly at real life — but from a skewed perspective. “I like to find emotion in everyday things and to upend stereotypes,” she said.

She also plays with the viewer’s expectations by layering together incongruent scenes. For example, she shot two men in cowboy boots with white straw hats on their laps reclining in massive black armchairs, playing with the chair’s gadgets. They appear to be in their living room but on second glance you see a row of plastic-covered mattresses behind them and realize they’re customers in a Brookstone-like store. But eventually you learn they’re actually in the tradeshow segment of a rodeo in Houston.

In another rodeo image, Raab captures a cacophony of emotions in her portraits of three brightly smiling women in white dresses and red sashes; a troubled girl embracing a man who may or may not be sympathetic to her; and a dour-faced, mustached man in a black sombrero.

Dulce Pinzón also elevates the ordinary into something extraordinary with his series of satirical documentary photos featuring Mexican New Yorkers in everyday jobs such as taxi drivers, window washers and nannies. But he adds a twist to their mundane tasks by asking his subjects to don superhero costumes while they work. 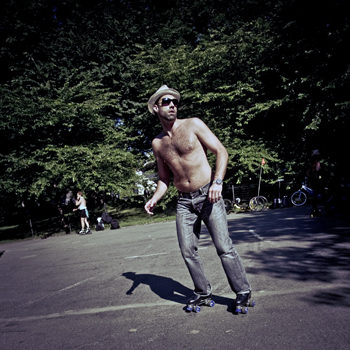 So the bicycle courier is dressed as Superman with a red cape flying in the wind; the coffee shop waiter collects dirty plates clad in a lilac bodysuit and blue elbow-length gloves, while a costumed chimp sits on his shoulder; and a nanny-as-Batman comforts a baby.

They are surreal images “of people just doing their job. But to their families they are superheroes,” said Pinzón.

To that end, on the wall text beside each photo is the person’s name and the money each sends home: “X works in demolitions and sends home $200/week; Y is a policeman and sends home $300/week,” etc.

Domestic scenes get a playful touch in Karen Miranda’s pictures as well. In a crowded living room, a little girl sleeps curled up on a bookshelf while an older woman on the couch is blissfully unaware that she should be in bed. Meanwhile, in a kitchen, a woman is hanging a curtain while appearing to float on one foot — a domestic goddess who floats above the daily grind perhaps?

The various artistic expressions of Latino reality mirror the diversity of a community that straddles many worlds. Of course, Latin influence in the United States is nothing new. The first Spanish explorers landed in Florida more than 500 years ago and today, 50 million people of Hispanic descent live here.

Their impact has never been stronger, says Guillermo Corral, the Spanish Embassy’s cultural counselor. “What this exhibition shows is that Latinos are as vibrant and dynamic as this country, that being Latino is just a way of being American.”