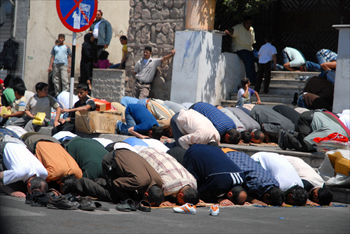 When it comes to democracy, Arabs don’t exactly have a stellar track record. As the Israelis like to point out, theirs is still the only true Western-style democracy in the Middle East.

But that may be about to radically change — just how radically though is a big concern to the entire world.

Given the lightning-speed success of popular uprisings in Egypt and Tunisia, many now believe it’s only a matter of time before repressive Arab dictatorships follow the communist regimes of Eastern Europe into oblivion. How far democracy opens the door to politically sanctioned Islamic religious extremism, however, is a matter of debate — as is the question of whether the Egyptian military can really ever give up power.

David Ottaway, a Middle East expert at the Woodrow Wilson International Center for Scholars, said only three times in modern Arab history — once in Algeria, twice in Sudan — have militaries had the chance to do just that. And all three times, they blew it.

“In October 1988, there was a popular uprising in Algeria like the one we saw in Egypt. The military broke the monopoly of the ruling party, the FLN, and a multiparty system was set up. They liberalized the press so independent newspapers were allowed to flourish,” Ottaway told The Diplomat.

There’s plenty of hand wringing over what role the Muslim Brotherhood will play in Egypt’s future government. The group has renounced violence and provided poor Egyptians with critical social services — no slight point in a nation burdened by high unemployment and rising food prices — yet many Americans worry it will try to impose its vision of Islam on the country.

“But the Islamic party began winning all the elections, so in 1992 the military took over the whole process. That’s the best example of Arab armies starting a pro-democracy process, then reversing themselves and taking power again.”

In Sudan, street uprisings in 1964 and again in 1985 led to brief periods of civilian rule. “But in 1989, the military came back, and has been in power ever since,” Ottaway said.

“So we have no example of an Arab army successfully ushering in a multiparty democracy that survived. The problem is not Islam. It’s that the army is usually the most powerful force in all these countries. Even in Tunisia, we don’t know whether the military will allow a real democratic system.”

Non-Arab Turkey, however, is often cited as a potential model for Egypt, with Turkey’s military supporting an elected civilian leadership, although even there tensions have erupted between the secular military forces and current Islamic-leaning ruling party.

For the moment, many Americans have praised Egypt’s military — which has received tens of billions of dollars in U.S. funding over the last three decades — for its restrained response to the protests, crediting it with tipping the balance of power against President Hosni Mubarak without provoking widespread violence. Indeed, the real fear hasn’t been over a possible military takeover in Egypt — but an Islamist one.

Despite the largely secular nature of the protests, much ink has been spilled about the Muslim Brotherhood, a fundamentalist group established by Islamic scholar Hassan al-Banna in 1928 but banned from political activity in 1954, shortly after Gamal Abdel Nasser’s rise to power.

Nevertheless, the Brotherhood entered Egypt’s political arena in 2005, forming alliances with other parties and fielding independent candidates. After its members won 88 seats in Parliament, the Mubarak regime cracked down on the group, throwing many of its members in jail.

Mubarak also used the Brotherhood as a kind of Islamic boogeyman to justify his own grip on power, a narrative that up until recently was readily accepted by the West, which remains conflicted and confused about the group’s true intentions.

“Its size and diversity, and the legal ban that has kept it from genuine political power in Egypt for decades, make it hard to characterize simply,” wrote Scott Shane in the New York Times, who noted that the group is far from monolithic and “includes both practical reformers and firebrand ideologues.”

It’s also complex and at times contradictory: The Muslim Brotherhood provides vital social services and has renounced violence to participate in the political process, drawing the ire of al-Qaeda, for example, yet it maintains stridently anti-Israel views — in line with Egyptian public opinion — along with fundamentalist attitudes toward women and religious minorities.

The group initially steered clear of the protests in Egypt and — eager to project a moderate image and minimize fears of a takeover — has vowed not to field a presidential candidate in the upcoming election. But it has applied to become an official political party under a new constitution and it remains one of best-organized forces among the fractured and largely leaderless opposition, in part because for years any trace of dissent was brutally suppressed by the Mubarak regime. Plus, it’s only natural that the established Brotherhood will be a key player in shaping Egypt’s future — befitting its popularity as an Islamic party in a majority Muslim nation. Incorporating them into the system rather than ostracizing them could also help to further moderate the party.

For all these reasons, Bruce Riedel, an Islamic specialist at the Brookings Institution, told the New York Times that Washington has no choice but to accept the group’s role in any future Egyptian government.

“If we really want democracy in Egypt, the Muslim Brotherhood is going to be a big part of the picture,” said Riedel, who was the Egypt desk officer at the CIA when Mubarak came to power in 1981. “Rather than demonizing them, we ought to start engaging them now.”

Hussein Hassouna, Washington representative of the Arab League, told The Washington Diplomat that the Brotherhood is an intrinsic part of Egyptian society and must be part of any coalition — with some caveats.

“They’re well entrenched in Egypt and I hope they will play a constructive role. If they have solutions, put them forward. But I don’t think they should be allowed to resort to violence or extremism,” said Hassouna. “When you’re calling for democracy, you should accept the outcome, and it won’t always be in your interests. It’s a dilemma the U.S. faces, but you have to accept reality.”

That reality is becoming more and more obvious for Washington as Islamic parties gain political power in the region — with Hamas winning elections in Gaza, for example, and more recently Hezbollah regaining political control in Lebanon.

Robert Kagan, a senior fellow at Brookings and Iraq war advocate who co-founded the Working Group on Egypt, agrees you have to take the good with the bad in any democracy.

“We were overly spooked by the victory of Hamas. The great fear that people have with Islamist parties is that if they take part in an election, that will be the last election,” he said. “But we over-learned that lesson and we need to get beyond that panicky response. There’s no way for us to go through the long evolution of history without allowing Islamists to participate in democratic society. What are we going to do — support dictators for the rest of eternity because we don’t want Islamists taking their share of some political system in the Middle East? We’ve got to put our money where our mouth is.”

“The golden opportunity is to help Egypt, Tunisia, and perhaps others to hold free and fair elections, and over the long term to develop the institutions that broaden and sustain democracy…. This is incredibly thrilling, and also dangerous. States that hold elections before they’ve had the chance to evolve away from ancient autocratic habits tend to become what Fareed Zakaria called ‘illiberal democracies,'” Traub explained. “Africa is full of states like the Democratic Republic of the Congo that have the formal trappings and official nomenclature of democracy, but none of the accountability or even genuine representativeness.”

Iran falls into that category for Michael Rubin, a fellow at American Enterprise Institute — a conservative think tank — who says he’s worried that Egypt might go the way of the theocratic Islamic republic during its revolution 32 years ago.

“Most people making dark allusions to Iran forget that more than nine months passed between [Ayatollah] Khomeini’s return and the seizure of the U.S. Embassy. The question then becomes, what grievances can the Muslim Brotherhood or other anti-Western forces manufacture in those nine months to try to appeal beyond their natural constituency of perhaps 25 percent?”

Rubin, who lived in Tehran from 1996 to 1999 while pursuing a doctorate in Iranian history, says that “before he came back to Iran, Khomeini said he had no interest in political power, only issues of social justice. But when he returned, he began a reign of terror and firing squads — the point being, a dictator’s fall is really the end of the beginning, rather than the beginning of the end.”

Drawing comparisons between Sunni Arab Egypt and Shiite Persian Iran is difficult. Nevertheless, the West should not let its guard down with the Muslim Brotherhood, according to Robert Satloff, executive director of the Washington Institute for Near East Policy. Writing in the Washington Post, he says the United States should bolster secular groups and democratic institutions in Egypt, while ostracizing the Muslim Brotherhood, arguing that “discriminate democracy” — democracy for all but the Islamists — would protect U.S. security interests.

Others counter that selective democracy is not only a fruitless and unprincipled approach, but will play right into the hands of extremists. To that end, the worst thing, Traub suggested, is to listen to neocons like Stephen Hadley, national security advisor to former President George W. Bush, who advocate delaying elections in Egypt so that civil society and non-Islamist political parties can take root.

“This is a temptation that must be resisted,” he wrote. “First, it wouldn’t do any good: If people want elections, they won’t be dissuaded by being told they’re not ‘ready’ for them. Second, it would reinforce the view that the United States only believes in democracy when the outcome is to its own liking.

“Third, it’s probably unnecessary because the Muslim Brotherhood in Egypt seems to be shying away from power rather than actively seeking it, while Islamists in Tunisia are both less popular and more moderate,” Traub said.

“And finally, the most effective way for the United States to shape outcomes in an increasingly democratic Arab world is to be seen as a champion of popular aspirations. What American policymakers did over the last half-dozen years to promote democracy in the Middle East mattered much less than they thought; what they do now will matter a great deal.”