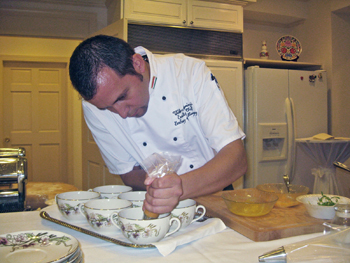 Viktor Merényi, chef for the Hungarian Embassy, prepares soup for the launch of a new interactive cooking series called Culinary Corner that the embassy is offering to local charities and nonprofits.

From Azerbaijan to Spain to Zambia and everywhere in between, D.C. is home to dozens and dozens of embassies from vastly different cultures. With so many divergent interests in one city, what’s the common ingredient that binds this multicultural melting pot together?

The answer is simple: food.

Food is the common denominator that brings people together. It’s also one of the most effective tools in public diplomacy today — who doesn’t want to sample an exotic meal or sip an unfamiliar wine?

Washington’s embassy community has been wise to this trick for years (also see “Delectable Diplomacy: Embassies Cleverly Offer Taste of Culture With Cuisine” in the September 2011 issue of The Washington Diplomat). The State Department has also gotten in on the act with its new Diplomatic Culinary Partnership (see “Hungry to Serve: State Department Dishes Up Smart Power on a Platter” in the November 2012 issue).

On practically any given week in the nation’s capital, there’s some kind of culinary showcase, wine tasting or other gastronomic event connected to an embassy that’s usually open to the public. Some focus on centuries-old culinary traditions, others on newer movements taking the food world by storm, while others spotlight signature dishes or spirits for which a particular country is famous.

Nathan Keegan, who’s in charge of cultural media for the Embassy of Mexico, said the dining experience is considered “a critical component of modern diplomacy.”

“As Mexicans, we’re quite fortunate to have such a storied and diverse national cuisine to aid in such endeavors, and we try our best to feature it here at the Mexican Embassy in creative, unique ways every year,” Keegan said.

For instance, Patricia Jinich, host of the popular cooking program “Pati’s Mexican Table,” has been teaching audiences at the Mexican Cultural Institute about the nuances of Mexican cooking for the last five years. 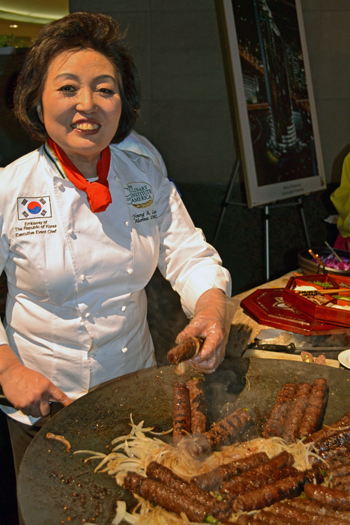 Chef Young A. Byeon Lee of the Embassy of the Republic of Korea was among more than a dozen embassy chefs who participated in the 2012 Embassy Chef Challenge, which Merényi won.

“Beyond the delicacies France is famous for, the tradition of meal sharing is something the French population is very attached to,” Delattre said. “A great French meal is not only synonymous of good food, but also engaging discussions and having good company — we just love that.”

The ambassador added that French people are always proud to foster cultural awareness by sharing their diverse culinary tradition with others — just as they are thrilled to discover new and foreign ones.

Likewise, New Zealand Ambassador Michael Moore said his homeland — while primarily known for its acclaimed lamb and wines, which the embassy often highlights at its functions — has become an amalgamation of culinary inspirations.

“New Zealand food has undergone a revolution over the past generation. That’s a function of major changes in migration and Kiwis traveling and wanting the overseas experience at home,” he told The Diplomat.

“Our wines are medal winners and as a major agricultural exporter we have an abundance of fresh ingredients. While dairy, sheep meat, beef and fish are important to us, serious diversification into venison, olives, exotic fruits and vegetables has taken place,” the ambassador added, noting that “all cultures find a home in New Zealand and the fusion of the cultures and food make us an exciting place to visit and a mecca for international foodies.”

Another culinary mecca is Spain, which boasts a multitude of regions and styles of cooking, said Guillermo Corral, cultural counselor at the Embassy of Spain. Perhaps the best-known Spanish staples are paella, gazpacho and, of course, tapas, or small plates. Corral noted that the embassy often introduces techniques for cooking paella, jamon (ham), tortilla and croquetas at its events.

“Spanish food is varied, healthy — we use always olive oil, a lot of vegetables and fish — and overall, it’s very creative,” he said. 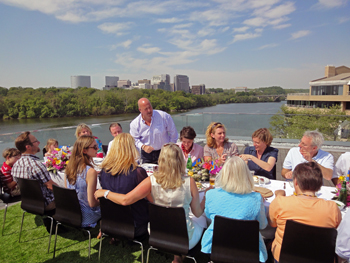 If you’re looking for authentic Spanish restaurants in town, Corral recommends Taberna Del Alabardero, Estadio and Jaleo. The latter, created by celebrity chef and restaurateur José Andrés, introduced the area to the tapas concept. Andrés is a participant in the State Department’s Diplomatic Culinary Partnership and is also well known to the Spanish Embassy; he hosted a farewell reception at one of his Jaleo eateries for former Spanish Ambassador Jorge Dezcallar.

Like their Spanish counterparts, the Peruvians regularly showcase their culinary heritage — namely two delights for which they’re renowned: ceviche, a raw seafood dish marinated in citrus juices and spiced with peppers, as well as pisco, a grape brandy produced in Peru’s winemaking regions.

In October, the Embassy of Peru partnered with the Ministry of Foreign Trade and Tourism and the group PromPerú to host a cebiche and pisco party. The event, which featured chef demonstrations and the short film “You will remember Peru,” also launched a national branding campaign to promote tourism to the country.

Peru’s marketing campaign reflects how food can impact the bottom line — bringing in tourists and building an international reputation that goes far beyond the dinner table.

Food has helped to put Denmark on the map. Noma in Copenhagen has been hailed as one of the most innovative restaurants in the world, drawing attention to the growing popularity of Scandinavian haute cuisine.

Danish Ambassador Peter Taksøe-Jensen said tourists are traveling to Copenhagen for the food — a trend that would’ve been unimaginable just five years ago.

“Clearly our new position on the food map helps create awareness about our culture and what Denmark is about — a small, modest country where equalitarianism and democratic principles are key,” Taksøe-Jensen told us.

Not surprisingly, some of the most active embassies on the Washington dining scene are the Nordic missions.

The Swedish Embassy, in fact, earned a spot on the Travel Channel in a special embassy-focused episode of Andrew Zimmern’s show “Bizarre Foods.” The Icelandic Embassy hosts the annual “Taste of Iceland” to promote itself as a unique travel destination, highlighting the volcanic island’s pure glacial water and fresh fish, as well as other aspects of its culture, such as its thriving music and film industries.

“Come February, the ‘Nordic Cool 2013’ festival at the Kennedy Center will focus on our country’s cultural heritage,” the ambassador added. 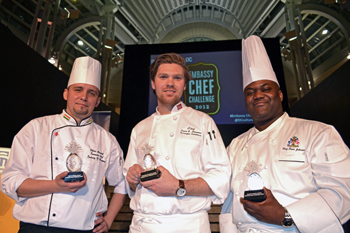 So what constitutes Nordic cuisine? Taksøe-Jensen said the most popular dish in Denmark depends on whom you’re asking, but “clearly ‘smørrebrød,’ or open sandwiches, are very popular.”

“Many Danes still love to eat very traditional foods like porridge, open sandwiches and the classic roast pork with parsley sauce — of course served with a glass of good Danish beer,” Taksøe-Jensen said.

Indeed, although nouveau cuisine attracts tourists and accolades, it’s often the hearty, old-fashioned meals that satisfy the soul. Viktor Merényi, the Hungarian Embassy’s chef for the past four years, says he enjoys putting a modern twist on the comfort foods he grew up with, such as homemade soups, a quintessential family ritual back in Hungary, and his grandmother’s apple pie.

Merényi’s talents will be on display at a new interactive cooking series the embassy has launched called Culinary Corner, which is being offered to local charities and nonprofits.

The chef’s penchant for tradition also won over audiences at the 2012 Embassy Chef Challenge, hosted by Cultural Tourism DC earlier this spring. His slow-cooked beef with traditional Hungarian accompaniments such as paprika, bell peppers and onions took top honors at the “Top Chef”-style culinary competition that draws chefs from more than a dozen embassies each year.

Some 600 people came out to the Ronald Reagan Building and International Trade Center for this year’s challenge, along with star judges such as “Top Chef” finalist Carla Hall and the Washington Post’s Tim Carman.

Merényi will be back for next year’s Embassy Chef Challenge — this time as a judge. And as the winner of the 2012 contest, he’ll determine the secret ingredient all of the embassy chefs have to dish up in a preliminary cook-off that takes place before the main challenge.

The event raises funds for Cultural Tourism DC, a nonprofit coalition of more than 230 local organizations. It’s also a prelude to Cultural Tourism DC’s even bigger extravaganza, Passport DC, a citywide series of international cultural events and embassy open houses in May. And guess what’s usually the main attraction at all those embassy open houses? What else? The food.