Woolly Mammoth jump starts its season with a theatrical bang 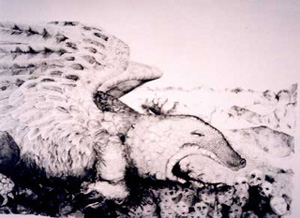 Some of the most fascinating art in the District is tucked away in the city’s embassies, where rotating exhibitions feature works by artists hailing from the missions’ respective countries. These exhibitions may not always be as accessible as those in the city’s larger public museums — often, viewings require an appointment — but this in turn ensures that the spaces remain blissfully uncrowded, allowing viewers the privacy to fully engage with works they might not otherwise encounter.

The embassies of Argentina and Italy each have exhibits this summer highlighting the techniques of two distinct artists: Helga Thomson, from Buenos Aires, and Marco Paoli, from Tuscany. The shows are small, each taking up no more than a single room, yet these intimate spaces demonstrate the breadth of each artist’s work.

Helga Thomson has created a dreamscape in the Embassy of Argentina with complex, mixed-media work that verges on brilliantly nightmarish. The artist, who has exhibited internationally, is familiar with the Washington area, having studied in Maryland and at D.C.’s Corcoran College of Art + Design. Her work spans mediums and subjects and includes etchings, collagraphs, monoprints, digital prints, mixed media and installations. “Marks and Traces” is a retrospective that looks at her expansive talent as it has evolved over the past 45 years.

Helga Thomson’s “New Dark Ages #33” can be seen at the Argentine Embassy.

“My artistic guiding thread has always been to create visual metaphors of events affecting our lives and transforming our surroundings,” Thomson writes in her artist’s statement. “The current exhibit shows some of these: the abuse of power; the darkness of our times; saving graces; and the traps in our current virtual world. I hope to lead the viewer into understanding art as a message, a telegram to inspire awareness and a questioning of the different dimensions of our reality.”

Visual metaphors, indeed: With provocative titles such as “Transparent Society” and “New Dark Ages,” the pieces promise commentary, if not outright critique, of contemporary society. “Transparent Society,” for example, has the very words of its title written repeatedly against the background. In the center of the piece, divided into three panels, we see sketched profiles, pieces of human faces and murky, indecipherable darkness. The piece seems to question the very meaning of the word “transparent,” and its implications for the individual in such a society.

“New Dark Ages,” meanwhile, is a series of four works — this exhibition includes numbers 27, 30, 33 and 34 — each of which contains disturbing and varied imagery, suggesting that these “New Dark Ages” are not singular in nature. In #33, a birdlike creature’s mouth is grotesquely open as it appears to consume a pile of human skulls; #30 depicts an ominous mass of humanoid creatures with somewhat alien faces; faceless soldiers loom over the silhouette of an infant in #27; and #34, perhaps the least immediately understandable of the four, is filled with faces, the largest of which is smeared with what looks like blood. This black-and-white series is notable not only in theme but also in medium: Thomson uses lithography, a form of printmaking, to create images whose intricacy is more akin to detailed sketches, a sign of her talent with the difficult technique.

Curator Alfredo Ratinoff notes the unique nature of printmaking in the exhibition material, calling it “a medium that is beautiful and evasive. Through a complex and iterative process, the artist develops the image slowly, adjusting the lines and the tones until a rich and refined piece comes out of the printing press.”

Where some works in the exhibition are large and vibrant in color, such as “The Tower,” a mixed media piece depicting a bright orange tower emerging from a muted backdrop of purples and reds, others are small, dark and demanding of scrutiny, such as a series comprising “Escape-Return,” “Shift-Command,” “Control-Options” and “The Web-Virtual Meeting,” all of which are constructed of digital-wire mesh. Where Thomson does use color, she does so beautifully, creating distinct moods with specific palettes and not hesitating to limit herself to just one or two colors at times.

“Marks and Traces” carries viewers through Thomson’s dreamscape, in which dark backgrounds, sharp angles and murky details leave much up to the imagination, prompting reflection on each piece’s many meanings. Most evident throughout the exhibition, however, is her remarkable skill as a printmaker and her ability to convey not only technical precision, but also the very visual metaphors to which she aspires.

The Italian Embassy’s spotlight on Marco Paoli is a breathtaking exhibition of photography taken from the artist’s collection “Silenzio” and his upcoming monograph “Ethiopia.” The works create a stunning world atlas of sorts, depicting dozens of locations from the artist’s travels in search of a modern Garden of Eden. Each scene is indeed paradisiacal, with Paoli condensing exquisite beauty into each frame. 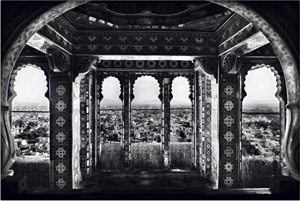 Marco Paoli’s “Jaisalmer Rajasthan,” taken from the photographer’s travels, is on display at the Italian Embassy.

The first half of the exhibit, contained mostly to the rightmost wall, is a celebration of the detail the artist is able to capture in his photographs, which are a blend of landscape and portraiture. His pictures of the Bati market in Ethiopia, for example, seem to capture human subjects almost accidentally, with some people gazing at the camera like deer caught in headlights. Directly adjacent to these is a photograph titled “Rainforest,” depicting a lush tree canopy so precisely that it resembles an oil painting. Whereas the former is filled with human activity and expression, the latter is a quiet meditation on the intricacy of nature.

Paoli pays similar attention to detail in nature in “Mandalay,” taken in Myanmar, which shows trees forming an awning over a dirt walkway whose dust seems almost to drift off the picture and into the gallery itself.

Architectural detail, too, takes center stage in these photographs. In “Ouarzazate,” taken in Morocco, Paoli captures the rough texture of stone and clay, while in “Jaisalmer Rajasthan,” he portrays intricately patterned tiles that showcase the city beneath in a breathtaking feat of symmetry.

The left wall of the exhibition differs noticeably from the first half, in that the photographs are marked not by an amassing of detail and texture, but rather by a strategic use of negative space and light.

“Ionian Islands,” the photograph that is also the cover of Paoli’s book “Silenzio,” epitomizes this shift in composition: A single island fills the center of the frame, dark amidst a vast sea that fades almost to white at the picture’s edges. Water is similarly showcased in “Kandalama Lake,” in which dark twigs emerge from white water. Paoli is employing high contrast here, but he does so effectively, creating a stark, visually appealing effect that highlights the beauty of both the light and the dark.

Where the frames in the first half of the exhibition are filled with information, every inch some new treasure to be discovered and examined, this second half asks viewers to step back and appreciate the artist’s sense of composition, symmetry and minimalism. In the first set of photographs, Eden takes its form in the chaotic beauty of nature and modern life; in the latter half, Eden is a singular entity, emerging into view through water and mist. Viewers can decide for themselves which version of paradise is more appealing, but the otherworldly quality to Paoli’s work is unquestionable.