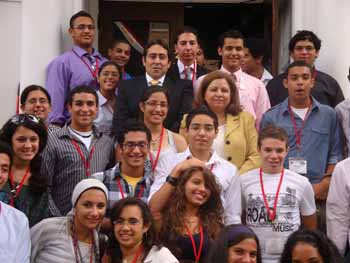 Dr. Maha Kamel, above center, heads up the Egyptian Cultural and Educational Bureau in Washington, which offers free Arabic language classes to locals and various services for Egyptian students. The bureau also helps with other bilateral exchanges, such as the National Geographic Museum’s recent return of a stolen sarcophagus to Egypt, at left.

“Part of the goal is to present modern Egypt, to make people understand it’s not just the pyramids — it’s a modern country,” said Kamel, director of the Egyptian Cultural and Educational Bureau (ECEB). “We’d also like to offer a venue for Egyptians to meet with Americans.”

The ECEB is one of a number of educational bureaus seeking to narrow the understanding gap between the United States and their home country. Many embassies offer cultural activities to the local communities they serve, but some, like the Egyptian Embassy, have bureaus in Washington that also provide educational programming.

The United States and Egypt have a long history of diplomatic relations, with Egypt serving as a key partner in peace brokering in the Middle East. Kamel notes that the ECEB has contributed to the bilateral relationship by building cooperation between education and research centers in the two countries.

The ECEB fills a number of roles here in Washington: It offers financial and informational support for Egyptian students, it administers pre-university exams for Egyptian students, and it also offers free language classes to locals. In the spring, the ECEB offered several levels of colloquial Arabic as well as classical Arabic on Saturday mornings. And Kamel noted that they plan to offer the courses again this coming spring.

“I know there is a real need for Arabic,” Kamel said.

But Kamel admits that the bureau hasn’t always been able to create the intercultural communication it hoped to achieve. She pointed out that while colloquial Arabic classes were popular with Americans, a large percentage of attendees were actually Egyptians who had become American citizens. 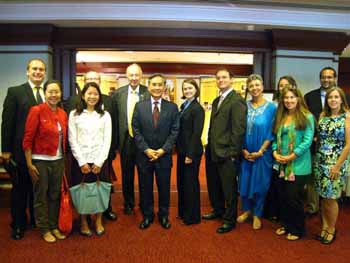 In addition to seeking new ways to increase traffic from Americans, Kamel said the bureau also offers materials for local students who are studying Egypt for school projects.

Yet even if embassies don’t have bureaus dedicated exclusively to educational initiatives, the local diplomatic community has long been integral to promoting cross-cultural education outreach in Washington. Last month’s Education Section in The Washington Diplomat, for instance, profiled three such efforts: “For 40 Years, WPAS and Embassies Team Up to Embrace D.C. Schools,” “From Harlem to Hungary: Officials Explore If Inner-City Program for Poor Minorities Can Help Roma” and “Special Class Guests: EU Diplomats Moonlight as D.C. Teachers for Europe Day.”

The Royal Thai Embassy sees grade school children as the key audience for its educational programming. In late August, the mission officially launched the American-Thai Sister School Program, which is intended to promote global citizenship and learning between American and Thai students.

The initiative is a goodwill, one-year pilot program that will use interactive social media and in-class cultural and educational activities to build a bridge between Thai and U.S. grade schools. Paid for in full by the Royal Thai Embassy, the program will run until August 2011, and if it is received well by Thai and U.S. students, it will extend for at least two additional years. It will include classroom exchanges through video conferencing, shared lessons and reading, as well as quizzes and games for the students to play. 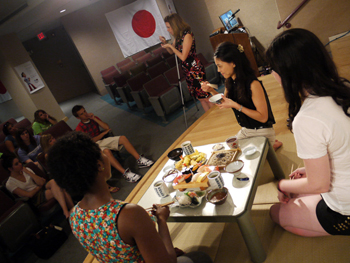 As part of its educational program, the Japan Information and Culture Center makes presentations at area schools on Japanese dining etiquette and other topics that are seen by about 5,000 students every year.

It’s also designed to serve as a launch pad for eventual face-to-face exchanges for some of the students. As part of the Thai Embassy’s initiative, participants will also hold a drawing for U.S. students to win a trip to Thailand for a youth camp in August 2011. A staff member at the embassy notes that the ultimate goal of the endeavor is “a real physical exchange.”

Thai Ambassador Don Pramudwinai explained that the inspiration for the sister school program came from his involvement in a youth program 10 years ago.

“Believe me, helping out the young ones in the ways you can is the best thing that anyone in his or her adulthood can do to really contribute to society, humanity and the world we all live in,” Pramudwinai said. “The future world belongs to them and there is no harm to help guide them now to understand the world better through interfacing with their contemporaries in other world regions.”

The pilot program currently works with 20 schools in Thailand and 13 in the United States, including Roland Park Country School in Baltimore, Md., Janney Elementary School in Washington, D.C., the Harlem Children’s Zone in New York City, and Ogden International School in Chicago.

At the launch of the program, Ogden International Principal Kenneth Staral said that “sister school programs are an invaluable way to expose American students to global education.” 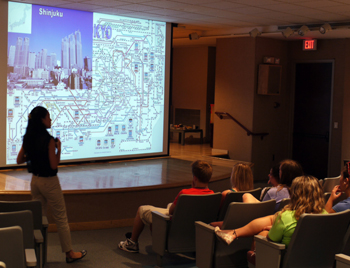 “Just as no living organism can be conceived and bare fruit overnight, we have to go through preparatory stages,” Pramudwinai said. “In effect, our sister school program team are working hard in order to get program off to a good start with an emphasis on qualitative aspects of partnership.”

The staff at the Thai Embassy note that this pilot program came about as a response to President Obama’s emphasis on global education and the need for U.S. students to work with and learn from the international community to succeed in the future.

The history of shared education between the United States and Thailand runs deep, in fact. Formal relations date back to 1833, with Thailand being America’s first Asian ally. More than 10,000 Thai students are currently enrolled in U.S. schools, including students in the American Field Service program and Fulbright Scholars. The Royal Thai Embassy sees the sister school program as the next step in this bilateral relationship.

Staff members describe the program as “cultural in a way, but keenly educational.” They hope to introduce American teaching methods like problem solving to Thai students and help them develop their language skills.

One popular outreach effort does mix culture with education. The Japan Information and Culture Center (JICC), a wing of the Japanese Embassy, works to educate Americans on Japanese culture through programming offered to local D.C. schools.

“The goal is to bring Japan to downtown Washington, D.C., and build people’s understanding about Japanese life and culture,” said Izumi Swarts, the school program coordinator at JICC. “One of the advantages of living or going to school in the Washington, D.C., metropolitan area is that so many useful and interesting resources are right in your neighborhood.”

Swarts notes that JICC’s hour-and-a-half educational program is offered free to local schools interested in having a presentation on Japan. It began in 1981 and is experienced by approximately 5,000 students every year, according to Swarts. The presentation includes an overview of Japanese etiquette and table manners; the sharing of Japanese cultural artifacts, such as kimonos, drums and traditional toys; a lesson on the Japanese language; and an introduction to origami.

Swarts views the programming as a continuation of the first Japanese diplomatic mission to the United States in 1860. For local residents, however, a more memorable moment in U.S.-Japanese relations occurred in 1912, when Tokyo gifted more than 3,000 cherry trees to the United States as a gesture of friendship. The cherry trees now represent a key fixture of the scenery along the Tidal Basin when they bloom in the spring.

“The JICC school program introduces these stories to students not only to promote a better understanding of Japan,” Swarts said, “but also with the hope that the program will lead to a Japan-U.S. relationship that is even better and stronger than it is today.”

Greg Perreault is a freelance writer in Washington, D.C.