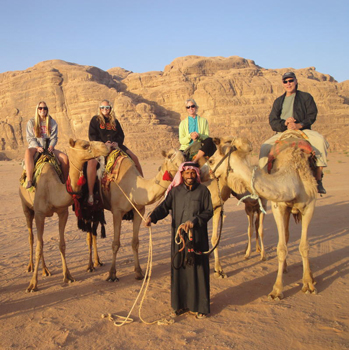 My family and I just returned from a six-week trek through Asia Minor, Egypt and the Middle East. We’re invariably asked what our favorite places were. The more I dwell on that question though, the more I realize that it’s not the places that left a mark; rather, it was the interactions with the local folks that I found to be most compelling. In today’s flat (and flattening) world, we can’t hope to be “global citizens” without wide-ranging multicultural experiences. And we certainly can’t expect our children to do so either without exposing them to different cultures — which is precisely why we brought our two daughters, Kelsey, 19, and Christina, 17, along for this eye-opening experience.

Kathy Kemper, founder of the Institute for Education, and her husband Jim Valentine recently took their two daughters, Kelsey, 19, and Christina, 17, for a six-week trip through Asia Minor, Egypt and the Middle East — which included riding camels with Bedouins in Jordan and excavating artifacts from a cave in Maresha, a city that was once a part of ancient Judea, at left.

Atef Boutros (atef.boutros@link.net), our remarkable Egyptian travel agent, and I spent eight months planning our odyssey. My bottom line to him: Yes, we want to visit the sights, but it’s less about what we see than the people with whom we see it.

With that thought in mind, the Kemper Valentine family headed out for the summer. We pored over the ancient history and culture of each country that we visited, but we also wanted to get a sense of the challenges that each of them faces. For that reason, I asked Atef to connect us with young tour guides. As we were often with our guides day and night, we had a rich opportunity to meet their friends and often their families.

Landing in Istanbul, I was first hit with a striking visual: all the women I saw were covered. I was determined to write the definitive article on this practice, but I soon realized that there are no rules. Religion, national identity and personal preference all play a role in how women dress. It’s not just that there are variations in the material and degree to which the women cover themselves; from country to country, even the words used to describe the garments and fabric change. I gave up trying to sort out all of the details, even as my daughters persisted.

So here are just three variations: One, in what is traditionally described as a burqa, a woman is completely covered in black, so that only her eyes are visible (they lift a flap off of their chin to eat, and their children recognize them by their shoes); two, completely covered — not necessarily in black — except for the faces, hands, and ankles; and three, just the head and neck covered in different configurations (hair revealed, etc.) 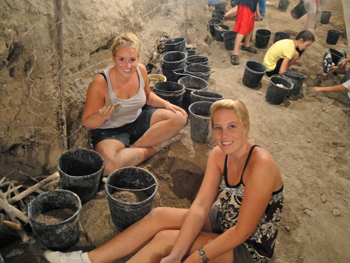 We discovered that the Western perception that these women are repressed belies the trendiness that many of them display. Particularly among those who only covered their heads and necks, many wore high ponytails covered by colorful scarves — giving off a modern silhouette — along with eye makeup and designer jeans; and, of course, nearly all of them had the latest iPhone or BlackBerry.

It was also wonderful to see women in the “Muslim swimsuit,” covered head to toe in fabric that resembles a quick-dry jersey. However, many elite Muslim women who don’t cover themselves frown upon the idea, seeing it as a setback for women’s advancement, and refuse to even acknowledge that the phrase even exists.

In fact, as we made our way through the region, my daughters and I often found ourselves looking at the women around us instead of the sights that we were supposed to be observing, wanting to engage them and learn more. Most were happy to try out their English, and through these ensuing conversations I discovered that there are no fixed rules for covering, which is a highly personal choice and expression.

It was a firsthand lesson that no textbook could convey. “School teaches about different cultures, but traveling helps you understand and embrace them,” said Kelsey Kemper Valentine, who attended Washington International School and will graduate from the University of Southern California in 2013. “Sharing meals with families native to the country, going out with kids who grew up there, and just talking to people on the streets exposes you to the peoples, lifestyle — which is something that books try to teach you, but that you can’t really understand until you experience it yourself. You hear all this talk about improving your multicultural IQs … travel is the perfect crash course!”

I’d be remiss not to mention some of the actual travel sights we saw in Turkey: the Blue Mosque, which we could view from our room in the exceptional Four Seasons Hotel Istanbul at Sultanahmet (www.fourseasons.com/istanbul/); the regal Dolmabahce Palace overlooking the Bosphorus strait in Istanbul that once served as the main administrative center of the Ottoman Empire; and the underground cities that once housed thousands of people in Central Anatolia. We even stayed in a cave dwelling home, taking in the rocky valleys at sunset with Murat Ozguc (murat@travelatelier.com), our entertaining and knowledgeable travel guide, along with his family and friends. 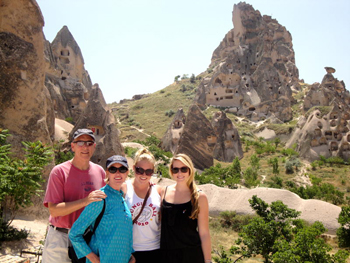 In Egypt, we then took a cruise along the Nile from Luxor to Aswan on the Sonesta St. George (www.sonesta.com/NileCruises/). Because the afternoon heat was so intense, our tour guide, Reda Saeed (gaidoreda@hotmail.com), had us head out by 6 a.m. to see the world’s greatest open air museum: the ruins of ancient Thebes. He educated us on all kinds of topics — everything from tomb building to mummy making — although it can be just as instructive relaxing and watching the life on the banks of the ever-busy Nile float by.

In Cairo, Reda took us to the Great Pyramids Khafre and Menkaure in Giza. Atef and his friends treated us to dinner and champagne (only for Christian Egyptians) to celebrate my birthday on a felucca sail along the Nile, surrounded by the sights and sounds of Cairo, modern and ancient side by side. Customary of Arab hospitality, we enjoyed meals with new Egyptian friends who opened their homes to us and shared family stories along with Muslim customs, rhythms and ways of life.

We visited the elite enclave of Marina on the northern coast of Egypt and stayed at an orthodox Muslim hotel. Even here, the contradictions abounded. On the one hand, every female over the age of 13 was covered. There were no Western bathing suits in sight, there were separate gyms for men and women, and not one bottle of wine was to be seen. On the other hand, Egyptian music played late into the night, hookah smoke filled cafés, families ate their dinners at 10 p.m., and the merriment was hardly indictive of an austere, socially conservative society.

One mile away, we spent our days with friends who live right next to Egyptian President Hosni Mubarak’s brother — high-rent living as I call it, but hardly flashy. As we spent time with our friends and their extended family, I couldn’t help but smile at the hospitality that my family and I had experienced — not only from the wealthy, but from everyone. There’s an admirable, even envious, charm about how ingrained Muslim customs and traditions are in people’s daily lives. 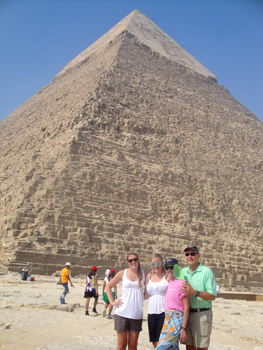 Our guide in Jordan was Wai’L A. Amira (wail-amira@yahoo.com), a Palestinian who told us that he and his family “only” had to relocate four times while he was growing up. He and his male cousins were uncomfortable making any physical contact with myself or my two teenage daughters; they wouldn’t even allow themselves a goodbye hug at our going-away party. Even so, Wai’L opened his life to us, as did Reda, Murat and Atef.

Leaving Jordan and crossing the Allenby Bridge border into Israel was an experience that none of us will ever forget — seeing the partition, walking through the border into Bethlehem, going through security checkpoints. As my daughter Christina said, “Five feet across the border and you are in a different world, different language, the people look different.” Although going into Bethlehem takes five minutes, leaving can take hours. Kelsey and Christina were struck by the presence and confidence of the young Israeli female soldiers, serving their mandatory time in the Israeli Defense Forces, which monitor all of the checkpoints.

Our last highlight in Israel was going to Maresha in ancient Judea, ancestral home of King Herod, for a day of archaeological digging (office@archesem.com). We sat in the dirt, feeling grimy and hot, carefully digging and feeling like professional excavators. We dug up a half of a coffee mug that our instructor identified as coming from the Hellenistic period.

“Living with Jews, Christians, and Muslims shows me how similar we all are and yet how different our traditions and cultures are. I feel like such a larger human being, having this knowledge not only in my head but in my heart,” said Christina Kemper Valentine, who will graduate from the Washington International School in 2011. “School is always talking about language and multicultural competencies. It becomes part of your DNA with international travel.”

Traveling through the Asia Minor, Egypt and the Middle East, we indeed met Muslims, Jews and Christians who granted us intimate access to their families and friends, and shared their values, hopes, politics and literally hundreds of other tidbits about their lives that simply cannot be conveyed by newspapers, textbooks or film. It was this firsthand cross-cultural understanding that we proud to impart to our daughters. In the end, all of us came to appreciate the rhythms of the different cultures as we journeyed through a world at first alien, then achingly familiar, to our own.

Kathy Kemper is founder and chief executive officer of the Institute for Education, whose mission is to promote civility and leadership locally, nationally and in the world community, as well as encourage youth global citizenship with programs that foster intercultural understanding.