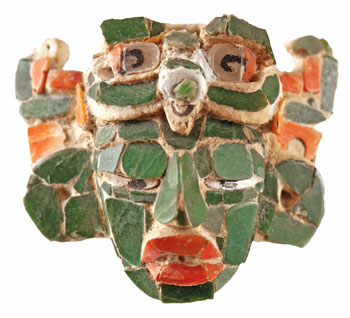 A miniature mosaic of a noble wearing a sun god headdress is among the jade jewelry and other items in “Heavenly Jade of the Maya” at the Inter-Development Bank Cultural Center.

The world didn’t end on Dec. 21, 2012, as some had feared would happen with the “end” of the Maya calendar. But the ancient, rich civilization that flourished in large parts of Central America and Mexico between 250 and 900 A.D. endures today through its culture, legacy and mysterious allure.

The Maya got quite a pop culture jolt this year when an important part of their culture — the cyclical end of the Mayan long count calendar, or bak’tun — somehow got translated and transformed into an end-of-the-world scenario, heightened by last year’s ominous 12-12-12 calendar coincidence. Movies were made, stories were written, rituals were held, and some people made apocalyptic preparations while others gathered at a bar to toast the end of mankind.

Dec. 21 passed by though largely without a peep, but that’s not to say nothing happened. No doubt the remaining indigenous Mayan peoples living in Guatemala, parts of southern Mexico, El Salvador, Honduras and Belize did indeed celebrate the completion of a major calendar cycle in some fashion.

Throughout the rest of the world, the doomsday predictions inadvertently resurrected interest in a dormant culture — one that comes alive at the Inter-Development Bank (IDB) Cultural Center with “Heavenly Jade of the Maya.”

The ambitious exhibition — based in part on recent archeological finds — features rare jewelry made of jade and other items never before seen outside of Guatemala. The objects get to the heart and scope of this advanced Mesoamerican civilization —its rituals, values and their devotion to studying the stars and trying to explain the relation of the individual to the cosmos. At its center of this universe is jade, the beautiful green stone treasured above all else (even gold) by the Maya.

The earliest Maya settlements date back to around 1800 B.C., but the empire rose to prominence beginning in the year 250, building large pyramid structures and a highly structured society of their own. 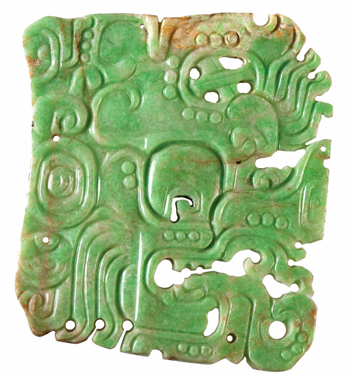 But “Heavenly Jade of the Maya,” composed of precious objects from the National Museum of Archaeology and Ethnology in Guatemala City, is more than a look back at a once-powerful civilization. The Mayan calendar, measured in intervals of 394 years, may be embarking on a new phase, but as a cultural force, the Maya haven’t attracted much attention outside the region and Guatemala. With the exception of the fuss over the doomsday predictions, the Maya have not intensified their place in the historical imagination. This exhibition is clearly an attempt to re-establish a connection to an ancient civilization.

“This is not just about art, or art objects — it’s also about preservation, and resurrection,” said Iván Duque Márquez, chief of the IDB Division of Culture, Solidarity and Creative Affairs. “We are helping with preservation and restoration projects; we’re helping to celebrate the culture of the region, bringing together El Salvador, Belize, Guatemala, Honduras and southern Mexican states.”

IDB President Luis Alberto Moreno said the exhibition “represented an encounter with the history and sensibility of one of the most important cultures of the continent. It is a way of honoring the ancestors and highlighting the people of Mayan origins that today continue to enrich our society.” 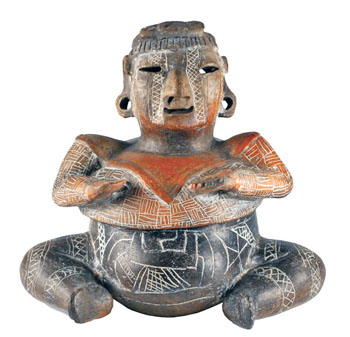 The objects in the exhibition hail from royalty — the jade-encrusted possessions of the ancient kings and queens of the Maya.

A series of figurines from a king’s court, found between 600 and 800 A.D, offers a true sense of what a Mayan court might have looked like. We see not only find the late king among the figurines, but also wrestlers and fighters, priests and scribes, and even a dwarf and disfigured members of the court — people who might have been shunned in other civilizations but are honored here.

Looking at the figures — placed in several circles — you get the feeling that they might come alive, like some hierarchical night at the museum. Among them is a female shaman, who would also figure strongly among the Aztecs. Shamans led the ceremonial rituals that explained the cosmos, the rhythms of nature and the stars.

It helps to have some grounding in the ancient civilizations of the Americas, including their origins and beliefs, to fully appreciate these objects, but they nevertheless hint at something huge — a cradle of creativity, as seen in jade-dotted masks of jaguars, ceramic and jade offerings that symbolized creation, and elaborate headdresses that honor the sun god.

The Maya worshiped otherworldly forces, but unlike so many other civilizations, they also studied them, meticulously producing scientific calendars that rival any we have today — and clearly still enthrall us.

Perhaps the most misunderstood message of the recent “end of the world” hype is what it overlooked. The end of the 13th bak’tun cycle actually marks the beginning of a new era — which, the IDB Cultural Center hopes, will spark a new dawn of appreciation for the Maya and all they left behind.

Heavenly Jade of the Maya