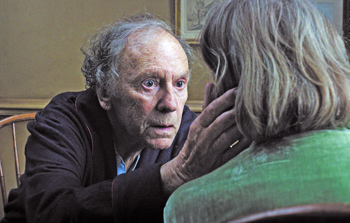 ‘56 Up’ and ‘Quartet’ and Repertory Notes

Jean-Louis Trintignant, left, and Emmanuelle Riva star in Michael Haneke’s poignant “Amour,” which has racked up Oscar nominations, including Best Picture and Best Actress for Riva.

For his French-language critical smash “Amour,” iconoclast German writer-director Michael Haneke (“The Piano Teacher,” “Caché”) captured his second Palme d’Or for best film at the 2012 Cannes Film Festival, following his first Palme d’Or only three years earlier for “The White Ribbon.” Now, “Amour” is up for five Academy Awards, including Best Foreign Language Film, for which it’s a frontrunner, and — in a surprise nomination — Best Motion Picture.

Austria’s official submission to the Oscars, which will be held later this month on Feb. 24, also secured nods for Best Director and Best Writing for Original Screenplay, both for Haneke, as well as Best Actress for Emmanuelle Riva, who at 85 is the all-time oldest Best Actress Oscar nominee. The film’s whopping five Oscar nods are a staggering number; it’s rare that a foreign language film gains such crossover respect from the Academy’s mainstream categories.

“Amour” truly manages to live up to all the hype. Over the years, Haneke has markedly matured as both a writer and director. His well-crafted script is fairly straightforward, minimizing the puzzles prevalent in a mystery like “Caché.” He assuredly directs the action and actors with disciplined objectivity. And the steady cinematography by veteran Iranian-French director of photography Darius Khondji lights up dreamlike scenes, making even modest surroundings memorable.

The story centers around former music teachers Georges (Jean-Louis Trintignant) and Anne (Riva), now in their 80s and still deeply in love after decades of marriage. They live easy, cultured retirements in Paris. But after Anne suffers a debilitating stroke, she pleads with Georges to agree to let her live her last days in the comfort of their beloved home. As things get worse, their musician daughter Eva (Isabelle Huppert) increasingly visits from her current home in a foreign country, where her attentions have been mostly drawn to her career and husband. Despite Eva’s insistence that Anne will have better care in a nursing home, which would also make life much easier for all involved, Georges sticks to his vow to Anne despite its continuing, overwhelming hardship.

The haunting performances by French acting legends Riva and Trintignant, barely recognizable well past their prime, captivate the audience’s attention with poignant emotions portrayed with subtle resonance. Younger, though now middle-age, French star Huppert (Haneke’s regular leading lady in “The Piano Teacher” and “White Ribbon”) shines in a supporting role in which her character expresses the embrace of life, contrasting with her parents’ quiet acceptance of the inevitability of decline and death.

Ups and Downs of Time 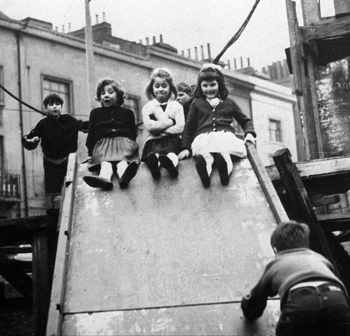 Jackie, Lynn and Sue are seen at age 7 in Michael Apted’s “56 Up,” a fascinating documentary series that tracks a group of English school children every seven years throughout their lives.

“56 Up” is the latest fascinating installment in renowned British filmmaker Michael Apted’s (“Coal Miner’s Daughter,” “Gorillas in the Mist,” “The World Is Not Enough,” “Nell”) long-lasting documentary series, all historical treasures of contemporary social analysis. In 1964, Paul Almond’s seminal British television documentary “Seven Up!” interviewed 14 English school children, all age 7, from a broad demographic spectrum about their day-to-day lives and future aspirations. Their enlightening responses revealed remarkable reflections on the Jesuit proverb: “Give me a child until he is seven, and I will give you the man.”

Every seven years since 1964, “Seven Up” researcher Apted has continued the project, directing sequel documentaries in which the original subjects are tracked down and asked follow-up questions about where they are now versus where they had planned to be. Not all of the subjects are still interested in participating, but most have endured through the series. The latest installment, 2012’s “56 Up,” which Apted co-directs with Paul Almond, proves to be among the best of the bunch, providing new insights and revelations that add much to the film’s depth.

Well into middle age, all the subjects now have lives quite a long way from when they were originally interviewed at the age of 7, some more so than others. Even at the ripe old age of 56, there’s still room for dramatic changes and surprises in life. They’re asked frank questions about what they have achieved and where they’ve fallen short of their dreams. They discuss their socioeconomic status, health, relationships, children and usually grandchildren. Current interviews are interspersed with the subjects’ remarks on camera from years past, delivering a live time capsule comparing and contrasting the present with the past.

With varying degrees of self-awareness, the subjects evaluate how much of their fates were determined by the situations into which they were born and raised — widely held to be nearly completely deterministic in class-conscious Britain, though real life can be more complex — versus their own individual efforts over the years.

For instance, “Seven Up!” presented Andrew and John as classmates at a pre-preparatory school in Kensington, where the upper-class lads were already insufferable snobs. As could be predicted, they grew up into adulthood developing successful careers as wealthy barristers. In “56 Up,” John insists that his depiction earlier in the series as a privileged elite was misleading. His father’s death when he was 9 forced hardship on his family, requiring his mother to toil at work to support them; he was able to attend Oxford only on scholarship. On the other hand, Suzy was born into a posh life but dropped out of boarding school at 16, after which she worked as a secretary in Paris for a spell.

A street-smart Cockney from the East End of London, Tony failed in his childhood ambition to become a jockey. Instead, he managed to pass London’s notoriously tough exam for taxi drivers, after which he climbed up the ladder. He eventually owned his own cab and earned a good living to support his family. He even accumulated enough capital to dabble in Spanish real estate, a gamble squashed by the global economic downturn that he could not avoid even though he had anticipated it. Yet his disappointments did not prevent him from maintaining his optimism and appreciation for life.

The only minority subject depicted, Symon, began life given up to a children’s home. Not so surprisingly, by “28 Up,” Symon had sired five children. By “35 Up,” he had divorced his first wife. By “42 Up,” he was estranged from some of his children from his first marriage, but he had wed Vienetta, a second wife with whom he had fathered a 4-year-old. By “56 Up,” Symon and Vienetta had undergone classes to become foster parents. Taking a certain level of personal responsibility, he assigned his low socioeconomic status to his own lack of initiative rather than his impoverished upbringing. He supported himself as a manual laborer in a freight warehouse near Heathrow struggling to make ends meet, but he seemed relatively at peace with his current circumstances, proving money is not necessarily correlated with happiness. 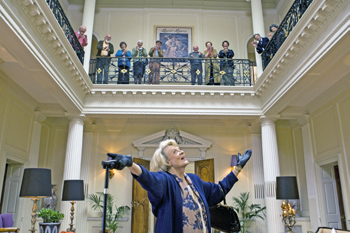 Acclaimed American movie star Dustin Hoffman finally takes up directing for the first time at age 75 with “Quartet,” a breezy British comedy-drama. The smart script, adroitly adapted by screenwriter Ronald Harwood from his own stage play of the same name, is filled to the brim with liveliness, dry wit and elegance.

In the vein of “The Best Exotic Marigold Hotel,” “Quartet” offers upbeat, enjoyable movie content designed for grown-ups — and not necessarily only senior citizens — looking for a cinematic experience more mature than action superheroes fueled by computer-driven special effects.

“Quartet” benefits from the solid foundation of a strong screenplay, but it also succeeds because Hoffman does not neglect emphasizing what he knows best: quality acting. The director is helped by fine, spirited performances from a veteran British ensemble cast that knows a thing or two about acting. They turn in appropriately hammy performances befitting characters near the end of a lifetime putting on shows for live audiences, firing off barbed wits with style. There’s only so much that the director can do to disguise the film’s origins as a staged play, but “Quartet” manages to overcome its stagy roots to a more than sufficient degree, resulting in a rather impressive result, especially for a directorial debut.

“Quartet” takes place in Beecham House, a grand, well-maintained retirement home for aging musicians to live out their golden years in a semblance of luxury. Easing the banality of a pampered life of leisure, the corridors are filled with whispers that a new housemate, reportedly a huge star, is on the way to join them. When the gossip turns out to be true, residents Wilfred Bond (Billy Connolly), Cecily Robson (Pauline Collins) and Reginald Paget (Tom Courtenay), formerly members of a singing group, are stunned to discover the newcomer happens to be Jean Horton (Dame Maggie Smith, recently of “Downton Abbey”), their ex-lead singer, long since estranged from the group.

Jean’s madly successful solo career had given her a big head, which destroyed her friendly relations with the rest of the quartet. The frayed tensions also caused Jean and Reggie to divorce, so he’s especially unsettled with her unexpected presence. Perhaps a change in time and place can allow everyone to make amends. With luck, a reunion at Beecham House’s gala concert may be in order!


Programmed with the aid of the Embassy of Spain and the Institut Ramon Llull, the retrospective “Isaki Lacuesta: The Artist’s Ruse” (Feb. 3-24) reviews the work of the Catalan filmmaker, “a visual adventurer who seeks subjects that others would find daunting,” according to the National Gallery of Art.

“The Nicholas Brothers: Born to Dance” (Sat., Feb. 9, 2:30 p.m.) is an illustrated talk by Bruce Goldstein (director of repertory programming at New York’s Film Forum) about his friends the Nicholas Brothers, Fayard (1914-2006) and Harold (1921-2000), leading African American dancers known for show-stopping numbers in films such as “Stormy Weather” and “Sun Valley Serenade.”

In a Ciné-Concert accompanied by Andrew Simpson on piano, Thomas Ince’s 1919 “One a Minute” is preceded by his 1914 “O Mimi San” (Sat., Feb. 16, 2 p.m.), a Japan-set melodrama that was the first American cycle to star Asian performers. Brian Taves (author of “Thomas Ince: Hollywood’s Independent Pioneer”) introduces the silent double bill.

A Library of Congress restoration of Michael Roemer and Robert M. Young’s “Nothing But a Man” (Sat., Feb. 16, 4:30 p.m.) showcases the unromantic depiction of the African American lifestyle, with a Motown soundtrack, that was a hit at international festivals in the early 1960s.


The British documentary “When China Met Africa” (Wed., Feb. 13, 7 p.m.) is followed by a Q&A with co-director Nick Francis via Skype.

Always a crowd favorite, the 17th annual Iranian Film Festival 2013 (through Feb. 23) continues with “Rhino Season,” “The Last Step,” “No Men Allowed a.k.a. No Entry for Men” and “The Iran Job,” with directors Till Schauder and Sara Nodjoumi in person.


The “Mapping Democracy in Film” series (through Feb. 20) continues with “Democracy Under Attack – An Intervention” (Mon., Feb. 11 6:30 p.m.), introduced by Romuald Karmakar (an independent filmmaker based in Berlin) in discussion with professor Peter C. Pfeiffer of Georgetown University. In between the screenings of “American Casino” (Thu., Feb. 21, 6 p.m.) and “Marx Reloaded” (Thu., Feb. 21, 8 p.m.), Andrew and Leslie Cockburn (“American Casino” filmmakers) and Ulrich Steinvorth (George Mason University and Hamburg University) lead a discussion about the financial crisis.