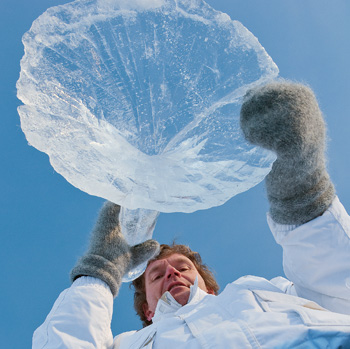 Terje Isungset’s “Icemusic” in which his instruments melt during the concert.

This year, the Kennedy Center is going north for the winter with Nordic Cool 2013, its first festival devoted to Nordic culture. The event boasts dozens of theater and dance performances, concerts, art and history exhibits, food tastings and films with the purpose of increasing awareness about this distinct region in Europe.

“This festival encompasses an experience for all the senses,” said Danish Ambassador Peter Taksøe. “Over the course of a month you will see, hear, smell and feel all good things Nordic.”

Past festivals of this scale at the Kennedy Center have highlighted China, India and the Arab world. Nordic Cool runs from Feb. 19 to March 17 and will include more than 700 artists from Denmark, Finland, Iceland, Norway and Sweden as well as Greenland, the Faroe Islands and the Áland Islands — a part of the world not well known here, said Alicia Adams, festival curator and vice president of international programming and dance at the Kennedy Center.

“In conversations with many colleagues in the arts and others, it became obvious that Americans are not as aware of Northern Europe and particularly the Nordic countries as they are of other countries,” said Adams, who expects Nordic Cool to reach more than 1 million people. “The goal is to reflect the art and culture of this region in a way that is almost as effective as traveling there. This festival explores the interplay of themes central to Nordic life, such as nature, technological innovation, environmental sustainability, entrepreneurial spirit and youth culture.”

Exposing people to Nordic culture is the goal of the Royal Norwegian Embassy’s participation, said Linken Berryman, press and culture counselor there. “It seems self-evident to those of us who work at the embassy that Norwegian culture is vibrant, exciting and contemporary — but does America know that? Does the world? We want to show people,” she said.

The festival aims to do just that, with a plethora of events that showcase the region’s breathtaking natural landscape (such as its midnight summer sun and sparkling pure water), its progressive attitudes on social issues such as women’s rights, and its world-renowned reputation for design, technological innovations and green initiatives. 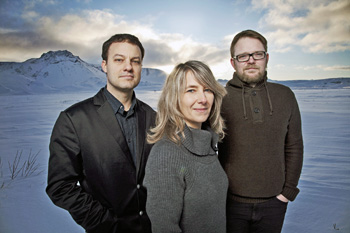 The Sunna Gunnlaugs Trio from Iceland

“During our international festivals, the building is transformed by visual art exhibits, performances fill our nine stages, there will be panels, film screenings and literature from the region, and even the cuisine in the café and restaurant reflect the culture of the festival,” Adams said, adding that a light installation representing the Northern Lights by a Danish artist will be beamed onto the façade of the building during the festival.

Other exhibits running throughout the festival spotlight Nordic architecture and contemporary design, the history of the Nobel Prize and, of all things, plywood, which was invented in Sweden and is one of the oldest mass-produced products in the world.

Adams noted that among the must-see shows are performances of “Fanny and Alexander” by Sweden’s Royal Dramatic Theatre from March 7 to 9 and Franz Kafka’s “Metamorphosis” by Vesturport Theatre of Iceland from Feb. 20 to 22. Other highlights include the opening concert by the Royal Stockholm Philharmonic on Feb. 19, a March 2 knitting workshop by Icelandic designer Steinunn Sigurd that incorporates music, and a special section for children featuring LEGOs — created in Denmark — and interactive games.

“The festival gives Denmark an opportunity to showcase the Nordic region we are part of and our mutual cultural heritage,” said Taksøe-Jensen, who looks forward to the Danish Dance Theatre’s “Love Songs” performance set to Danish jazz singer Caroline Henderson’s music on March 1 and 2. “We are one region — and still very diverse. It’s important and fun to showcase our similarities and our diversities through art and culture.” 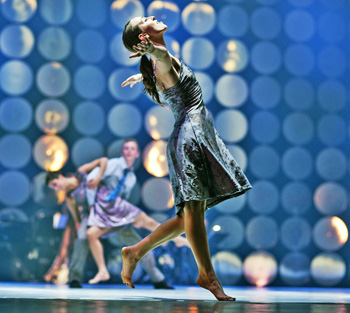 Norway will be represented by a dance troupe, six musical acts, two plays, two films, art exhibitions, writers and architects. “I think people will be surprised to see such a wide presentation of art and culture from a country as small as Norway,” Berryman said.

One of the more unique shows will be Terje Isungset’s “Icemusic” on Feb. 23. “Mr. Isungset makes his own instruments out of ice from ancient glaciers,” Berryman said. “Over the course of his concerts, his instruments melt, changing the way they sound.”

Norway will also host a Nordic tasting at the embassy on Feb. 25. Berryman expects about 60 guests to attend this $100-per-person meal, where the food will be prepared by the embassy’s executive chef, Simon Idsø, using Norwegian techniques and methods, including the preservation methods of salting, curing, smoking and pickling that the New Nordic cuisine movement embraces. 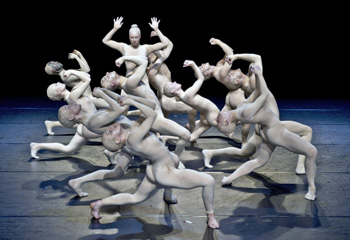 Among the many performances and events featured in Nordic Cool 2013 at the Kennedy Center are Norway’s Carte Blanche contemporary dance company’s “Corps de Walk.”

Recognizing that the fastest way to cultural understanding may very well be through the stomach, the festival spotlights New Nordic cuisine, the creation of which is often credited to Denmark’s René Redzepi, who co-founded and is head chef of Noma, a restaurant in Copenhagen that has been dubbed the best in the world. Free demonstrations of New Nordic cooking will be presented by award-winning chefs from Finland and Iceland on Feb. 25, and from Denmark, Norway and Sweden on March 3.

“Nordic Cool 2013 gives a great opportunity to show northern values, as Nordic cooperation is one of the world’s most extensive forms of regional, cultural and political collaboration,” said Anneli Halonen, cultural counselor at the Embassy of Finland. “The core values that underpin Nordic society include a strong common cultural identity, democracy, tolerance, gender equality and freedom of expression. The Nordic countries have a long tradition of global responsibility and working together at the international level to promote these values.”

Halonen said music is an important part of Finnish culture, as evidenced by a performance Feb. 26 by Signmark (aka Marko Vuoriheimo), creator of the world’s first sign language hip hop DVD.

“We Finns are very proud of our music education at all levels; all Finnish children learn to read musical notation,” Halonen said.

Overall, the diplomats agree, their goal for the festival is to further interest in the Nordic countries.

“Nations — and with that people — come closer when there is a greater understanding of each other’s culture,” Taksøe-Jensen said. “This festival is an important contribution to bringing America and the Nordics closer together.”