Home The Washington Diplomat September 2011 Energy Wealth Buys Stability In Gulf, But at What Price? 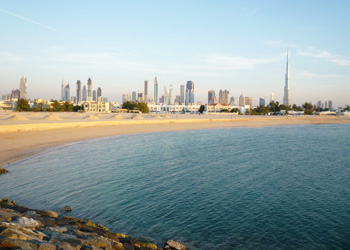 As the Arab Spring turns to fall, deep uncertainty surrounds the burgeoning reform movements that have breathed new life into what has long been a moribund political environment. Yet amid the persistent upheaval, there are countries where change has not been embraced, where streets are calm, and where citizens seem quite content with the status quo.

While historic revolutions have convulsed Tunisia, Egypt, Syria, Yemen and Libya — reaching an apotheosis with the caged courtroom appearance of former Egyptian President Hosni Mubarak being rolled in on a hospital bed — Saudi Arabia, the United Arab Emirates, Qatar and Kuwait have served as oases of relative calm in a region associated of late with discord, strife and chaos.

The reasons why these four Arab states situated along the Persian Gulf are following a divergent political narrative, at least for now, are manifold and allow no simple explanation. Culture plays an important role. The Middle East often gets lumped into one category but there are many “Middle Easts” — the Maghreb, the Levant, the Gulf, and the latter has its own unique social structures (derived in part from its Bedouin past) that differentiate it from the others. Demographics are also a key factor. Qatar’s population is estimated at around 1.5 million (three-fourths of which are temporary foreign workers or expats), miniscule compared to Egypt, whose 80 million souls make it the world’s most populous Arab nation.

But petroleum has also proven to be a potent social adhesive. Massive reserves of oil and natural gas and the resulting high standard of living are also important contributors to the lack of unrest. Yet in truth, it is a delicate blending of all these factors (and more) that has allowed these sheikhdoms, emirates and kingdoms to rise above the strife currently upending the region.

The sun sets on the Dubai landscape, punctuated by the Burj Khalifa skyscraper, the world’s tallest building.

Of all the factors outlined above, none is more readily quantifiable than petroleum. While the term “oil-rich Gulf state” is a well-worn cliché, it is worth noting the extent to which this description holds true. Between Saudi Arabia, Kuwait and Abu Dhabi, three ruling families control more than a third of the world’s known oil reserves, while their citizens (or subjects) account for less than 1 percent of the global population.

Neighboring Qatar has the world’s third largest reserves of natural gas after Iran and Russia, and it is the world’s top exporter of liquefied natural gas. According to the Bloomberg news agency, Saudi Arabia exported around $215 billion worth of oil in 2010. In 2008, the GDP of Abu Dhabi — one of seven independent emirates that make up the UAE — hit $105 billion after their emirate pumped some 2.7 million barrels of oil a day at up to $147 per barrel when prices were at their peak. And just as in Qatar, these revenues are divided between a tiny native population of around 100,000. (About 90 percent of Abu Dhabi’s population is comprised of foreigners, primarily from South Asia and the Middle East.)

These vast reserves of oil and natural gas have allowed the Gulf states to provide a cradle-to-grave welfare state unimaginable a generation before, when the Arabian Peninsula was home to nomadic Bedouin tribes and a number of small sea ports dependent on the pearl diving trade. Qatar alone has the world’s highest per-capita GDP in terms of purchasing power parity, according to the International Monetary Fund, which estimates it to be over $100,000 in 2011. But in transitioning to 21st-century economies, these countries have retained a system of patronage practiced by earlier generations whereby loyalty is bought with lucre — creating a social compact whereby citizens trade political rights for patronage.

While petroleum wealth is often cited as the only reason behind the relative stability in the region, a quick look at other resource-rich nations reveals that oil and gas alone are not enough to ensure stability. Nigeria has large oil reserves but is burdened with a population of more than 150 million and a fractured political system lacking the cohesion of the Gulf Cooperation Council (GCC) states. Also, successive Nigerian governments have failed to provide the essential government services that set these Gulf states apart from other members of OPEC (Organization of the Petroleum Exporting Countries).

Be it a guaranteed government job, free housing, modern health care or schooling, citizens of the four aforementioned Gulf nations enjoy living standards other OPEC members such as Algeria, Angola, Ecuador, Iran, Iraq, Libya, Nigeria or Venezuela can only dream of. In Kuwait, there is no income tax, men receive an interest-free loan of $250,000 to buy a house upon getting married, food is subsidized by the state, and education (including university) is free. The only price is fealty to the Al Sabah family — rulers of the nation since the 18th century.

This unwritten social contract, like a marriage, is for better or worse (for richer or poorer has yet to be tested). The Emir of Kuwait Sheikh Sabah Al Ahmad Al Sabah gave every citizen 1,000 Kuwaiti dinars ($3,500) and free food rations for 14 months after complaints about rising food prices. In 2011, as protests erupted in neighboring Oman and Bahrain as part of the Arab Spring, King Abdullah of Saudi Arabia awarded each citizen two months’ extra pay — part of a $130 billion spending package to boost salaries, low-income housing, religious organizations and other initiatives — and the streets of Riyadh remained calm.

In contrast, another GCC nation, Bahrain, which has little energy riches to fall back on, was shaken by widespread demonstrations earlier this year that were quelled by Saudi-led troops trying to preserve stability in the kingdom’s backyard. The Bahraini uprising was led by disgruntled Shiites who represent about 70 percent of the population and resent the minority Sunni elite, which not only dominates the government but also tends to receive the bulk of the nation’s handouts.

Likewise, resource-poor Oman was jolted by isolated protests earlier this year as well, although they quickly fizzled out and Sultan Qaboos bin Said has been widely credited with transforming Oman from an economic backwater into a modern state over the last 40 years in power — all accomplished with only modest reserves of oil and gas.

While commentators in the West are quick to denounce energy-supplied acts of largesse as simple bribery, there is a sense in much of the Gulf that such access to the resources of the state has been “earned” as a result of people displaying loyalty to the ruling family. It’s a delicate bargain that both sides must maintain. Molly Williamson, a scholar at the Middle East Institute in Washington and a retired senior foreign policy advisor to the secretary of energy, believes that the ruling families are acutely aware of how to keep their end of the social contract. “There is great receptivity on the parts of these governments to meet the anxieties and concerns of their populations,” she said. “To not respond would be seen as egregious.”

But there is also a dark side to this social contract. In return for the economic benefits, people enjoy little or no real say in how their nations are governed. While this may have been acceptable in the past, the uprisings in Egypt and Tunisia have challenged conventional thinking about democratic aspirations in the Middle East. Moreover, even if democracy isn’t at the top of people’s wish list in the Gulf, other issues such as corruption, unemployment among young people, government bureaucracy and transparency could still fuel future unrest.

And citizens both expect and enjoy superior status (both de facto and de jure) in the eyes of the law compared to the vast numbers of expatriates who make up a large section of the labor market. Furthermore, many citizens or “locals” enjoy sinecures whereby showing up for work is their prime requirement, while all the real work gets done by foreigners, often on lower salaries.

Looking to the future, there is a nagging question that will not go away: Is this social contract sustainable after oil? Until recently, this was a decision that had been kicked down the road for the next generation to worry about. Estimating a nation’s oil reserves involves a lot of guesswork as most OPEC nations keep their reserves secret or inflated. Anyhow, advances in technology year by year also alter the picture by increasing the potential yield from each oil field.

Nevertheless, the Gulf states are well aware that they’ll eventually need to deal with the end of what is ultimately a finite resource. Kuwait and Abu Dhabi have created massive sovereign wealth funds to pay for whatever strategies will be enacted in the future.

Williamson of the Middle East Institute believes that the Gulf states have learned a lesson from the “boom and bust” of the 1970s and 1980s when oil soared during the Yom Kippur War and then sank below $20 a barrel. She believes they are now mindful of “the importance of taking some of those oil revenues and plowing them into the investment of the country and in particular the population.”

The UAE for one has aggressively moved to diversify its economy away from dwindling oil supplies, with Dubai leading the way in becoming a global (and glittery) financial, tourist and entertainment destination — though much of that emirate’s rags-to-riches transformation was financed by an abundance of cheap credit on global financial markets; Abu Dhabi financed the subsequent bailout after the 2008 crash.

But perhaps no other Gulf country has invested more in becoming a well-rounded, modern state than Qatar, which has spent significant resources on education, as seen by the sprawling Education City complex that has attracted outposts from some of the most prestigious universities in the United States, including Cornell Medical College and Georgetown University. Qatar will also host the FIFA World Cup in 2022, a huge coup for the small nation. And while some Republicans in the United States are fighting to save the incandescent light bulb (invented not in the last, but the previous century), Abu Dhabi is investing billions in renewable energy and green technology in its much-lauded (but as yet unproven) Masdar City sustainability project.

Given these still-evolving social and economic developments, political reform is likely to be put on the backburner. The current economic fragility of the West and the persistent political violence seizing the Middle East should only strengthen the “old order” across the region, as the ruling families from Riyadh to Doha can now point to the pain and uncertainty afflicting those who sought political liberalization.

Habiba Hamid, an editorial writer at the Abu Dhabi-based newspaper The National, believes the seismic changes that rocked Cairo and Tunis are unlikely to make waves in Riyadh and Doha.

“Most of the Arab Gulf is not at risk from upheaval, despite systemic challenges. The UAE for instance, has been responsive … and it’s very evidently a work in progress,” she said. “Regimes are still grappling with colonial hangovers of degradation, alongside the fast pace of globalization.”

By the same token, the rapid forces of globalization, from economic meltdown in Europe to climate change to any sudden drop in oil prices, could spark a breakdown in the Gulf’s coveted social contract. And looking above the horizon, it remains unclear if these states, blessed with natural riches, can ultimately weather the crosswinds of a new political climate sweeping the region.

Raymond Barrett, author of “Dubai Dreams: Inside the Kingdom of Bling,” is an Irish writer and journalist.