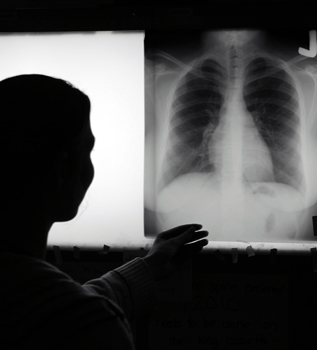 The lung is a touchy organ. When someone who has agreed to donate their organs passes away, one of the first things that the medical team does is evaluate the suitability of those organs for transplant — in other words, are they healthy enough to survive in another person? For an organ like the kidney, for example, the answer is yes about 60 percent to 65 percent of the time.

With lungs, however, only about 15 percent of them prove suitable for transplant. That’s one of the reasons why about 1,800 people with “end-stage” lung conditions ranging from chronic obstructive pulmonary disease to cystic fibrosis are currently on the waiting list to receive lung transplants, according to the United Network for Organ Sharing (UNOS). In 2010, 233 people died while on the waiting list for a donor lung.

But that may be changing soon, thanks to an extraordinary technology that is restoring lungs once thought too damaged to be used in transplants.

Called ex vivo lung perfusion, the technology was developed by surgeons at the University of Toronto. When a possible set of donor lungs is evaluated as “marginal” — not damaged beyond repair, but not strong enough to be automatically transplanted — the lungs are placed in a protective, transparent chamber that looks a lot like the glass-topped domes where bakeries display pastry wares.

For the next four to six hours, the precious lungs are connected to a circuit that filters in oxygen, nutrients and a special solution called STEEN to replenish their function. During that time, they are evaluated on key measures of lung function to help surgeons decide whether they can safely be transplanted.

Since the groundbreaking first successful transplant in Toronto in 2008, five U.S. centers have been testing the technology in a nationwide clinical trial called NOVEL (Normothermic Ex-Vivo Lung Perfusion as an Assessment of Extended/Marginal Donor Lungs) — including the University of Maryland, which performed the first such transplant in this country in September 2011.

At Columbia University Medical Center in New York, three of the eight sets of lungs first studied in the NOVEL trial proved to be suitable for transplant, and all three of the patients who received the donated lungs are doing very well, says Dr. Frank D’Ovidio, director of the Ex-Vivo Lung Perfusion Program and associate surgical director of the Lung Transplant Program at New York-Presbyterian Hospital/CUMC.

“That’s a very favorable result. Three lungs that would otherwise have been discarded are now keeping patients alive. If this technology increases donor availability even by just 10 percent, at a center like Columbia that does about 50 to 60 transplants a year, we’ve done five or six more transplants,” said D’Ovidio. “Over time we hope to increase that percentage even further.”

One person whose life has been changed by the trial is 56-year-old Patricia Kingsbury, of upstate New York. She had been on the waiting list for a lung at Columbia since early 2010, after a lifetime with asthma and a smoking habit that she desperately tried to kick without success.

In 1996, at the age of 46, a chest x-ray and a pulmonary function test showed that Kingsbury had severe chronic obstructive pulmonary disease (COPD), a combination of asthma and emphysema. For the next several years, Kingsbury tried different medication regimens, but she found that every respiratory infection triggered an exacerbation of her COPD. At work, she switched to a desk job and tried to hide her symptoms, but in 2000, with her lung function at 17 percent, she was forced to go on disability. “The bathroom was probably about 100 feet away from my office, and I could barely get there,” she recalled.

By 2007, although she had quit smoking for good in 2003, Kingsbury entered what seemed like an endless round of hospitalizations. After going on the transplant waiting list in 2010, she was called to the hospital for a possible transplant several times, only to learn after arriving there that the donor lungs weren’t viable. She ultimately ended up in a rehabilitation hospital and was then sent home to Albany to await a move to a nursing home.

“I was there one day when I got the call from Columbia,” she said.

She was actually second in line for the ex vivo lung, but the patient ahead of her decided to forego the experimental trial, so Kingsbury got a bonus: a double lung transplant rather than a single. A month later, she left the hospital.

“I don’t think I would have made it through another hospitalization and intubation,” she said. “Now, I’m amazed with what I can do. There’s so much that I haven’t done since I was 42. Now I can walk outside in front of my apartment. I’ve lived here for three years and had never walked on the sidewalk before! I’ve started taking my own garbage out and I volunteer to help my neighbors. I can go grocery shopping, I cook, clean, vacuum. I play with my grandchildren! I can do all the things I love to do.”

D’Ovidio says that as of early summer, the trial was about one-third of the way to completion. He’s not certain how long it might take for the Food and Drug Administration to approve the technology after the trial is over, but with results like Patricia Kingsbury’s, the outlook seems promising.

Canada has already had great success with a similar trial. “They tested 23 lungs ex vivo against 23 lungs that did not require the technology, and got equivalent results,” said D’Ovidio. Multiple centers throughout Europe have also been using the technique.