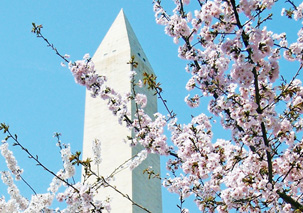 Although temperatures have been spring-like for months, officially the season is almost here, bringing the coveted annual National Cherry Blossom Festival with it — and this year’s popular pink extravaganza will really be bursting with pride.

That’s because 2012 marks the centennial of Tokyo Mayor Yukio Ozaki’s gift of 3,000 cherry trees to Washington. Running March 20 to April 27, the festival celebrates not only the enduring legacy of that gift, but Japanese culture as well. To that end, as the tiny pink blossoms flourish around the D.C. metro region, so too will various art exhibits and events commemorating their 100th bloom in our area. Here is a look at four of them:

Never before displayed outside Japan, Kano Kazunobu’s (1816-63) phantasmagoric paintings combine historical context with the religious beliefs of 19th-century Edo (modern-day Tokyo). On view from March 10 to July 8, “Masters of Mercy: Buddha’s Amazing Disciples” at the Arthur M. Sackler Gallery will display 56 of the 100 paintings in a series that depicts the lives and deeds of Buddha’s legendary 500 disciples. 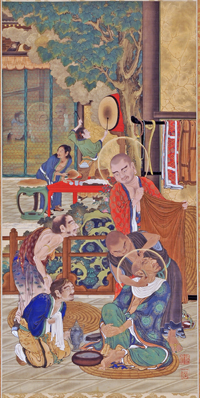 Commissioned by the Pure Land Buddhist temple Zōjōji, Kazunobu began the series in 1854 and completed it in 1863. That timeframe is important, said James T. Ulak, senior curator of Japanese art, because a number of critical events took place then — among them: Commodore Matthew Perry, on behalf of U.S. President Millard Fillmore, demands that Japan open its borders to trade; an earthquake wrecks Tokyo in 1855; a sequence of cholera plagues and typhoons strikes; and the government falls apart.

“The chaos of his real environment was incredible,” Ulak said. “There’s a painting where the Arhats [disciples] are rescuing people going down this torrential stream on the roofs of their houses — clearly a typhoon has hit. He’s seeing this. There’s a great immediacy and connection between this traditional vision and the politics and natural calamities of the day.”

Arhats represent the religious origin of the series. Based on a Buddhist cult following, the Arhats are 500 disciples of Buddha who look like humans but have super powers — “sort of X-Men zipping through the world saving things in the name of the Buddha, but also living lives like we live,” Ulak explained.

The result is larger-than-life paintings — standing four feet by 10 feet, including their silk mountings — that are dynamic and tabloid yet pious, according to Ulak. Kazunobu “takes a traditional iconography and really embellishes it with the feelings of the day,” he said.

The paintings, such as Scroll 22, show large, gnarly-yet-haloed men with long eyebrows battling evils such as fire-breathing dragons, while smaller, more earthly beings reach up in anguish for help. In another, the Arhats sit on clouds and lower ropes to villagers apparently drowning in a flood, a nod to the typhoons of the day. Other images, such as Scroll 50, are more peaceful, depicting the Arhats in repose among trees and moonlight.

The exhibition will display the scrolls in rotations of 13 pairs at a time, Ulak said.

A contemporary and neighbor of Kazunobu, Katsushika Hokusai (1760-1849) is one of Japan’s most famous artists, and his most acclaimed print series, “Hokusai: Thirty-six Views of Mount Fuji,” will be on display from March 24 through June 17 at the Sackler Gallery. It includes 46 images, including recognizable pieces such as “Beneath the Wave Off Kanagawa,” better known as “The Great Wave,” and “South Wind at Clear Dawn,” better known as “Red Fuji.” 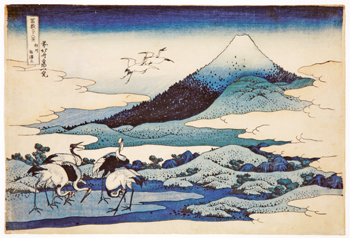 In honor of the cherry blossom centennial, the Arthur M. Sackler Gallery is presenting “Hokusai: Thirty-six Views of Mount Fuji” including the Katsushika Hokusai print “Umezawa Manor in Sagami Province.”

First published between 1830 and 1832 and designed by Hokusai when he was in his 70s, the series changed Japanese art and publishing with its innovative techniques and focus. “It is probably the most important landscape print series in the history of Japanese prints,” said Ann Yonemura, senior associate curator of Japanese art at the Sackler. “It was the first major series to focus entirely on landscape and not on actors and courtesans and warriors.”

She added: “For the anniversary of the gift of cherry trees to Washington, the 100th anniversary, we should focus on the artist who was the first major Japanese artist to be recognized in the West.”

The result is a collection of clear, vibrantly colored prints plus a rare version of “Red Fuji” dubbed “Pink Fuji” because of its paler coloration. It’s the earliest example of “Red Fuji” before it became a darker, deeper, richer red, Yonemura said.

Mount Fuji was worshipped in Edo, where Hokusai spent his life, and was considered to be sacred from very ancient times. “He was aspiring to understand nature and then to bring it to his paper through his brush,” Yonemura said.

Mount Fuji is present in each image, sometimes in the foreground and sometimes barely noticeable, a nod to Hokusai’s use of perspective. It’s also indicative of his imagination, Yonemura said, because scholars don’t think the artist visited all the places from which he painted the mountain.

Some of the prints depict tranquil and serene views, while others are harsher, such as one showing laboring lumberyard workers. Others, like “The Great Wave,” capture the force of nature, as a wall of water seems to jump off the print.

“You’re actually looking upward almost as if you’re in the water with the fisherman whose boats are being towered over by this wave,” Yonemura said. Hokusai “does wonderful things to create an empathetic view where you’re having the same experience.”

Hokusai produced his prints by first creating a detailed drawing using a fine brush and ink on very thin paper. The final version went to the publishing house, where an expert block carver would carve the cherry wood block and send the image through an assembly line-like hand-printing process. It began by printing the lines and then moving the paper to color blocks.

“One of the wonderful experiences is going to be to take time to savor Hokusai’s enormous understanding both of nature and of imagination,” Yonemura said.

Tied to the Sackler exhibits in that the three shows represent a unique opportunity to see entire series by three influential Japanese artists, “Colorful Realm of Living Beings” is a 30-scroll set of paintings by Itō Jakuchū on loan from the Imperial Household and presented in its entirety for the first time in the United States. 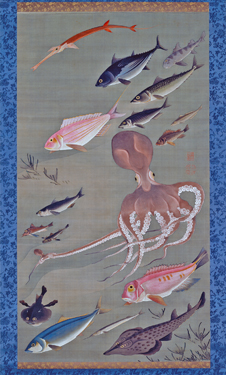 Itō Jakuchū’s “Fish,” from a set of 30 vertical hanging scrolls, will be on display for only four weeks at the National Gallery of Art.

This set of bird-and-flower paintings on silk offers a panoramic pictorial survey of flora and fauna, both mythical and actual, and will only be on display for four weeks because the scrolls are so fragile.

The show also reunites the scrolls with Jakuchū’s triptych of the Buddha Śākyamuni from the Zen monastery Shōkokuji in Kyoto — marking only the second time the triptych has been shown alongside the scrolls since 1889. Jakuchū had donated both works to the monastery, which displayed them in a large temple room only during Buddhist rituals. When the scrolls were given to the imperial family, the triptych remained at the monastery.

“It’s important that they be reunited because this helps to explain the original context for the scrolls,” said guest curator Yukio Lippit, a professor of art history and architecture at Harvard University. “When you look at the work, it’s clear that he’s depicting a kind of summons where fish and animals and all kinds of creatures of the world are gathering to one spot to be the audience for the teaching of the Buddha. This really underscores the religious context of the paintings.”

One of the most virtuosic scrolls in the set is one of two pieces titled “Fish.” It’s a motley collection of freshwater and ocean fish, including the famed blowfish and an octopus, that would never be seen together in nature. Instead, Jakuchū draws from his experiences seeing such creatures as a green grocer in Kyoto.

“When you look at this up close, you really see how the texture of the fish scales [and the] glistening, gelatinous quality of the details of the skin of the fish are captured in different ways — somehow glistening but also somehow muted as if floating in water,” Lippit said.

This effect is caused by Jakuchū’s use of mixing and matching pigments and painting on the back and front of the silk panels to take advantage of their porosity in achieving coloristic effects.

The exhibition of the scrolls in D.C. is a celebration not only of the centennial cherry blossom festival but also of the ties between the United States and Japan, said Ichiro Fujisaki, ambassador of Japan, in exhibit materials. “We were so grateful for America’s show of solidarity and support after the multiple disasters that struck Japan in March 2011,” he said. “If this collection were to be shown anywhere in the world outside of Japan for the first time, where else would it go but the United States?”

Like many area hotels, the Willard InterContinental Washington will be offering special festival-related deals, such as the Very Cherry Blossom Package for two ($449), including a picnic basket lunch and Old Town Trolley tour tickets; the Cherry Blossom Afternoon Tea ($39 or $49 with an alcoholic beverage); and daily prix fixe menus fusing French, Japanese and cherry foods in the Michelin-rated Café du Parc. 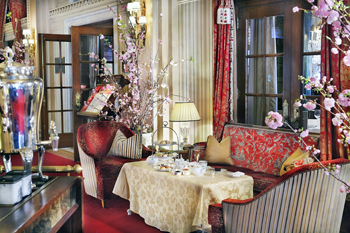 The Willard InterContinental Washington is offering a Cherry Blossom Afternoon Tea in its Peacock Alley to celebrate the National Cherry Blossom Festival.

But the Willard has a special connection to Japan and will pay homage to that history by displaying local artists’ work.

The first delegation from Japan to visit the United States stayed at the Willard in 1860. The group of three ambassadors and their retinue of 74 came to sign the nations’ first trade and amity treaties.

“The beauty of this trip was that it was documented quite a bit by the media at the time,” said Barbara Bahny-David, spokeswoman for the hotel. “There are a lot of sketches of these cultural exchanges” in the history gallery. One shows a group seeing a sewing machine for the first time as they watched a Willard seamstress.

This year, live cherry blossoms will be accompanied by Ikebana arrangements from the D.C. Chapter 1 Ikebana International. Ikebana is the traditional art of flower arranging whose roots can be traced to the introduction of Buddhism to Japan in the sixth century, according to the organization. More than 2,000 schools of Ikebana exist. Four of them will be represented in the works to be showcased at the hotel.

A display of lifelike Japanese dolls made by Akiko Keene, founder of the Washington Japanese Dolls & Crafts School, will also be showcased and available for purchase.

from March 30 to April 29
National Gallery of Art
located on the National Mall between 3rd and 9th Streets at Constitution Avenue, NW
For more information, please call (202) 737-4215 or visit www.nga.gov.