Home The Washington Diplomat March 2012 Two of D.C.’s Most Established Neighborhoods Also Its Most Eclectic 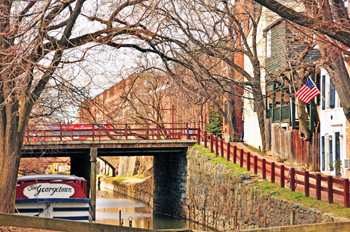 Two of Washington’s most iconic, distinctive neighborhoods also couldn’t be any more different from one another, though they share an enduring appeal that continues to evolve and redefine D.C living.

On one side, couples browse posh furniture boutiques for antiques or stroll along canal paths on lazy Saturday afternoons. Several blocks — and a world — away, thumping dive bars and immigrant-owned eateries attract hipsters on raucous Saturday nights. But these scenes only speak to one side of these multifaceted, well-established yet surprisingly eclectic neighborhoods.

A woman in a fur coat, holding a Yorkshire terrier in one hand, and a large, ornate picture frame in the other, stands frozen on a Georgetown street corner, wondering how to answer her ringing mobile. Around the corner on Wisconsin Avenue, a young woman steps out of an Audi SUV to scrutinize some “totally real” Prada purses, sold by an African immigrant for the very unreal price of $20. And just south of M Street, a French-speaking couple shares a $4 chai tea latte cupcake, as a line of people waiting for the chance to buy handmade goodies at Baked and Wired stretches out the door.

These are scenes from a Saturday afternoon in Georgetown, a neighborhood that is older than the city to which it belongs. Founded as a tobacco port by two not-so-humble merchants named George in 1751, nearly four decades before Washington became the nation’s capital, Georgetown has long had its own identity.

The town grew up around a tobacco warehouse on the Potomac River and by the late 18th century was one of the leading seaports on the East Coast. George Washington and Pierre Charles L’Enfant, the French-born architect who was commissioned to design the capital, are said to have discussed plans to convince farmers on the other side of Rock Creek to sell their land over drinks at Suter’s Tavern, near what is now the intersection of K and 31st Streets.

“Georgetown was an independent town, completely surrounded by the federal city, until they were finally annexed in 1871,” said Ronald Johnson, a history professor at Georgetown University who has taught courses on the history of Washington and Georgetown. “They fought to keep their autonomy but by that point Georgetown was already in decline.”

Johnson says that Georgetown’s golden age stretched from about 1790 to 1830. If you take a short, but steep walk north of M Street along P and N Streets, you’ll see some of the stately “federal” style homes, named after the Federalist political party that were built during this time period. 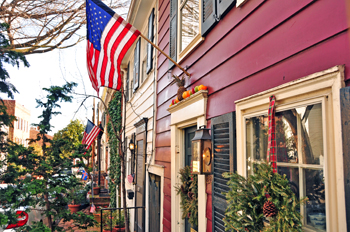 Georgetown’s charming cobblestone streets and federal-style architecture don’t come cheap: There are currently 41 homes up for sale in the historic neighborhood priced at $2 million or more.

Prior to the Civil War, Georgetown had a substantial population of free blacks and slaves, and by 1900, it was about 40 percent African American, with pockets of poverty around small islands of prosperity. Gentrification of the neighborhood arrived, oddly enough, during the Great Depression.

“The federal government grew so fast during this period that there was such a shortage of homes,” Johnson said. “Government workers moved into homes in Georgetown and other areas, and displaced a lot of the impoverished black residents.”

Georgetown has long been home to the city’s elite. Thomas Jefferson is said to have lived there for a spell; Ulysses S. Grant kept a summer home on Reservoir Road, and John F. Kennedy lived in the neighborhood for years prior to becoming president. Walk over to 3307 N Street and you can see the stately red-brick home where JFK announced many of his cabinet appointments after his election in 1960. In fact, in just a short walk you can check out the exterior of many of the Georgetown homes that JFK and Jackie Kennedy lived in (for a complete list of the addresses and ideas for Georgetown walking tours visit: www.georgetowndc.com/explore/georgetown_history/).

With its distinctive architecture and proximity to downtown, the neighborhood’s charms and cachet don’t come cheap. There are currently 41 Georgetown homes for sale priced at $2 million or more, with the priciest being a seven-bedroom, 10-bath estate on Foxhall Road priced to move at $11.9 million. Last summer, Ryuji Ueno and Sachiko Kuno, the founders of Sucampo Pharmaceuticals, paid $22 million for Evermay, a circa 1794 estate built at what is now 1623 28th Street by Samuel Davidson, a Scot who got rich by selling the land around what is today the White House to the federal government. You can catch a glimpse of the mansion by visiting the site, but its high walls afford just a preview of its grandeur. (Ueno and Kuno, married biotech entrepreneurs, also later purchased nearby Halcyon House for $11 million, making them a quiet but forceful new presence in Georgetown.)

Visitors will notice plenty of Range Rovers and men in expensive-looking blazers in Georgetown, but you certainly don’t need to be a millionaire to enjoy this leafy, expansive corner of D.C. Start at the new Georgetown Waterfront Park, along the Potomac, and then work your way north, stopping for a walk along the C&O Canal path, before heading uphill to enjoy the quiet splendor of cobblestone residential streets like N, P and O.

Amidst the multimillion-dollar row houses, you’ll also notice some apartment buildings and homes in states of gradual decay. The neighborhood is also home to a large student population, thanks to the presence of Georgetown University, a Jesuit institution of learning founded in 1789. Stroll the neatly manicured grounds and be sure not to miss the Gothic-inspired Healy Hall and the Old North building, which was completed in 1872.

The university’s distinguished alumni include King Abdullah II of Jordan, the current heads of state in Lithuania, Bosnia and Costa Rica, as well as former President Bill Clinton, who attended the school’s highly regarded Edmund A. Walsh School of Foreign Service, a training ground for future diplomats and government leaders. (Clinton ran for student body president as a junior but lost the election.)

If you want to have a drink at what is said to have been Clinton’s favorite watering hole during his student days, stop in at The Tombs, on 36th Street just adjacent to the campus. Espionage buffs might want to raise a glass at Chadwicks, the low-key K Street hangout where CIA mole Aldrich Ames once handed over shopping bags full of secrets to his KGB handlers.

Georgetown has also long been a magnet for shoppers, though critics argue that high rents have forced out small businesses at the expense of national chains. But James Bracco, executive director of the Georgetown Business Improvement District, rejects the notion that Georgetown has become a soulless outdoor shopping mall.

“The reality is that M Street has the highest foot traffic and the highest rents, but look around the rest of the neighborhood and you’ll see that only 25 to 30 percent of our stores are chains; the rest are small, boutique, independent operators,” he said.

Two of those are the neighborhood’s most reviewed businesses on Yelp, a popular user review site, and both are cupcake related: Georgetown Cupcake has a whopping 1,061 reviews, while Baked and Wired has 775. The two sisters who founded Georgetown Cupcake now even have their own show on TLC called DC Cupcakes, for those who aren’t content to simply eat cupcakes and want to watch them on TV too.

The humble, thoroughly perplexing blue awning at the intersection of Florida Avenue and 18th Street tells the story of Adams Morgan, one of Washington’s most distinctive neighborhoods. It says: “Middle Eastern & East African Cuisine,” and also “Pizzeria Trattoria,” and above that the faded words “El Khartoum Restaurant.” And that’s Adams Morgan in a nutshell: an immigrant enclave that is rapidly gentrifying, its identity evolving by the day. 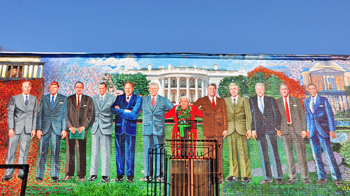 Eye-catching murals, bohemian cafés and a bustling nightlife have turned the immigrant enclave of Adams Morgan into one of the most popular neighborhoods in D.C.

After you’ve gorged on Georgetown’s history and cupcakes, make your way east across Rock Creek Park and spend some time visiting some of the city’s stunning embassies on Massachusetts Avenue, before cutting through the lovely Kalorama Heights residential district (site of the French ambassador’s palatial residence) and into Adams Morgan, a neighborhood whose very name evokes diversity. A 1950s Supreme Court decision mandated desegregation in the D.C. public school system and the neighborhood forged its name from the merger of Adams, an all-white school, and Morgan, an all-black one.

“Adams Morgan started to evolve into what it is today in the ’50s,” said Johnson. “Everything started to change in Washington in the ’50s and then the Civil Rights movement came, the Vietnam War, the Kennedy assassinations. Blacks moved into the city and then immigrants followed into neighborhoods like Adams Morgan, and there was a movement of whites out to the suburbs.” 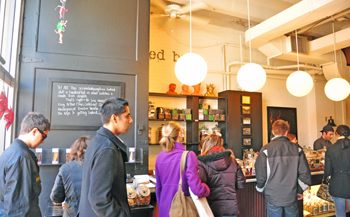 But in the late 1990s, the trend began to reverse and Adams Morgan has been slowly gentrifying ever since. The main thoroughfare, 18th Street is currently under construction until May, but the area is still a dining and nightlife hub for area 20- and 30-somethings, and a drive down the strip on a Saturday night, especially in the summertime, is a symphony of blaring car stereos, all base and sidelong glances.

Take a jaunt up 16th Street to admire more stately embassies and some lovely old-world apartment buildings. Then, go from the upscale to the down-home by heading over to Madam’s Organ, an old school bar and local landmark, for a drink and some live music (the mural of the red-headed, big-busted Madam is hard to miss) or check out Tryst, a coffeehouse/bar/lounge that features a terrific selection of beers on tap and some first-rate coffee.

Adams Morgan doesn’t have as many Ethiopian restaurants as it once did, but there are still some standouts. Try Mama Ayesha’s, and be sure to check out the colorful mural of Mama with likenesses of several U.S. presidents from Obama through Eisenhower. Amsterdam Falafelshop and Julia’s Empanadas are budget favorites on the dining front, while Cashion’s Eat Place and Perrys are good choices on the fine dining front.

Bill Duggan opened Madam’s Organ in the neighborhood 20 years ago, and says that the essence of this thriving hotspot hasn’t changed.

Duggan believes that a visit to Adams Morgan is like one-stop-shopping for those who want to understand D.C.

“You can come to one neighborhood and see the world,” he said. “With music, for example, you can hear American music, jazz, blues, bluegrass, Latin, and you can cross the street and hear African music, or go next door and hear Brazilian. Come into one neighborhood, walk up and down the street, and you get a taste of America and a taste of what Washington has become.”

Dave Seminara is an award-winning freelance photojournalist and former diplomat based in Northern Virginia.