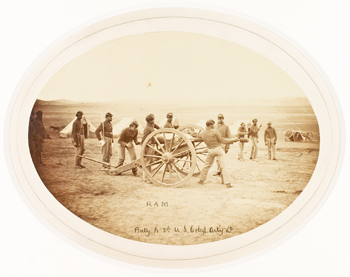 They are worlds apart, separated by time and space — one a distinct but distant relic of history, the other more immediate, but still somehow very far away.

Yet here they are together at the Corcoran Gallery of Art, in two rooms, not even separated by a wall. Brothers in arms from different eras locked in a universal struggle that spans the ages. Whether their tools were gunpowder or laser-guided missiles, these warriors from the past and present are connected by combat and the cries of war, both real or imagined.

The Civil War was one of the first conflicts to be extensively documented by photography, as seen in pictures such as “Ram,” part of the “Shadows of War” exhibit at the Corcoran Gallery of Art.

It’s of course possible to separate “Shadows of History: Photographs of the Civil War from the Collection of Julia J. Norrell” from “Tim Hetherington: Sleeping Soldiers,” in spite of their proximity. The two concurrent exhibitions couldn’t be more different in how they look, how they were put together, and the kind of impressions they leave behind.

The Civil War portraits, coming on the heels of the 150th anniversary of that epic conflict, look almost fictional, so removed in time and style from Tim Hetherington’s vibrant photographs and video installation, which looks like something we regularly encounter on the evening news.

But all of the images show a nation at war and the common bonds of conflict, as men fight for their lives while also struggling through the strange idiosyncrasies of everyday life at war.

The dual nature of the exhibits is even more poignant given that the photographs from the Norrell collection — which include early tintype, ambrotype and cartes-de-visite portraits, as well as rare images of African American regiments — are among the first to extensively document the American Civil War, offering a visual essay that ranged from portraits of soldiers and officers at rest, to the death and destruction of battle.

The Civil War would hardly be the last conflict to engulf Americans, and today we see a slice of what life is like for soldiers fighting and toiling their way through a remote and dangerous outpost in Afghanistan, where Hetherington was embedded with a U.S. Army team from 2007 to 2008.

The Civil War exhibit features 36 photographs by some of the most prominent photographers of the day, including George Barnard, Matthew Brady, Alexander Gardner and Timothy H. O’Sullivan, culled from the Washington collection of Julia “Judy” Norrell, herself a Southerner by way of Arkansas. The exhibition also includes a powerful stand-alone installation by contemporary African American artist Whitfield Lovell: a large, life-size construction of a black Union soldier.

The Hetherington exhibition has fewer works, but also includes an installation: a short, continually rolling video with hyper sounds that include the screams of soldiers and the always-jolting rattle of automatic weapons — the type that would have done catastrophic damage at the bridge at Antietam.

You think thoughts like these going back and forth between the two exhibitions. “Shadows of History” is as quiet as a graveyard or ruin, and in fact includes shots of graves, ruins and scarred landscapes such as battlefields and military encampments. You could say that the work of Hetherington, an award-winning British-American photojournalist, writer and filmmaker, is also about encampment — his being called Outpost Restrepo in the Korengal Valley, where he deployed with a group of Army soldiers from the 173rd Airborne Brigade Combat Team. 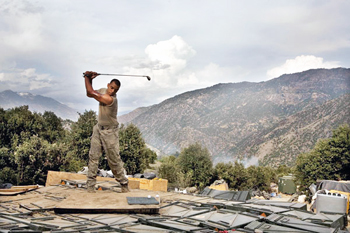 Sterling Jones practices his golf swing while at the main Korengal Outpost (KOP) firebase in Afghanistan’s Korengal Valley. Soldiers spend about two weeks at the Restrepo outpost before coming back to the main KOP base, where they can get a hot shower and call their family as chronicled by late photographer Tim Hetherington.

From billowing tents and bloodied farmland in Virginia to the craggy mountain-topped vertical spaces of Afghanistan, the places may be very different, but their function is the same: serving as a backdrop for fierce combat, bored repose and as a “home” where soldiers sleep between fearful waking hours.

Hetherington’s photographs indeed feature soldiers sleeping, as well as one swinging a golf club and men gathering behind their heavy weaponry, bare-headed and buff, sometimes smiling and other times tense. The photos are by nature more precise and focused on a particular place and time, with an edgy immediacy that Hetherington seems to share with his subjects, since his life too was in danger.

The “Shadows of History” photographs are just that: shadows and ghosts. The technology of that time did not permit “action” photos, so re-enactments were left to the heated imaginations of artists like Winslow Homer or newspaper illustrators. But we can view the aftermath of battle, fields littered with bodies and death. These images have their place in history and serve as a reminder of the journey this nation took, and what it once looked like, as blown-up homes and stark edifices (quite a few here) exist in a vacuum of silence and immobility.

But an odd thing happens when you walk into the “Shadows” exhibition. The noises from modern-day Afghanistan — the voices of soldiers and loud pop of their weapons — energize the Civil War room. The echo of gunfire lets you imagine the roar of cannons from the 1860s, the bellowing of horses, the terrified screams of soldiers in imminent danger.

It’s then you realize that these two exhibitions are painful twins, kindred spirits and complementary shadows of the experience of war.

The saddest footnote that speaks to war’s merciless brutality is the death of Tim Hetherington, whose Afghan video footage was featured in the Oscar-nominated documentary “Restrepo.” Hetherington, 40, was drawn to documenting conflict, chronicling the violent power struggle in Liberia, Sudan and other hotspots. Four years after arriving in Afghanistan, he went to Misurata to cover the fighting in Libya, where he was killed by mortar shells on April 20, 2011.

Shadows of History: Photographs of the Civil War
from the Collection of Julia J. Norrell