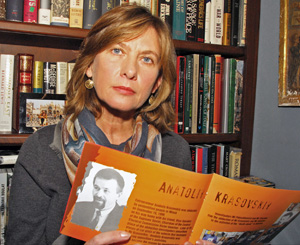 That evening, the prominent businessman was driving his Jeep Cherokee down Minsk’s Fabrichnaya Street with his close friend Viktor Gonchar, a leading member of the opposition, chairman of the Belarus electoral committee and candidate for president.

Suddenly, one vehicle blocked their path and another one pulled up from behind, forcing the Jeep to stop. Armed thugs jumped out, smashed the vehicle’s windows and dragged Krasovsky and Gonchar away. Neither were ever seen again.

But Krasovskaya has no illusions about that night. She’s convinced the murders of both men were personally ordered by President Alexander Lukashenko, who’s ruled Belarus since 1994 and is considered Europe’s last dictator (see main story).

“When my husband disappeared, I didn’t know what to do. I didn’t even understand what was going on,” she told The Washington Diplomat. “I began knocking on every door. Finally, I understood that only the international community could help me, because there is no justice in Belarus.”

Her daughter Valeriya recently wrote about the horrifying ordeal for the European magazine Indigo.

Irina Krasovskaya holds up a picture of her husband Anatoly Krasovsky, who was last seen alive in 1999 with his close friend Viktor Gonchar, a leading figure of the opposition in Belarus. Krasovskaya says the murders of both men were personally ordered by President Alexander Lukashenko, who’s ruled Belarus since 1994.

“I remember the night my father did not come home as if it was yesterday. I woke up at 4 a.m. and saw my mother in the kitchen. I asked her what happened and whether Dad had come home, and she said that his and Viktor’s mobile phones were off. She told me to go back to bed and that everything would be alright. It hasn’t been alright ever since.”

Krasovskaya says that “if Gonchar hadn’t disappeared, I’m sure he would have been the next president of Belarus,” explaining that her husband was helping to bankroll Gonchar’s political campaign at the time of their deaths.

“The Belarusian KGB began to investigate what happened. They almost found out the truth and arrested the guy responsible for kidnapping them. But then the president gave an order to release this guy and dismiss the general who was heading the KGB,” according to Krasovskaya.

The murder and its subsequent cover-up sounds like a scene straight out of “Gorky Park,” the 1981 bestseller by Martin Cruz Smith — except that this isn’t a detective novel. Rather, it’s a chilling reminder of what can happen, even today, to those who defy the Lukashenko dictatorship.

“Nobody imagined the regime could be so brutal,” Krasovskaya said. “I expected they might destroy his business or put him in prison. But I never thought they would kill people.”

Krasovskaya, 52, was interviewed in the living room of her comfortable home in Washington’s historic Cleveland Park neighborhood, surrounded by books and rare 17th-century maps of Eastern Europe.

Growing up under communism, Krasovskaya said she rejoiced when the Soviet Union finally fell apart and Belarus became an independent nation.

“It was like a breath of fresh air. We thought we’d have a better life and be free to travel, visit the rest of Europe, have education and democracy. We had so much hope,” she recalled. “But then Lukashenko came to power. I thought it was a kind of joke. He looked like a clown. He couldn’t speak intelligently. All his speeches were so stupid.”

Then a professor of child psychology at the country’s leading university, Krasovskaya had already been married 24 years to her husband, who was 47 at the time of his disappearance.

“There is a videotape of the killing, but the authorities will never allow this case to be investigated to the end because they themselves did it. Even the official investigator told me that,” she charged, adding that “we had a leak from Russia about what really happened. So we knew who organized it and who gave the order.”

In 2002, Krasovskaya and her friend, Svetlana Zavadskaya — wife of journalist Dmitry Zavadsky, who had been abducted two years earlier — founded We Remember, an independent yet unabashedly right-wing foundation whose mission, according to its website, is to “disseminate truthful information about politically motivated disappearances of Belarusian citizens and inform the world community about the situation in Belarus.”

In October 2004, following the issuance of a scathing report by the Council of Europe on human rights abuses in her country, the Belarus Democracy Act was unanimously approved by Congress and signed into law by President George W. Bush. That law authorizes U.S. assistance for political parties, NGOs and independent media that promote democracy and human rights in Belarus.

In fact, Krasovskaya met three times with Bush during his presidency and twice with former Secretary of State Condoleezza Rice. On Jan. 6 of this year, she also met Rice’s successor, Hillary Clinton, to press the White House to get tough on the Lukashenko regime.

“A delegation of five people from the Belarusian Diaspora talked with Secretary Clinton for almost an hour,” she told The Diplomat. “I have the impression they listened to us and have some feeling of what’s going on in Belarus.”

It certainly helps to have connections in high places. Ten years ago, Krasovskaya met longtime Republican Party operative Bruce Jackson at a human rights conference in Washington, where he was hosting a dinner for the Belarus delegation. A romance blossomed, and the couple married four years later.

Jackson, a former military intelligence officer and top executive at Lockheed Martin, is president of the nonprofit Project on Transitional Democracies.

An outspoken proponent of NATO expansion into Eastern Europe, he’s perhaps best known for his role in founding the now-defunct Committee for the Liberation of Iraq — a neoconservative advocacy group that helped build public support for invading Iraq after the 9/11 attacks.

Jackson serves on the board of his wife’s foundation, which in the beginning focused only on Belarus but is now part of a nonprofit coalition of NGOs that investigate political disappearances all over the world. As such, Krasovskaya has traveled to the Philippines, Thailand and Argentina promoting her cause, with generous assistance from the French government.

Krasovskaya also returned to her native Belarus in December and nearly got herself arrested the night of Dec. 19, when the regime rounded up 600 people in the main square of Minsk who were protesting the results of the widely discredited election that extended Lukashenko’s rule by another five years.

“People on the edge of the square were beaten, but I was in the middle with my friends, and we were squeezed together. There were more people than police. They didn’t have enough forces to arrest everybody,” she recalled. “I was lucky, but most of my friends were arrested. We still have three opposition candidates still in prison.”

The government claimed Lukashenko won the election with 79.6 percent of the vote, though Krasovskaya doubts he got even 40 percent, and certainly no more than that.

“This election wasn’t recognized by the OSCE [Organization for Security and Cooperation in Europe], which means Lukashenko has no legitimacy,” she complained. “The problem is, civil society may not participate in the vote-counting. Nobody’s allowed to go into the room where the voting is going on, so you can manipulate the results however you want.”

Among the demands being made by Krasovskaya and the protesters: the unconditional release of all political prisoners and new elections under international supervision.

But not all Belarusians are unhappy with the status quo. The nation enjoys a relatively high standard of living, with the least income disparity between rich and poor of any of the 15 former Soviet republics. Per-capita income is at least 50 percent higher than in neighboring Ukraine.

Krasovskaya discounts those accomplishments as mere window-dressing, however.

“Lukashenko’s supporters are mostly pensioners or rural people who don’t have education. They have never been abroad,” she sneered, estimating that such people constitute one-third of the country’s population. “As long as they have a salary and a little something to eat, they’re fine. And they trust whatever he says.”

Asked if there’s any parallels between anti-government protests in Minsk’s Independence Square and the recent crowds in Cairo’s Tahrir Square screaming for the overthrow of Egyptian President Hosni Mubarak — who had been in power for three decades — Krasovskaya said the young people of Belarus will absolutely not tolerate Lukashenko for another 14 years. She added that the European Union’s prior policy of “constructive engagement” with repressive regimes like Belarus simply doesn’t work.

“Previously, Poland was behind this engagement program. They thought it would pull Belarus away from Russia. But I personally warned them about Lukashenko. I’m sure he’s in charge of killing my first husband. He was always a bloody dictator and you will never change him.”