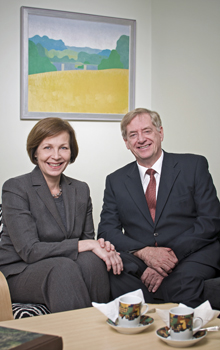 “The other night, we were singing happy birthday in Finnish and Dutch to Elsa, our 17-year-old younger daughter who’s doing her International Baccalaureate here at Washington International School. We were on Skype with her older sister, 25-year-old Emma, who is doing her medical internship at the prestigious medical school at the Leiden University. We were singing in Finnish and Dutch and then a friend called in to join us from Germany, singing to her in German!

“Skype makes all this possible to stay in touch with your friends and family, Facebook too,” Ronde continued. “All the modern social media gives the solution of making the world a smaller place for diplomatic families and other family members and friends who live all over the globe.”

As much as times have changed, however, the fundamentals of hard work and study are as important as ever to this highly educated diplomatic couple.

In Washington, Ronde says, “I’m the only one on the homework team. It’s not so easy to teach your own children. However, when they finish their IB, they are so well trained they can go straight from IB to medical or law school.”

The children certainly have a well-qualified teacher. Ronde earned a Ph.D. in solid state chemistry from Utrecht University in the Netherlands. To a layman, his CV reads like an index of the outer fringes of science: theoretical chemistry, chemical physics, upstream energy, reservoir engineering, coal gasification, enhanced oil recovery and fuel cell modeling, among other specialties.

His wife, who holds a master’s degree in history from the University of Tampere in Finland, has worked in the Ministry of Foreign Affairs for nearly 30 years.

Throughout their two careers, he has at times worked away from his wife and other times found opportunities to be in the same city. Today, Ronde is working in Washington as a director for the 70-year-old VTT Technical Research Centre of Finland, which offers high-end technological solutions and innovation services to improve its clients’ competitiveness.

“I am assisting in establishing the East Coast business plan that will focus on bio economics…. You can call me the East Coast scout,” he explained, noting that the center has rented space from the Finnish Embassy.

“We have 3,000 academics involved in the Helsinki area to work in bio-tech, energy and pulp and paper with digital information systems. In addition to paper, the forest industry can create high-tech, added-value wood products as performance chemicals based on lignocellulose [plant dry matter]. This is a new era for innovative uses. After all, Finland is covered with forests, about 80 percent of the land, and with good management, the amount of wood even increases.”

VTT, a nonprofit, is the largest multi-technological-applied research organization in Northern Europe, with centers all over the world, including California, Brazil, South Korea, China, Japan, Russia and Belgium.

This research is part of “Team Finland,” a government initiative that brings various organizations together to promote Finland’s economic relations and its national brand.

Ronde started working at VTT in 1994, traveling to Vietnam to consult on energy efficiency and energy auditing. “In Vietnam, I also coordinated the European Union’s demonstration, project ENERFISH, which produced biodiesel from fish waste. Combining our careers at that time was sometimes quite challenging.”

Another time was when he was a docent at the Delft University of Technology, the largest and oldest public technical university in the Netherlands, where Ronde studied enhanced oil recovery for another EU project. At a different point in their careers, he studied the Baltic Sea and then traveled to Kenya for the United Nations Environmental Program and the Global Environmental Monitoring System.

Ronde gave a lecture in D.C. in 1992 at the Washington Convention Center and his wife made several business trips to New York, but otherwise Washington is fairly new to the couple. In addition to his work with VTT, Ronde does his best as a diplomatic spouse (and one of only about two dozen ambassadorial husbands in town) to participate in functions and clubs when he can. 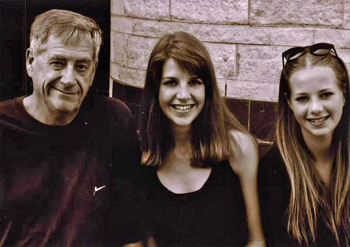 Prior to coming to Washington in 2011, Koukku-Ronde was undersecretary of state at the Ministry of Foreign Affairs, where she also served as director-general of the Department for Development Policy and deputy director-general of the European Affairs Department. Before that period in Helsinki, she was deputy chief of mission at the Finnish Embassies in Germany, The Hague and Kenya.

She began her Foreign Service career in the Press and Culture Section of the Foreign Affairs Ministry in 1985 after working as a freelance writer. She financed her university studies in part through her writing, helping out at the Finnish Embassy in The Hague as an archivist and secretary to the ambassador.

“We always laugh that she began in The Hague as secretary to the ambassador. Then, she went to diplomacy school. So she began as a secretary and ended up as the undersecretary,” Ronde joked, showing a hardy sense of humor.

Ronde, in fact, has been by his wife’s side practically since the start of her career. They met 33 years ago. “I was traveling with a buddy on holiday in Finland. We went to a restaurant where they had dancing. And, she was there. I asked her to dance and to dinner,” he recalled with a wide smile. “I was 29 and she was 23.”

“I had taken a break from work,” he said. “We were about 100 kilometers, or 62 miles, north of Helsinki in Lahti. I was just about to start at Delft,” which was about an hour’s commute from Amsterdam.

“I had a normal holiday — four weeks — and we had a good time. After that, we wrote a lot to each other and finally she decided she could finish her master’s thesis in Amsterdam.”

At the time, she was also freelance writing. “I remember one story she was supposed to do on the Greenpeace boat. But that didn’t work out so well. She got terribly seasick. But, she did write the story anyway!”

Although their professional lives keep them busy, the couple shares a love of nature. In Washington, they enjoy weekend walks that start from their Woodland-Normanstone neighborhood bordering Rock Creek Park and end up at the Phillips Collection or Corcoran Gallery, two private art galleries in Northwest Washington. Of course, all year long they use the official residence’s modern outdoor wood-and-glass sauna that sits out by the pool and is big enough for the whole family and several guests. The Finnish Embassy is also home to a large sauna and shower — still the only embassy in town able to practice “sauna diplomacy.”

The Finns have brought over other national traditions to Washington as well. Their embassy, located across the street from the U.S. vice president’s residence, stands as a symbol of Finnish contemporary design and the country’s devotion to the environment. The striking glass structure effortlessly blends into the surrounding woods and was the first embassy in town to “go green,” earning the U.S. Green Building Council’s Leadership in Energy and Environmental Design (LEED) recognition.

Meanwhile, the residence, built between 1915 and 1919, has undergone extensive renovations over the years. The latest is the redecorating of the main rooms with pieces by some of Finland’s most famous designers, including Eero Saarinen (renowned for his womb and organic chairs), Alvar Aalto and many younger Finnish designers like Tapio Anttila. The new interior plan has been created by architectural and interior design group Protest Design Oy and guided by the Foreign Ministry’s interior architect, Pauliina Jurmu.

Meanwhile, canvases on loan from the Finnish National Gallery’s most famous artists set the scene. Among the most recognized signatures are Eero Jårnefelt, Magnus Enckell, Albert Edelfelt and Caspar Wrede.

Shortly after meeting his future wife, Ronde learned Finnish and Koukku-Ronde learned Dutch. The whole family is now bilingual, though Ronde does admit that “Finnish is an enormously difficult language to learn.”

When asked about the differences between Finland and his native Netherlands, he said that beyond the languages, he finds “people are the same — I don’t see the differences. We all need shelter, food and I find that people from both countries laugh about the same things.”

However, he especially appreciates the Finnish “ritual” of going to the family cabin at the lake for one month each summer, an experience he describes as “so peaceful” (even though he says he’s the only one in the family who can never seem to catch a fish, big or small).

“It is no Disneyland,” he said of their remote lakeside cabin. “We have to cut the wood for the fire and sauna and try to catch the fish. And there are always other things to do for the cabin so it ends up being a working vacation. Still, it is so relaxing and so beautiful.”