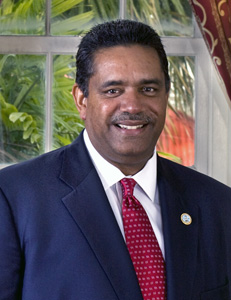 As the elected governor of the United States Virgin Islands, I am charged with growing our economy and increasing our treasury’s revenues. Unfortunately, the recent Washington Diplomat article titled “Caribbean Rum Wars: Brewing Tax Battle Stirs Frustration With U.S.” in the February 2013 issue fails to accurately portray both the underlying legal and economic bases for the initiatives I have undertaken on behalf of our territory.

For almost 60 years now, rum produced in the U.S. Virgin Islands and sold into the United States market paid an excise tax that was, in turn, returned (or “covered over”) to the American jurisdiction where it was produced. We are a political jurisdiction of the United States, and the U.S. Constitution places the obligation to administer its territories squarely on Congress. This is precisely why Congress enacted the U.S. Rum Cover-Over Program, to establish a consistent and reliable means of funding our local territory governments.

However, spearheaded by Barbados, the Caribbean ambassadors interviewed for The Diplomat article claim that the U.S. cover-over program is in violation of World Trade Organization (WTO) rules. They maintain that, because the U.S.V.I. is not a part of the United States, the shipments of our rum to the mainland are prohibited exports. Yet their entire argument is founded upon falsehoods.

There is no prohibited export subsidy involved in the U.S. cover-over program and the U.S. Virgin Islands’ use of it. When the United States joined the WTO, it did so on behalf of its 50 states and territorial possessions, including the U.S.V.I. Therefore, rum shipped from the U.S.V.I. to the U.S. mainland is not an “export.” And without an “export,” there simply cannot be an export subsidy.

Everyone in business knows that in order to make money, you must invest money; capital is essential for economic growth and stimulus. What I have done as governor is to utilize a longstanding U.S. economic tool in an innovative way, generating millions of dollars in new revenues during a period of intense economic stress and contraction.

When I first took office, I understood the key to economic growth in our islands, and indeed the entire Caribbean region, lay in the government coordinating its efforts and aligning its policies with the goals of those in the private sector, businesses that could provide the employment and revenues we desperately need. In our public-private partnership with Diageo, which produces Captain Morgan, and Beam, which produces Cruzan Rum, among others, we teamed up to ensure that these companies could commit to producing their fine products in the U.S.V.I., both now and for many decades to come.

As a result, their expansion has returned millions of dollars of additional tax revenues to the U.S. Virgin Islands, money that is going directly to fund our public needs and responsibilities. And it is no exaggeration to say that without our partnerships with Diageo and Beam, many Virgin Islanders would have suffered far worse during the years of the Great Recession and the global financial crisis of 2007 to 2009.

Over the past few years, we have floated hundreds of millions of dollars of bonds based on future rum cover-over revenue to make up for the dramatic loss of revenues, a direct result of the global economic collapse felt so acutely here in the Caribbean. These bonds are now keeping our schools and hospitals open, police on the streets, and supporting essential capital projects. And these bonds are being repaid with the cover-over revenue generated by Diageo and Beam rum sales within the U.S. market.

Although the U.S.V.I. has been able to weather the recent economic storm, we now face an equally dire crisis: the closure of the Hovensa oil refinery on St. Croix, our largest employer, and the elimination of more than 2,000 jobs. The results have been a nearly 5 percent jump in year-to-year unemployment and a loss of as much as $100 million in government revenue. Because of this economic blow, the rum cover-over program is playing an essential role in helping us to invest in key health care and infrastructure initiatives, maintain solvency, and pay for urgent social services. Everyone in our territory knows that without the growth in our rum cover-over revenues, we would not be able to survive this latest crisis.

While the ambassadors included in The Diplomat’s article eagerly disparage the U.S. cover-over program, they see no contradiction in accepting money from tax and incentive programs in which the U.S.V.I., as a U.S. territory, cannot participate. I can only imagine their displeasure were I to publicly object, let alone mount a legal challenge, to any of the programs of assistance and aid now in place between those island nations and their former colonial possessors, Great Britain and France.

Moreover, I take special regional pride in the fact that Caribbean rum producers are now selling even more of their products in the United States. While CARICOM (the Caribbean Community) as a whole saw a 17 percent increase in its rum exports to the United States last year, Barbados in particular has enjoyed significant growth. The country is now riding a 31 percent leap in the volume of its U.S. rum exports. So much for the ambassadors’ claims that our expanding sales of rum to the U.S. mainland, promoted by our use of the cover-over program, are detrimental to the Caribbean.

So, to those who criticize our use of a congressionally established program that has been in place since 1917 without objection, I simply say that I am proud of what we have done and grateful that we did it when we did. To Diageo and Beam, I wish ever-greater success. And to all private businesses, including those in the rum industry, I would say that we in the U.S. Virgin Islands welcome all who come to our shores seeking to succeed in ways that are consistent with our laws and public policies, and are respectful of our people, our history and our culture.

John P. de Jongh Jr., raised on St. Thomas, is the seventh elected governor of the United States Virgin Islands. He has also served as executive director of the Virgin Islands Public Finance Authority, commissioner of finance, and member of the Industrial Development Commission. The views expressed here are his own.