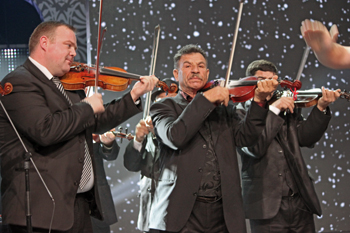 A national playground for Washingtonians and tourists alike, the iconic National Mall stretches nearly two miles from the Capitol to the Lincoln Memorial. Designed by Pierre L’Enfant in 1791, it was intended to be a garden-lined “grand avenue” that would run west from the Capitol to a point directly south of the president’s house.

Though L’Enfant’s vision never fully materialized, the Mall today is a grand space of American pride. Framed by monumental architectural gems, dotted with trees and packed with people, this verdant expanse is also the epicenter of the Smithsonian Folklife Festival.

The Smithsonian Institution’s Center for Folklife and Cultural Heritage presents the 10-day event every year in early summer to acquaint the public with cultural traditions from around the world and at home. Since its inception in 1967, the festival has showcased more than 90 nations, every region of the United States, scores of ethnic communities, and some 70 different occupations, from musicians to craftsmen to storytellers.

This year, the festival features three programs: “Hungarian Heritage: Roots to Revival,” “One World, Many Voices: Endangered Languages and Cultural Heritage,” and “The Will to Adorn: African American Diversity, Style, and Identity.”

“We bring our participants — craftspeople, musicians, artists, dancers, storytellers — and visitors together so they can meet and converse with each other,” said James Deutsch, curator in the Center for Folklife and Cultural Heritage and co-curator of the Hungarian program.

The festival’s premise is that people learn best with one-on-one interactions. “We don’t use media or cameras or hand-held devices. We give you the real person,” he said. “Where else could you meet a shepherd from [Hungary] who is preparing mutton stew?”

Here’s a look at what else you’ll encounter on the Mall this summer:

István “Dumnezeu” Jámbor will be one of three featured Gypsy lead fiddlers at the Smithsonian Folklife Festival, performing with István Pál’s Szalonna and His Band, as part of the program “Hungarian Heritage: Roots to Revival.”

Hungary is a 1,000-year-old European country, slightly smaller than the state of Indiana, with a population of 10 million. Some 3 million Hungarians live throughout Central Europe, while the United States is home to a formidable presence as well, with about 1.5 million Hungarian-Americans.

More than 100 Hungarians — or Magyars — will travel to the Folklife Festive in Washington, most for the first time, to share their distinctive traditions in music, dance, crafts and dining.

Architect Józef Siklósi designed the open-air space on the National Mall for the Hungarian section, which will showcase fiddlers, cooks, textile embroiderers and saddle makers. Meanwhile, in the “Budapest Bistro,” eight authentic Hungarian dishes plus four native wines will be on tap.

Hungary’s long history and location in Central Europe means it has been influenced by a cross-section of different cultural heritages living together, said Ágnes Fülemile, anthropologist and co-curator of the exhibit.

A strong revivalist movement called the táncház, or dance-hall movement, is in vogue now. It has evolved since the 1970s and is credited with bringing traditional village dances into urban areas, not only in Hungary but other nations such Romania, Serbia and Slovakia.

“This keen interest in authenticity has revolutionized the concept of Hungarian dancing and music,” said Fülemile, “and now there are dance clubs and communities all over the country.”

The revivalist movement has also swept up craftspeople in cities and rural areas doing traditional handwork such as candle dipping, blue dying, bridal wreath making and oven building, all which will be on display.

Music, too, will be a focal point. Among the performers are the Tükrös Ensemble and Heveder Ensemble, which play village music from Hungary and Transylvania, and Parno Graszt, an interpreter of the Roma culture.

Folk art has even seeped into cutting-edge fashions in Hungary, which in the early 20th century was a fashion design pioneer, much like Paris. Today, designers such as Tünde Hrivnák are resurrecting Hungary’s fashion industry. Hrivnák presented her “BY ME” label at an invitation-only embassy fashion show held in conjunction with the festival.

The Will to Adorn 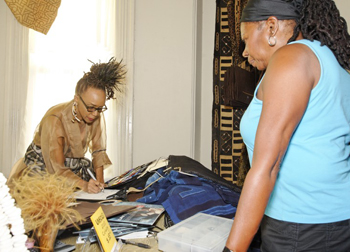 Brenda Winstead is a clothing designer whose fabrics are woven, dyed and painted by hand. Her Damalli collection will be featured at the Folklife Festival as part of “The Will to Adorn: African American Diversity, Style, and Identity.”

Diana Baird N’Diaye, an anthropologist, folklorist and curator of this exhibit, was effervescent with excitement as she talked about this first-ever Smithsonian program focused on African American dress.

“Dress and self-presentation have always been very important in the African American community,” she said. “Even during slavery, whenever possible, people would show their identity and dignity as human beings with dress and grooming.”

During the Civil Rights movement, for instance, organizers encouraged marchers to dress in their Sunday best. The result is a vast collection of photojournalism from the 1960s depicting women in heels and men in suits. “This is very powerful,” said N’Diaye.

It continues to be a powerful artistic statement that all of us make each day, she said. “Every morning we go into our closets and decide what to wear. We go to our hair stylist and decide how to do up our locks. We decide how we want to present ourselves to the world.”

The program looks at dress, style and body adornment as personal expressions of creativity through hands-on workshops with hairdressers, jewelers and tailors, as well as performances by dancers, activists, athletes, poets and others.

The display is also wide-ranging, from ladies’ church hats in the South, to the hijab head-covering prevalent in the Arab world, to hip hop dress culture among young people in Japan, Australia, Great Britain, South Africa and elsewhere.

One World, Many Voices

You probably do not know that we, the global population, face a language crisis. Of more than 7,000 languages in the world today, half are endangered and may go extinct this century.

But if you visit the Folklife Festival, you will meet language warriors fighting to keep endangered languages alive. Through arts, craft, food, dance and across the digital divide, these determined individuals are raising awareness about why preserving ancestral tongues matters.

“Many languages aren’t written down but are kept alive in people’s hearts and minds,” said K. David Harrison, co-curator of the exhibit and linguistics professor at Swarthmore College whose research focuses on endangered and little-documented languages. “There’s an immense knowledge base in language.” 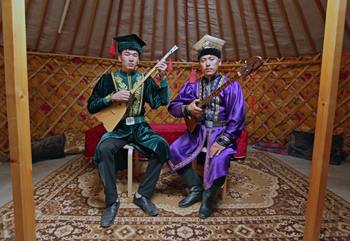 Virtuoso musicians Dmitriy Sharayev and Viktor Batyrovich Okchayev are among the many young people who are leading a revival of the Kalmyk language and culture in the Republic of Kalmykia in the Russian Federation.

For example, the language of Tuvan stone carvers from Siberia intimately connects to their landscape and informs us about their nomadic ways of life, while Bolivia’s Kallawaya people know about plants that can cure or alleviate sickness, which we may never know if we cannot communicate with them.

Language also provides a framework for looking at world problems and potentially offers keys to saving plants, animals and natural resources that are endangered, said Harrison.

To do this, Harrison suggests celebrating multilingualism and recognizing it as an asset. “Knowing more than one language makes one smarter and more creative and enables one to solve problems in a more imaginative way,” he said.

On the National Mall, visitors will be able to hear firsthand from faraway communities, including a small group of rice farmers from remote northeastern India who speak a language, Koro, that was not even globally recognized until just a few years ago.

The direct contact should prove to be eye opening. The Tuvans, for instance, conceptualize time and space differently than we do, believing that the past is before them physically and the future is behind.

“The idea of the Folklife Festival is a museum without walls,” said Harrison.