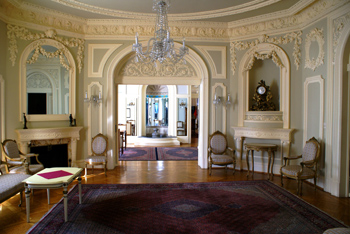 The nation’s capital boasts many famous landmarks — the White House, Lincoln Memorial, Washington Monument — but its elegant embassies are often overlooked despite their distinctive blend of period architecture, historical significance and cultural heritage.

These foreign missions take pride in showcasing their presence on an ever-changing Washington landscape, where modern glass structures and a new kind of urbanism have emerged as the norm. But many of the city’s embassies and diplomatic headquarters remain living histories of a bygone building era — housed in grand structures that have been preserved to maintain their character and significance, albeit sometimes far removed from their original owners.

To preserve its historic character, few structural changes have been made to the 100-year-old building on 16th Street that houses the Embassy of Poland since the Polish government purchased it in 1919. remain living histories of a bygone building era — housed in grand structures that have been preserved to maintain

Polish government purchased it in 1919. remain living histories of a bygone building era — housed in grand structures that have been preserved to maintain

These buildings represent a time when meticulous attention to architectural detail and craftsmanship reigned supreme. Features like intricate moldings, carefully etched stained glass and mosaic tiles were prized commodities in the residences and businesses of Washington’s powerful elite, especially in the late 1800s and early 1900s.

Today, many of these mansions have become foreign missions where conference rooms are adorned with elaborate woodwork and offices are furnished with symbolic antiques. Here, traditional Federalist and Victorian designs provide a striking backdrop to the modern-day business of diplomacy. And here, the unique stories behind these buildings are a source of pride for many foreign governments, who oftentimes acquired some of D.C.’s most prized architectural treasures at rock-bottom prices long before the nation’s capital became a true capital city.

The majestic Embassy of Indonesia, for example, was purchased by the Indonesian government in 1951 for $335,000 — a steal given the original construction costs. In fact, gold mining magnate Thomas F. Walsh built the house for $853,000, moving in with his wife in 1903. The beaux arts-style mansion offered a glittering setting for many social and political functions at the turn of the century. But its real fame comes as being the property of Evalyn Walsh McLean, known as the last private owner of the notorious 44 and a 1⁄2-carat Hope Diamond — the sale of which was negotiated at the Walsh mansion by Pierre Cartier, the famous jeweler. 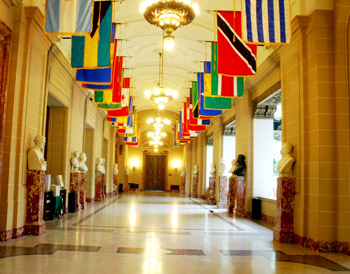 Such storied history is also plentiful along 16th Street, which lines the Adams Morgan and Mount Pleasant neighborhoods, where a string of early 20th-century dwellings were dubbed the “avenue of presidents” by one senator’s wife. The street begins just north of the White House across Lafayette Park and stretches all the way into Maryland.

Early on, foreign governments located their embassies along 16th Street because of its proximity to the White House. Religious organizations followed suit by building churches to serve symbolically as embassies, thus earning the street the nickname “Church Row.”

And although many more foreign missions moved to the better-known “Embassy Row” along Massachusetts Avenue, 16th Street remains home to a notable collection of some of the city’s largest embassies.

Among them is the Embassy of Poland, which has remained in the same location for 100 years — the longest of any embassy in Washington.

Few structural changes have been made to the four-story dwelling since the Polish government purchased it in 1919, and the interior rooms are almost identical in appearance to their original state despite the occasional necessary refurbishment over the years. An upstairs salon is painted the same shade of pale blue; an adjacent sitting room is adorned with the same decorative fountain placed there by the original owners. 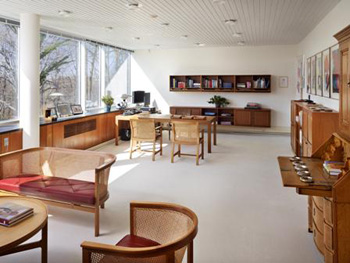 Built in 1960, the Royal Danish Embassy on Whitehaven Street, just off Massachusetts Avenue, recently celebrated its 50th anniversary as the first modern embassy building in Washington.

The inevitable signs of age — a few cracks in the wall, slight tarnishing of the fountain’s surrounding mirrors — give the rooms the kind of character that can only be found in a traditional residence.

Still, the melding of cultures lends the building a stately ambassadorial feel, more like a museum than a home — albeit a functional one. Inside the Blue Salon, walls are adorned with works by famous Polish artists, while the ballroom is decorated with an impossible-to-miss 1938 mural that portrays important moments in Polish history.

It is these touches that really translate the intercultural nature of embassies, which must serve as dignified offices for diplomats, cultural centers for exhibits and events, as well as museum-like microcosms of local history.

In addition to the Polish Embassy, two other local missions are marking important anniversaries this year.

The Washington headquarters of the Organization of American States (OAS) — which celebrated the building’s 100th anniversary in late April — is like an art exhibit, history lesson and architectural study all wrapped into one.

Inside the stately OAS headquarters along Constitution Avenue, crucial international discussions often take place around a century-old, 25-foot-long table crafted from a single piece of mahogany. OAS representatives sit on 22 high-backed chairs (crafted from the same Dominican tree as the table) upholstered in Spanish leather and carved with member country seals. 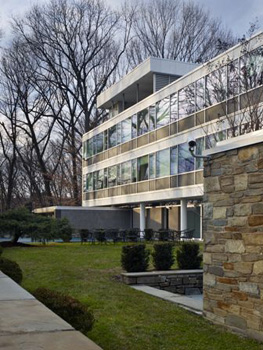 The molding on the ceiling, meanwhile, is adorned with elaborate symbols of peace in the Americas. The walls are covered in gold brocade, Aztec-inspired metal sconces, and handcrafted gilt relief panels depicting important moments in history. And that’s just in the Francisco de Miranda Room, one of the building’s smaller boardrooms.

It’s the kind of splendor that could only be possible with funding from a philanthropist like Andrew Carnegie, as well as years of scrupulous restorations.

The “peace tree” in the main building’s central courtyard is indicative of the painstaking preservation that has kept the 43,000-square-foot structure, located between the White House and National Mall, in top condition all these years. The carefully pruned, two-story-high fig and rubber hybrid was just a sapling when it was planted by President William Howard Taft in 1910. Today, it towers over South American landscaping, a central fountain and tiled flooring ornamented with Mayan and Honduran designs.

Roaming the hallways and rooms today, it’s easy to get swept up by the OAS building’s captivating designs and craftsmanship. This includes floors and stairwells of rare marble, a vibrantly colored ceramic drinking fountain, hand-carved statues of homeland heroes, and ceilings that reach 45 feet in the Hall of the Americas — the venue for many diplomatic receptions and functions.

The neighboring residence (now the Art Museum of the Americas, operated by the OAS) includes an enclosed patio adorned with waves of blue wall tiles, along with a large garden and reflecting pool overlooked by a five-foot stone statue of the Aztec god of flowers. Even the underground passageway is significant: It’s one of the world’s longest painted tunnels, with a preserved 530-foot-long mural created in 1960 by Uruguayan artist Carlos Páez Vilaró, a friend of Pablo Picasso.

At the other end of the spectrum is the Royal Danish Embassy on Whitehaven Street, just off Massachusetts Avenue. Built in 1960, it was considered the first modern embassy in Washington. That structure’s 50th anniversary was the subject of a recent symposium on the “architecture of diplomacy” hosted by the National Building Museum.

“Since I have the privilege of living in the embassy for almost five years, I’ve come to not just appreciate the beauty of the architecture, but especially the functionality of the building,” said Danish Ambassador Friis Arne Petersen, who will be wrapping up his posting soon after nearly five years in Washington. “The embassy is also a very transparent and wonderful building with a lot of light and glass. So it’s a bit like living in an aquarium.”

Frederik André Henrik Christian, the crown prince of Denmark who was in town for the anniversary celebrations, noted the link between architecture and democracy.

“Increasingly, embassies are looking to show a more contemporary side of their country. One of the best examples of this is the Danish Embassy here in the city, which was built by my father in 1960,” he said. “In the years following World War II, Denmark’s relations with the United States were intensified. The Danish government wanted to solidify our ties and build a stronger relationship with the United States.

“In those days, as was the case everywhere, embassies in Washington were typically placed in old traditional mansions. Denmark wanted a different direction [since] we were building for future Danish-American ties,” the prince explained. “Today, the Danish Embassy stands as the prime example of Danish architectural tradition — and an example of how an embassy can project the values of the culture of a country in a positive way.”

Situated on a hilltop overlooking a park, the Danish mission suggests coziness rather than grandeur. “It makes an impression through its simple, strong lines,” he said. “It is not made to inspire wonder, but rather to make you feel at ease.”

Richard N. Swett, an architect and former U.S. ambassador to Denmark, said that country was only the second in the world (after Morocco) to recognize the newly independent United States, and that several Danes were among the handful of architects who established the American Institute of Architects back in 1857.

During his three and a half years in Copenhagen, Swett coined the phrase “design diplomacy” to refer to the process of understanding how countries relate to each other artistically, culturally and architecturally.

“Denmark has a tremendously exemplary approach to this incorporation of politics and culture,” said Swett. “This aspect of Danish culture can be so effective and helpful to the issues and concerns that we in America have as we try to build our world hopefully in a successful manner.”

Kent Martinussen, director and chief executive officer of the Danish Architectural Centre in Copenhagen, added that the Danish Embassy here “reflects in many way the core values of Denmark’s modern architectural tradition. It was the wish of the Danish government and the then-Danish ambassador to the United States, Henrik Kauffmann, that the building would reflect Danish values.

Jane Loeffler, author of the coffee-table book “The Architecture of Diplomacy: Building America’s Embassies,” has been at the forefront of U.S. embassy construction worldwide. She noted the unique similarities between the Danish Embassy in Washington and the U.S. Embassy in Copenhagen, designed in the early 1950s by a young modernist of that era, Ralph Rhapsody.

Yet in an age of terrorism and constant worry about security, Loeffler suggested that perhaps design for beauty’s sake has taken a back seat.

“One wonders if there is any commitment to, or understanding of, cultural diplomacy,” she mused. “Outstanding design is a positive public gesture, at the most, goodwill, and they ultimately work to enhance security. The significance of all the elements of design … and how that is interpreted in today’s insecure world remains to be seen.”

Perhaps, but for quite a few embassies in town, they’ve already seen how powerful their sheer presence can be when it becomes woven into a city’s social fabric and history over the past 50 or even 100 years — as they no doubt hope their missions continue to be anchors in a changing urban landscape for decades to come.

B’anca Glenn and Heather Mueller contributed to this report. This story is the first in a three-part series on how foreign embassies and ambassadorial residences enhance the landscape of Washington, D.C. The next story will profile several new missions in town.

Heather Mueller and B