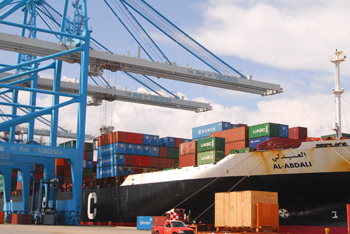 NORFOLK, Va. — Norfolk International Terminals (NIT), as seen from the 10th-floor observation deck of NIT’s operations tower, certainly lives up to its lofty name. On the day we visited, Chinese-made ZPMC cranes were busy unloading the Kuwaiti-flagged, 50,000-ton Al-Abdali containership with the help of 30-ton straddle carriers made in Germany and Italy — which earlier that morning had transported stacks of 40-foot Zim shipping containers from Israel as well as boxes from the Evergreen shipping group in Taiwan.

The Virginia Port Authority, through its operations at Norfolk, Portsmouth and elsewhere in the Hampton Roads area, boasts one of the busiest shipping terminals on the East Coast. And thanks to a contract signed in early July, it will soon become even busier, says Russell Held, deputy executive director of development at the Virginia Port Authority (VPA).

Massive cranes unload the Kuwaiti-flagged, 50,000-ton Al-Abdali containership — with the help of 30-ton straddle carriers made in Germany and Italy — at Norfolk International Terminals in Virginia, one of the busiest shipping terminals on the East Coast.

“We’re acquiring the operating rights to the most modern, technologically advanced container terminal in the world,” said Held, referring to the 20-year leasing deal between VPA and APM Terminals, a Dutch consortium that operates 50 container facilities in 34 countries on five continents.

The lease is valued at $865 million, but will probably exceed $1.1 billion over its 20-year life span when inflation adjustments are taken into account, Held told The Diplomat. The Port Authority will pay APM roughly $37 million annually, as well as a bonus payment for container volumes of more than 500,000 a year.

“APM invested half a billion dollars in this facility, which opened in 2007. But then the bottom fell out of the economy,” Held said. “The company was moving only one-third of its capacity, and we were suffering too.”

Interviewed at VPA’s Norfolk headquarters, Held explained that “we and APM were going after the same business coming into Virginia, but we have most of that business locked up in 10-year contracts.”

About 18 months ago, he said, the two entities “began talking about ways to possibly work together without killing each other in the process. We concluded that a lease was the best way for APM to go.”

VPA says it’ll be able to handle around 4 million TEUs a year, nearly double the 2.1 million TEUs shipped through Hampton Roads in 2007, the peak year before the recession hit the global shipping industry.

“The technology used at this new APM terminal is unlike any other in the world,” said Held. “Probably fewer than 30 people work there. Much of the cargo handling is done from inside the administration building from desks and joysticks. Everything is assigned a GPS number as soon as it comes off the vessels. There are many fail-safes built in, and they use cassettes to pick up containers and take them to the railways. They have literally thought of everything.”

And even though the new terminal itself employs relatively few people, the increased efficiency and cost-competitiveness will create jobs far beyond the terminal perimeter — from drivers to warehousemen to freight forwarders.

“Because port investment is such a big and long-term prospect before you get a return, they tend to be public entities. In most areas, cities or states build them and then lease them to private operators. But I don’t know of another example where a private company has built a terminal and then a government has leased it,” Held said.

Added VPA Executive Director Jerry Bridges: “This is, in my estimation, a grand-slam home run for all the parties involved. This is one of the biggest transactions in the history of the Port of Virginia.”

The port plays a vital role in supporting the growth of distribution centers throughout Virginia. These include everything from Dollar Tree stores in Chesapeake to the Home Shopping Network in Roanoke. Other major users of the port include: Walmart, Food Lion, Sara Lee Coffee & Tea Co., Target, Hanes, Volvo and Stanley Furniture.

According to an economic impact study by the College of William & Mary’s Mason School of Business, the Port of Virginia in fiscal 2006 generated total revenues of $41.1 billion; employee compensation of $13.5 billion; some 343,000 jobs (or 9 percent of Virginia’s workforce); and $1.2 billion in local tax revenues.

Held says VPA’s biggest competitors are New York, because of that city’s excellent rail connections, and to a lesser extent Charleston and Savannah. The Port of Baltimore isn’t a real rival, he noted, “because you’ve got to sail 12 hours up Chesapeake Bay and 12 hours back, whereas we are just 18 miles from open water.”

Baltimore’s strength is in automobiles, and the number of autos handled by that port has jumped by 16 percent this year from the same time in 2009. It’s expected to rise even further as Ford Motor Co. imports more Ford Fiestas from its factory in Mexico.

“Ford’s decision to bring more cars to Baltimore is another good sign for Maryland as we begin our recovery from the worst economic downturn since the Great Depression,” said Maryland Gov. Martin O’Malley in a recent statement.

In fact, the Maryland Port Administration recently announced that it handled more cars in March through Baltimore than at any time in the last 10 years. That month, 38,053 automobiles arrived at the port, compared to only 13,558 cars in January 2009.

Baltimore — which also serves as the primary port of entry for BMWs from Germany and Ford Transit Connect vans from Turkey — receives about 85 percent of the 35,000 vans imported into the United States annually. Last year, the port of Baltimore handled a total of 375,000 vehicles.

Indeed, the shipping industry as a whole seems to be weathering the economic downturn after bearing the brunt of the global financial collapse two years ago.

The recession for instance had clobbered the Peach State, yet a new study reveals that even during one of the worst economic downturns in 70 years, Georgia’s ports sustained jobs and increased their economic impact for the state.

“I am pleased to report that the ports of Savannah and Brunswick have maintained and created jobs for Georgia,” said Curtis J. Foltz, executive director of the Georgia Ports Authority. “The fundamental finding of this study is that the state’s strategic decisions to invest in our two deepwater ports have contributed to substantial economic activity in Georgia.”

According to that study, those two ports support more than 295,000 full- and part-time jobs, nearly 7 percent of Georgia’s total employment. This means that one job out of every 15 in Georgia is in some way dependent upon its ports. 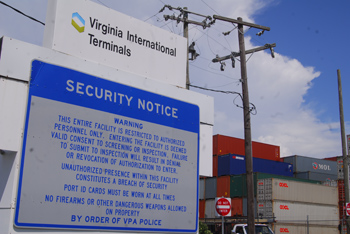 The Virginia Port Authority has its own police force to monitor all of the cargo coming in and out of its shipping terminals. And thanks to a new partnership with APM Terminals — a Dutch consortium that operates 50 container facilities on five continents — the Virginia Port Authority will boast the most modern, technologically advanced container terminal in the world.

Worldwide, container traffic has rebounded dramatically from last year, driven by a surge in exports from China since February. That’s contributed to a 23 percent year-over-year increase in Asia-Europe shipments in the first five months of 2010.

That market was forecasting single-digit growth just six months ago, according to Maersk, a division of APM. In response to the steep rise in traffic, carriers have boosted weekly capacity on routes from Asia to Europe, the Mediterranean and the U.S. West Coast by more than 85,000 TEUs this year.

The increase also fits in nicely with President Obama’s aim to boost U.S. exports. “The Obama administration’s efforts to double exports in the next five years is very noble,” said Virginia’s Held. “We’re fortunate that we’ve always had a pretty even import-export balance because you have loads of cargo moving both ways. However, for the last two years, we’ve seen exports much stronger than imports.”

Norfolk’s competitive advantage is helped by the fact that Virginia’s integrated transport system of highways, railroads, airports and seaports ensure accessibility to every market. The state has more than 70,000 miles of interstate, primary and secondary roads, including six major interstates.

Another feather in its cap is that 30 percent of its business enters and leaves by rail (with another 5 percent moving by barge to and from Baltimore, and the remaining 65 percent by truck). No other port in the nation moves so much of its cargo via railroads, noted Held.

Interestingly, said Held, “cigarettes used to be our number-one import and export item. They would import tobacco, mix it with domestically grown tobacco to make blends, send the sheets out for cutting, then make cigarettes, cigars and pipe tobacco,” he explained. “But fewer Americans are smoking, so that has forced some of that manufacturing offshore. We still grow plenty of tobacco, but we still export raw leaf — especially to China and Eastern Europe.”

Vito Piraino, vice president of Mediterranean Shipping Co. (USA) Inc., said his Geneva-based conglomerate is the world’s second-largest shipping company and one of VPA’s top customers, moving 15,000 to 18,000 TEUs a month in and out of Norfolk.

“This new lease agreement is very significant because we are one of the first lines that will move to the new terminal. We’ll have our first ship calling there at the end of August,” he said. “That means more productivity for our customers, because we’ll have the possibility of bringing in some of our largest ships.”

Held says VPA is ready for those ships. Norfolk International Terminal alone has eight ZPMC cranes, each of which cost around $6 million and can reach across 26 rows of containers on a single vessel — four more than the world’s biggest ships can currently handle.

So far this year, VPA’s overall volume is up 12 percent over last year, “and that’s after a loss of 16.2 percent last year,” said Held, who’s projecting 3.2 percent growth in revenues this year. 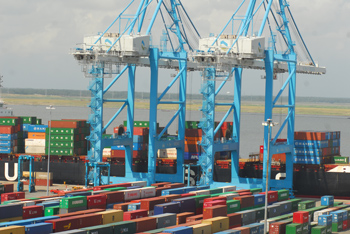 The APM agreement coincides with several unrelated projects that are all likely to boost container volumes at the Port of Virginia over the next 10 years. These include Norfolk Southern’s Heartland Corridor double-stack rail link to Chicago and Columbus, Ohio, which opens this September; the expansion of the Panama Canal, set for completion in 2014; and the arrival of post-Panamax container vessels in Virginia — the first of which, the MSC Tomoko — arrived in February.

Security is another very important consideration, especially in the post-9/11 era of intense scrutiny of all cargo entering the United States.

“It would be next to impossible to get into our port if you don’t have business there. We have our own security guidelines, overlaid by federal guidelines,” Held said. “We’re the only port I know of that has its own police force. We don’t contract with Brinks or Wackenhut [security services]. We have 85 police officers and we spend $5 to $6 million on security every year.”