Home The Washington Diplomat May 2017 From Disaster Relief to Gastronomy, Peruvian Wife Volunteers to Help Homeland 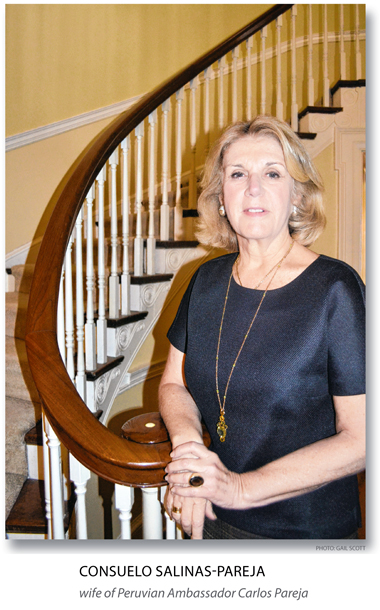 For many ambassador spouses, working overseas while their partner leads an embassy is a tricky proposition. Some jobs simply don’t travel well. Other times, government restrictions and red tape prevent spouses from working abroad.

For many spouses, volunteering their time to charities and causes becomes their full-time job, with commensurate demands and stresses.

For Consuelo Salinas-Pareja, wife of Peruvian Ambassador Carlos Pareja, volunteering is a vital commitment and a part of her informal job to help Peruvians from her perch in Washington. Most recently, her homeland suffered a devastating series of floods and mudslides that killed over 100 people and left tens of thousands homeless. An unusual bout of unremitting rain washed away bridges and homes, forcing hundreds of towns to declare states of emergency.

“We have had a real disaster with flooding in Peru. In some homes, some of the finest in town, the water is up to the ceiling on the second floor. In the poor neighborhoods, it is even worse. Our oceans are too warm. We have a campaign to raise money to help the victims,” Salinas-Pareja told us.

“You have to do it,” she said. “You have to be involved and be in touch with your own country. People are calling me from Miami to help and I put them in touch with our campaign. The embassy has information on Facebook, other social media and daily news. You have to believe your help is for good … I don’t work at the embassy, but I am in touch with people there who can make a difference. Every day I meet someone who can help.”

Salinas-Pareja has worked to help her countrymen long before the floods, raising funds for poor children and cancer patients.

Much of her time is spent volunteering in the arts. “Before I came here, I was involved in the National Museum of Women in the Arts. One month before coming to Washington, I held a luncheon for the museum. We have our own chapter like many countries do. Veronica Ferrero, wife of former Peruvian Ambassador Eduardo Ferrero, helped get it started. We have a network with Washington,” said Salinas-Pareja, who serves on the NMWA Board.

Now she and her sister, both art aficionados, are planning an art fair and participating in the annual juried show “Women to Watch,” in which international NMWA members submit the work of five artists from their home countries. 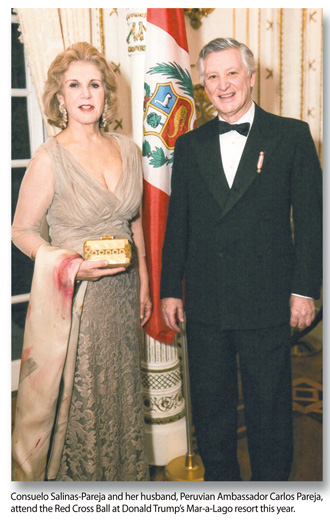 She is also busy with the Friends of the Art Museum of the Americas, located on the grounds of the Organization of American States (OAS). “It is a very fine collection. We had a benefit concert here in the residence to raise funds. We are planning a catalogue,” she noted.

Other work in the arts includes serving on the board of the Friends of the Lima Art Museum and the ArtLima festival for the past three years. Besides her work in the arts, she headed two nonprofit organizations for diplomatic wives during her husband’s postings in Peru and Chile, where she also promoted Peruvian fashion designers. In addition, she has planned cultural, gastronomical and wine events for Christie’s Auction House and organized the Ivy Inter-American Foundation Peruvian bazaar to help youth in the Americas break the cycle of poverty and neglect.

“You have to believe you help for the good of others,” she said. “It is interesting work, but it is so different here in D.C. because there are so many organizations.”

At the same time, Salinas-Pareja says governments should make it easier for ambassador spouses to work in their professions. Sometimes it’s not just a matter of career goals, but of practical necessity.

“They need to make the money. Everything is much more expensive today — you want to buy a house, send your children to good schools. That can be a burden for some,” she pointed out.

“Sometimes, American career diplomatic couples work in the same embassy. I like to see that happening,” she added. “Women are expected to leave their careers, their jobs. Sometimes they can’t get them back. This issue is not addressed [as often as it should be] — the possibilities of women and how useful they can be to your country.”

Salinas-Pareja worked before she was married. She attended boarding school in Spain, traveling throughout Europe, and returned to Peru to start college. “I really didn’t like it so I stopped and started working in tourism. I was in sales in airlines,” she recalled. “Besides airlines, I also booked cruises and hotels back in Lima.”

When she met her husband, who was studying diplomacy and foreign relations in Peru, the two clicked right away. “One night I was out with some friends and one of my male friends said to Carlos, ‘I am going to introduce you tonight to the girl you are going to marry.’ When I met him, it was so comfortable. We talked and had fun,” she recalled. “Three years later, we married. At home we have big weddings. Our parents arranged everything. You just dress and show up. We had an orchestra and 600 people!”

Carlos Pareja, whose father was an ambassador, held various posts at home, including head of Peru’s Directorate General of Africa, Middle East and Gulf Countries, chief of state protocol and national director of the Directorate General of Sovereignty and Border Development. He also served as ambassador to Chile, Spain and Switzerland, and was posted to Washington, D.C., as a political counselor from 1984 to 1990. 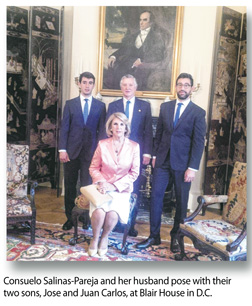 Their elder son, Juan Carlos, was born here. He is now 36 and an economist in Peru. Jose, 31, is lawyer who ran for Congress when he was only 25 and is still interested in politics.

Salinas-Pareja says Washington has evolved dramatically since they were here more than 30 years ago, praising the city’s architecture and neighborhood growth. “So many new areas have been developed and they are all related to each other. They were separated before, probably because we didn’t have the Metro then. Everyone is mixing more. There are a lot more young people going to places that weren’t attractive to go to before. Now, you can go to dinner everywhere. It’s a very good feeling,” she said.

“In comparison, Lima was planned to be small. We had immigrants from the Highlands who came to Lima…. There weren’t enough jobs for people. In the ’80s, we had terrorism. But now, things are good and we are building a subway.”

Like D.C., Peru has undergone a dramatic transformation. The country of over 30 million experienced political turmoil and a violent insurgency in the 1980s. The election of Alberto Fujimori in 1990 ushered in newfound prosperity and stability, but the president was a controversial figure who has since been convicted of corruption and human rights abuses.

The country has held several successful democratic elections since then, and poverty and unemployment levels have dropped significantly, giving Peru one of the best-performing economies in Latin America.

Salinas-Pareja says that one of Peru’s most colorful and best-known assets is its award-winning gastronomy. “Many people travel to Peru to go to our restaurants. We always had good food but now it is very creative. Peruvian chef Gastón Acurio created a movement. You understand Peru through its food,” she said. “We have rich ingredients and fruit and herbs.”

In addition to a TV program and cookbooks, Acurio now has 33 restaurants in 12 countries. Salinas-Pareja is currently supporting the fifth annual Taste of Peru in D.C., coming up on June 4 at the University of the District of Columbia. She said she is also delighted that the gastronomic guide she wrote in Chile about both countries’ restaurants has resulted in garnering recognition for Peruvian cuisine.

Salinas-Pareja clearly relishes being an effective promoter for Peru. “We have the Amazon, the mountains and the coast. Because of gastronomy, we have more tourists, new jobs, beautiful hotels and, of course, we have our Inca heritage,” she said, referring to Machu Picchu, the 15th-century Inca citadel that sits on a mountain ridge above Peru’s Sacred Valley and continues to be a major attraction for the country.

“Peruvians may not be rich but we have a rich cultural life. The family is very important. They are a hard-working people,” she said. “Peruvians are very proud of what they have.”