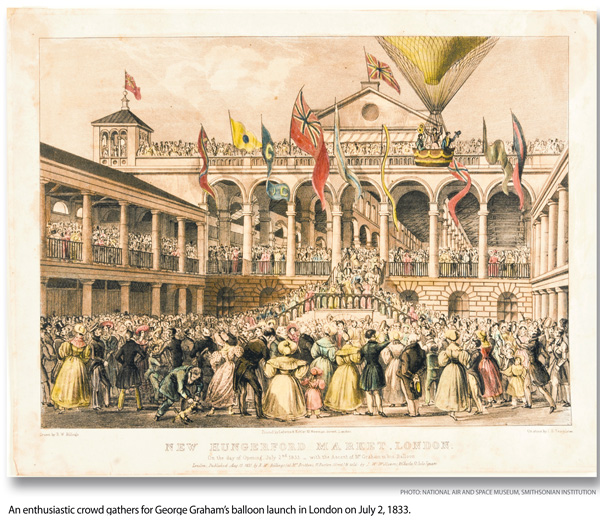 When early balloons rose into the sky — the first flight carried a sheep, a duck and a rooster before adventurous aeronauts took to the air — people went wild. The thrill of seeing these strange, giant balloons floating above their heads sparked a wave of “balloonomania” in the 18th and 19th centuries, and an impressive new exhibition captures the excitement surrounding the wonders of early flight.

“Clouds in a Bag: The Evelyn Way Kendall Ballooning and Early Aviation Collection” at the Air and Space Museum’s Steven F. Udvar-Hazy Center in Chantilly, Va., showcases remarkable prints, paintings and memorabilia exploring the fascination with hot air ballooning and giving visitors a vivid sense of the way balloonomania swept across Europe and beyond.

Tom Crouch, senior curator of aeronautics at the National Air and Space Museum, told The Washington Diplomat that he wanted to “tell the story of the invention of the balloon and its impact on the public.”

Notably, the Montgolfier brothers launched a large, unmanned paper balloon in the countryside near Annonay, France, in June 1783. Then they sent a wicker-basket cage of the animals up over Versailles in September 1783. A few months later, the first balloon rose over the rooftops of Paris. After these initial balloons went aloft, everyone “just went crazy,” Crouch said.

“People waited and waited for a millennia for flight to arrive,” Crouch said. “And suddenly, just overnight, there is the first little balloon on June 4, 1783, and then human beings are flying by the fall. People just become wildly excited.”

The show features dozens of wonderful pieces depicting the early efforts in the air. The oldest painting in the show, “Le Suffren” by Etienne Chevalier de Lorimier, illustrates a large balloon taking off from the city of Nantes in 1784. The oil painting dazzles in its opulent frame, highlighting the flight of the hydrogen balloon along with another treat for viewers. 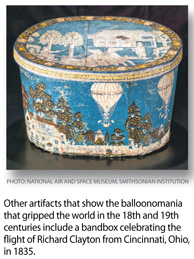 “If you know what you’re looking at, and I hope we tell visitors enough so they can see all this, you can see the equipment for inflating the balloon in the painting,” Crouch pointed out. “It’s really lovely.”

In one fantastic print that shows the first free flight by humans made on Nov. 21, 1783, museumgoers should take a moment to read the writing on the piece. It notes that it’s an etching of the view of the Montgolfier balloon as it goes by none other than Benjamin Franklin’s terrace in Paris.

“Just as the Europeans were getting excited about all this stuff, the Americans, from their point of view, had thrown off the chains of British tyranny. And here were these guys who are throwing off the chains of gravity — and the connection was not lost on these folks. Americans were just fascinated and delighted by the balloon,” Crouch noted.

Fantastical images are also peppered throughout the collection, with one print imagining a future balloon voyage to the moon and another suggesting what a massive aerial invasion of Great Britain might look like. Balloons were indeed used in war, and the show features one of the great American aeronauts of the 19th century, Thaddeus S.C. Lowe, who created the Balloon Corps for the Union Army in the U.S. Civil War.

“Throughout the show, we’re just trying to give visitors a sense of the excitement balloons engendered, and the various uses to which they were put — everything from public spectacles to spying on your enemy,” Crouch said.

English balloonomania is also well documented throughout the exhibition. One print shows George III, Queen Charlotte and their children witnessing a balloon demonstration at Windsor Castle, while several others emphasize the popularity with which balloons were greeted by people throughout the country.

“You couldn’t open a bridge or have a holiday celebration or anything in the 19th century without a balloon to go with,” Crouch noted. 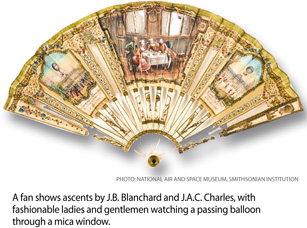 Early aeronauts were explorers and adventurers, bravely taking to the air, and sometimes things went wrong — disastrously wrong. For every impressive scientific breakthrough or record-breaking flight, the history of hot air ballooning is also dotted with accidents that range from the absurd to the truly devastating.

A would-be inventor’s parachute design failed during a test as he dangled below a balloon, becoming one of the most famous aeronautical tragedies of the era and the star of a series of English prints. Wannabe French aeronauts who claimed they would fly above Paris were still on the ground at 5 p.m. on the day of their promised July 1784 ascent, and the crowd set their balloon on fire. And the temptation to fly over water in the 19th century meant that those who took to the air were often never seen again, a common theme in a number of the prints on view. The possibility for tragedy or dramatic feats remained inextricably tied to the wonders of lifting above the Earth in a hot air balloon.

Along with the prints and paintings on display, the show highlights dozens of fun souvenirs that the balloon-obsessed of the 18th and 19th century coveted. Decorative fans, boxes and plates adorned with balloons celebrate this thrilling moment in history — and by the end of the show, you’ll wish you could buy some of the memorabilia yourself.

“You could put a balloon on a snuff box or a needle case, almost on anything, and they’d fly off the shelves,” Crouch said. “People were fascinated by the balloons.”

The marvels of early ballooning still fascinate today, and as viewers explore this singular exhibition they’ll find themselves seized with the same wild balloonomania that first took off over 200 years ago.

Clouds in a Bag: The Evelyn Way Kendall Ballooning and Early Aviation Collection