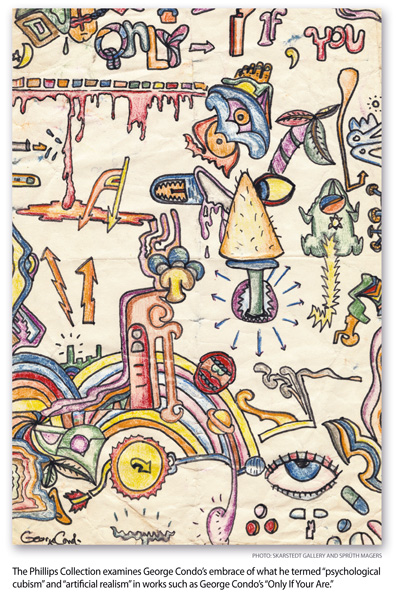 If Pablo Picasso had a living disciple, then George Condo would fit the bill.

“Picasso painted a violin from four different perspectives at one time,” Condo has said. “I do the same with psychological states.”

While Condo is more well known as a prolific painter, the Phillips Collection has amassed approximately 200 drawings, sketches and sketchbooks along with some “drawing paintings” in “George Condo: The Way I Think.” The exhibition, on view until June 25, offers an expansive view of the 59-year-old artist’s work, which blurs the lines between representation and abstraction. Condo embraces the grotesque and comical, reveling in a distorted carnival mirror of life where his reflections confound our expectations.

Condo has led a fascinating life, finding himself at the intersection of major art movements. He was a studio assistant in Andy Warhol’s factory in the 1970s, befriended fellow New York artists Jean-Michel Basquiat and Keith Haring, and moved to Paris in the 1980s. He collaborated with unconventional author William S. Burroughs in the 1990s and painted several different covers for Kanye West’s “My Beautiful Dark Twisted Fantasy” album in 2010. The final cover featured West having sex with a weird nude armless angel/phoenix/demon woman with white wings, feathered legs and a polka-dotted tail. West claimed the album was banned in Walmart, but that may have been the goal given his penchant for publicity stunts.

Condo pays homage to Picasso to an almost obsessive degree, and he coined the phrases “psychological cubism” and “artificial realism” to describe his work. Several drawings in the Phillips Collection exhibition, including a series called “Double Heads Drawing,” feature Picasso-esque portraits with faces emerging from a fractured maze of Cubist planes while glaring oversized eyes angle down toward maniacal grins. They aren’t that compelling because they look too familiar. We know what to expect because we’ve seen it before, and while it was revolutionary in Picasso’s time, it just seems derivative now. 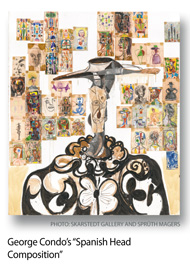 Condo’s work branches out more effectively into aspects of Surrealism, Abstract Expressionism and Pop Art in his own definitively weird stew. Some portraits and swirling scenes portray conflicting desires and uneasy psychological landscapes. In “The Discarded Human,” a beautiful nude woman’s body morphs sharply at her shoulders with a dislocated and darkened head. Only one menacing eye and two sharp rows of teeth emerge from the inky shadows. Her visage is both repulsive and attractive, combining lust, fear and dread in a primordial soup of raw emotions.

Some of Condo’s sketches are displayed salon style from floor to ceiling, including detailed drawings of dinosaurs inked in bright red or lime green when Condo was 7 years old in the 1960s. In the center of another room, more than 100 sketchbooks are stacked in rows under glass, creating a sense of mystery about their contents. Only a few are opened to reveal pages inside. One note dated Aug. 27 without a year includes just one cryptic sentence: “I feel better than I have ever felt in my life.”

A 2009 graphite-and-colored-pencil drawing titled “Study for the Fallen Butler” is a fascinating example of how a painting can transcend its conception. The drawing shows a debauched scene with a drunk tuxedoed butler slumped on the floor while raising his champagne glass toward the nude bottom of a woman bending over in a French maid costume. Drawn curtains behind them reveal a painting of rolling green hills beneath a cloudy sky. The setting may be a stately home while the master is away or the stage of a bawdy theatrical production, but the artifice is real, as Condo would say. 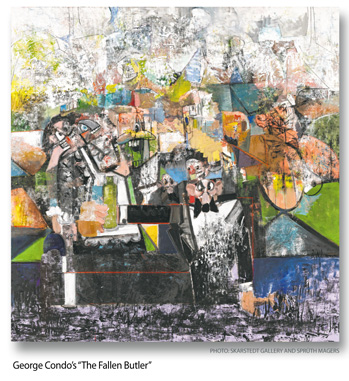 It’s difficult to compare the study for “The Fallen Butler” to the large painting that followed because they aren’t located near each other in the exhibition. They aren’t even on the same floor. Two rooms of Condo’s drawings and sketches are effectively displayed on the ground floor, but visitors then have to consult a map, climb a flight of stairs and walk past other exhibitions to find six of Condo’s large paintings shoehorned into a small, claustrophobic room next to the restrooms. The inclusion of the paintings seems like an afterthought in the bifurcated exhibition or a strange curatorial decision to downplay the paintings because the exhibition’s theme focuses on Condo’s drawings.

“The Fallen Butler” is worth seeing regardless of the location. The painting, on loan from the Museum of Modern Art, bears only a passing resemblance to the study as it transforms from a comical over-the-top scene into a more vivid, subtle abstraction. The butler, or part of him, is still visible hoisting a large green bottle, but most of the maid has disappeared into the jumbled background except for a disjointed head with glaring eyes perched atop an elongated neck. Other small floating faces peek out from a patchwork quilt of colors that threatens to overwhelm the main characters. While the title references only the butler, the painting is an ensemble performance. 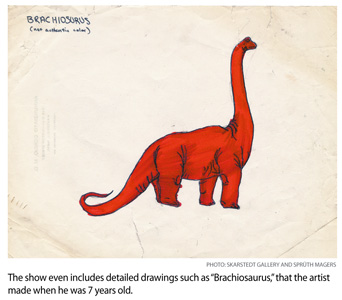 Another highlight is “Spanish Head Composition,” which combines elements of painting, drawing and collage. A central figure has a scribbled Picasso-esque face on a painted body wearing a wide-brimmed hat and a swirling shirt with a clownish collar. He is surrounded by portraits on paper that have been affixed to the canvas. The drawings vary in their style and complexity, running the gamut from more representational to abstract. Some of the small portraits appear to be studies for the large central figure, and the inclusion of the preparatory drawings in the final work offers a fascinating timeline or view of paths not taken.

To his credit, Condo has resisted being pegged into one style or artistic movement. “The only way for me to feel the difference between every other artist and me is to use every artist to become me,” he said.

His work pays tribute to Picasso, Jackson Pollock, Willem de Kooning, Francis Bacon and even 17th-century Venetian and Dutch paintings, but Condo has developed a signature style that explores our panoply of psychological states, ranging from humor and sexuality to our darker impulses mired in the shadowy pits of fear and loathing.

George Condo: The Way I Think